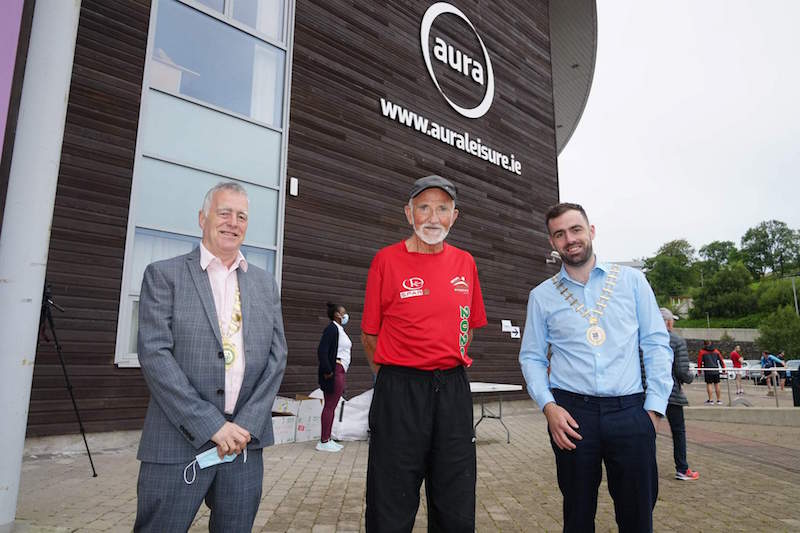 The locals who came out in large numbers to assist with the staging of the 2021 Donegal Half Marathon on Sunday morning in Letterkenny have been praised by the event’s ambassador, Danny McDaid.

“Once again the people of Letterkenny and Donegal came out in force to volunteer and help with the safe running of the Donegal Half Marathon,” commented the double Olympian.

The event, which was held in association with the Kernan Retail Group, was capped at 400 and was sold out in the middle of August.

“After all the uncertainty over the last couple of years, it was great to be back at the Aura Centre and organising a race with such large numbers,” he added.
In 2020 the race could only be held virtually because of the pandemic and that attracted 240 competitors.

“We weren’t sure how the virtual event would go, but it did turn out to be a good success and we raised €6,000 for the Acute Stroke Unit at Letterkenny University Hospital.

“To have the actual race back again has given the sport of athletics and the county a great lift and has helped to bring back some sense of normality for the athletes,” the Donegal Half Marathon ambassador said.

“This is a theme we are going to keep and develop over the coming years with Fáilte Ireland who we are delighted to have teamed up with. This year’s medal went down extremely well among all the finishers.

“The success of the Donegal Half Marathon is down to the support we receive from a number of groups and organisations. Kernan’s Retail Group were our main sponsor again this year and we work extremely well with them.

“We are also grateful to Donegal County Council, Optum, Donegal Sports Partnership, Donegal Volunteer Centre, Value Centre in Letterkenny, the Gardaí, the Red Cross and the teams of marshals and helpers who played a vital role on race day.

“As an organising committee, we’re delighted to have had the opportunity to stage the race. Hopefully, all the competitors left with a good memory and we look forward to welcoming them all, and more, back again next year when things are fully opened up.”

Sunday’s race was won by Mark McPaul who works at the Kernan’s store in Ramelton in a time of 71:11 and he was presented with the Dessie Larkin Perpetual Shield by the Larkin family. Victory in the women’s race went to Monica McGranaghan of Letterkenny AC in 90:03.