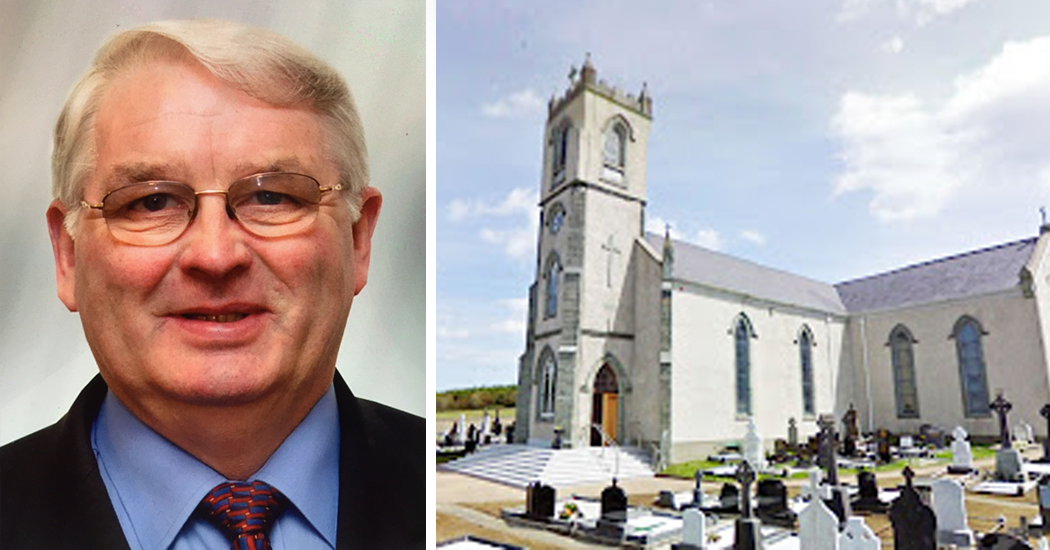 Donegal County Councillor Bernard McGuinness’ tireless endeavours, his passions and his faith were celebrated at a sorrowful Funeral Mass in Culdaff today.

The Fine Gael representative dedicated his life to his community, and his career has inspired generations of politicians who followed in his footsteps.

But it was Bernard’s personal attributes that were celebrated most at his Funeral Mass in St. Mary’s Church Bocan this morning.

“Our lives are not entirely our own, they are meant to be lived in the service of others and service makes love perfect.”

Outside of his public life, Bernard was a gifted singer and a devoted member of his parish choir, he was a farmer, a shopkeeper, a publican, a gardener, a community worker, a faithful parishioner, among many other roles.

Born on 8th February 1944, Bernard was the son of Johnny McGuinness and Mamie Doherty from Malin Head. Sadly, his mother died when Bernard was an infant, and he was reared by his father and his aunt Bridget.

Bernard was educated in Bocan and at the Boys School in Carndonagh. He furthered his education at the Technical School in Carndonagh, before beginning his working life in the bar and grocery business. He later became involved in politics and was first elected to Donegal County Council in 1979. He gave his heart and soul to public life, the Funeral Mass heard.

But the most important things to Bernard were his family and friends. Bernard celebrated his 50th wedding anniversary with his beloved wife Jan just a few weeks ago. Together they have five children and, as their family grew, Bernard became a doting grandad to his grandchildren.

“For a man who lived a tireless life, he found recreation in his garden. He was never happier than when he was in his garden listening to the birds and the bees,” said Fr McGonagle.

Bernard not only found peace and comfort in gardening, he found great rewards in beekeeping.

Mourners heard that a poignant tradition was upheld following Bernard’s passing, whereby his beekeeper friends and family tell the hive that ‘your keeper has passed on, feel free to stay or go.’

The Funeral Mass was followed by burial in the adjoining cemetery at St. Mary’s.

Countless tributes have been paid to the late Councillor McGuinness in the past week from community groups, political colleagues and Fine Gael leader, Leo Varadkar.

Bernard has been remembered as a figure who belonged to his community, and it is hoped that his life can be celebrated by all at a time of fewer restrictions.

May he Rest In Peace