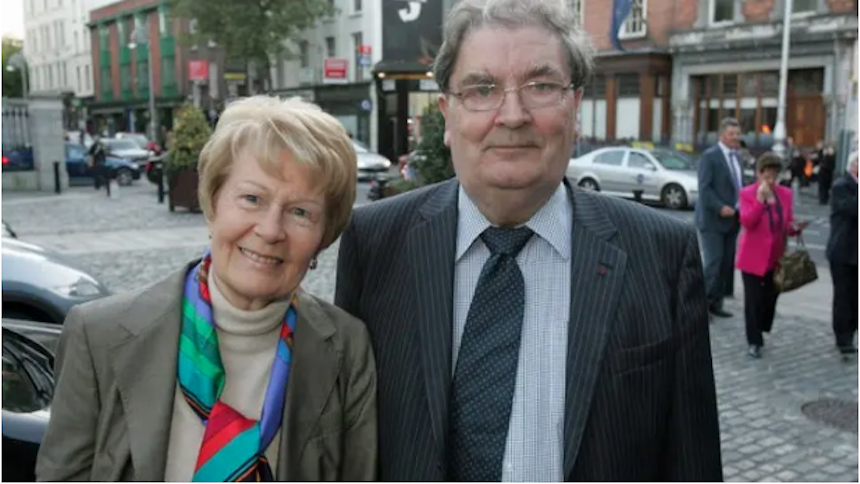 Funeral of Pat Hume to take place in Derry on Monday

THE funeral of Pat Hume, the widow of late SDLP leader John Hume, will take place on Monday.

Tributes have continued to pour in for Mrs Hume, a mother-of-five from Derry, who died at home after a short illness on Thursday, surrounded by family.

The death of Mrs Hume, a former teacher, comes just over a year after that of her Nobel Peace Prize-winning husband.

The death of the SDLP founder, who was a key architect of the 1998 Good Friday Agreement, led to a flood of tributes from around the world.

Requiem Mass for Mrs Hume will be celebrated in St Eugene’s Cathedral in Derry on Monday, at 11 am where her husband’s funeral took place last year.

A funeral notice asked that house and funeral will be private please due to current Coronavirus restrictions.

After Requiem Mass, which can be viewed live via the church webcam, Mrs Hume’s interment will take afterwards in the City cemetery.

Family flowers only please. Donations in lieu of flowers if wished to the Foyle Hospice, 61 Culmore Road, Derry, BT48 8JE.

Former US secretary of state Hillary Clinton was among those paying tribute to Mrs Hume, describing her as a “gracious, determined force behind the achievement of peace in Ireland”.

Mrs Hume had worked alongside her husband for several decades, from the beginning of the civil rights movement in the 1960s until after the signing of the Good Friday Agreement in 1998.

She later cared for him when he developed dementia.

She was awarded the Irish Red Cross Lifetime Achievement award in 2018 and a foundation honouring her and her husband’s peace and reconciliation work was launched last year.

A book of condolence in Derry’s Guildhall was opened by the mayor of Derry and Strabane, Graham Warke, on Friday.