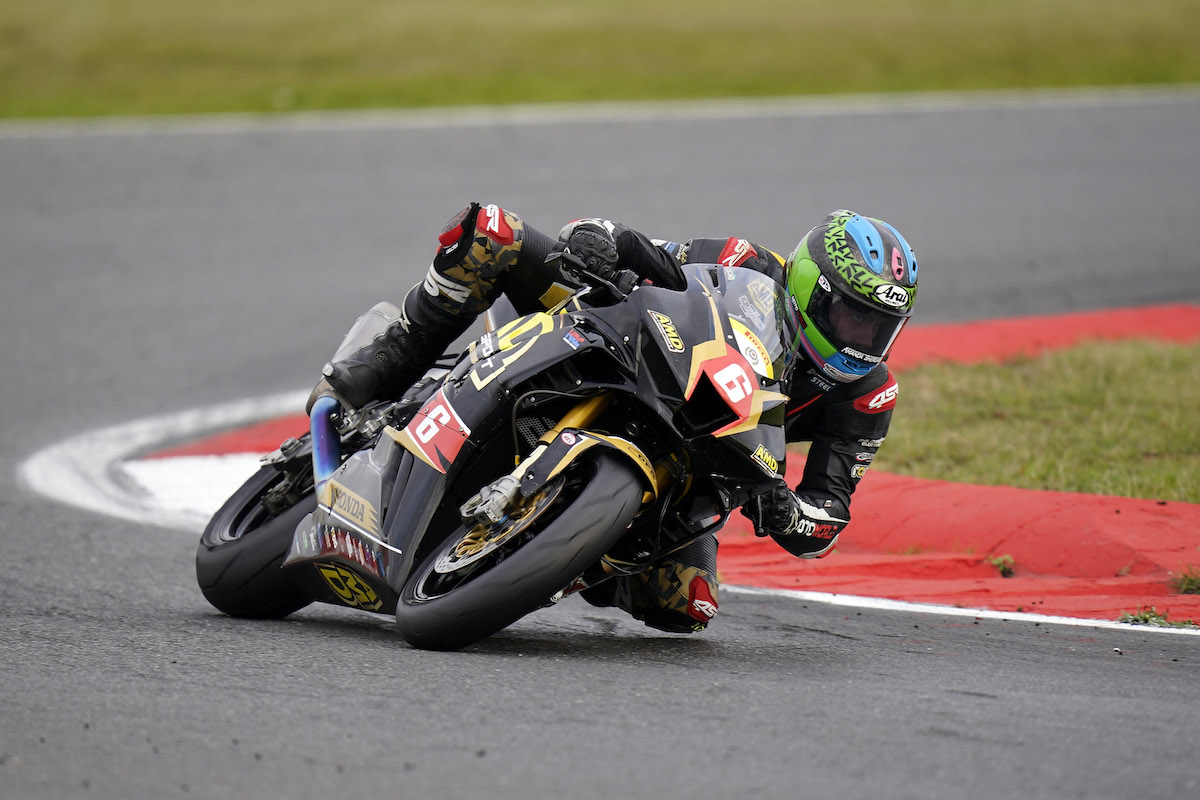 RICHARD Kerr and the Dumfries-based AMD Motorsport team took another strong top 12 finish at Snetterton, Norfolk in round seven of the Pirelli National Superstock Championship.

It was a fine display by the the Kilmacrennan rider, only running wide on the last lap denying him a place in the top ten.

Riding the factory-prepared Honda Fireblade, the 21-year old made a solid start to the weekend with the 18th quickest time overall in Friday’s free practice sessions, just 1.2s off the pace setter, Tom Neave.

Saturday’s qualifying session around the 2.96-mile circuit saw him improve his time by more than two tenths of a second but the competitiveness of the series could again be seen as he got shuffled back to 22nd place which meant an eighth row start for Sunday’s 12-lap race.

However, a brilliant morning warm-up on Sunday saw him place third quickest and lap six tenths of a second quicker than he’d gone all weekend. That put him in a confident mood for the race and a good start enabled him to complete the opening lap in 14th place.

With some good overtaking moves, this had become tenth by half race distance and on lap ten, he moved by Shane Richardson to take over ninth place. However, he was part of a five-rider group battling for eighth place and just when it looked like he’d score his second consecutive top ten finish, he almost clipped the back of Levi Day on the final lap and had to run wide which was enough to drop him back down the order to 12th.

Nevertheless, it was his fourth consecutive points-scoring finish inside the top twelve and moves him on to a total of 29 points after seven rounds.

Kerr said: “I’m happy enough with the result as although I could have ended with an eighth place finish, I could also have ended up on the floor! I felt strong enough to overtake Levi and got alongside him on the last lap but the bike was a bit unsettled on the brakes and I almost clipped the back of him. I had to back out of the pass but I almost crashed and that was what cost me the time and places on the final lap.

“Qualifying’s really crucial and due to traffic and a red flag, I wasn’t able to put in a better time which left me quite a way down the grid. I’m able to make good starts, which is gaining me a lot of places on the opening lap but if I can get higher up the grid and get away with the front group, I feel confident that I can run with them. That’s the aim for the next few rounds but it’s more points today and another good finish so big thanks to all the team and sponsors.”

Fraser Dykes, the team owner said: “It would have been mega if Richard had taken eighth place but we’re still over the moon with 12th and the run-off onto the grass is just one of these things that happen in racing. As has been the case in recent meetings, the bike’s working really well and Richard’s had really good race pace but qualifying is really essential. The red flag spoiled his efforts but I’m sure if he’d have been on one of the first four rows, the result would have been better still. Like I say though, we’re happy with the result and we’re in a good rhythm so let’s hope it continues at the next round.”

There’s no respite for the team with round eight of the series taking place at Silverstone, Northants next weekend.