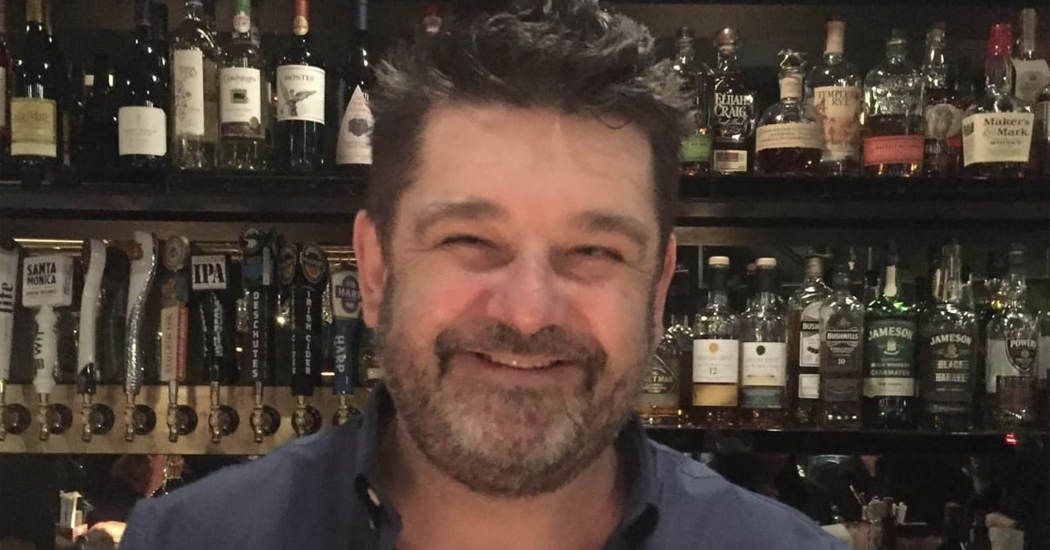 A Donegal man who followed his dreams of opening a pub in Los Angeles is serving up more success with his latest venture – an authentic Irish Fish and Chip shop.

“I guess I have been a 20-year overnight success,” laughed Kevin Kearns.

Born and raised in Inishowen, he moved to London at age 21, and happily ran an antiques shop and a second-hand furniture and appliance shop for several years. Then he won the green card lottery in 1995, and the chance to see America was one he couldn’t pass up.

“I didn’t really have a plan, but I grew up wishing for sunshine, and I guess the epitome of that lifestyle was Los Angeles and Southern California.”

He worked as a finance manager for GM for a while, but then one night he saw a touring version of the Marie Jones’s play A Night in November.

“A young Donegal actor played all 29 characters, and it inspired me,” said Kearns, 50.

“I was always an outgoing child, and it made me go back to acting classes. I did some plays, then a movie, and that got me a manager in L.A.

He worked on stage with Chris Pine (Star Trek) in Martin McDonagh’s Lieutenant of Inishmore, appeared in episodes of “Deadwood” and “Sons of Anarchy”, and as “Jimmy” in the amusing post-credits sequence in 2012 blockbuster Battleship.

However, that “never really satisfied the lion and the lamb,” says Kearns, who went to auditions during the day and worked at a number of Irish bars in Hollywood and Santa Monica at night.

As he developed a passion for food, wine and cocktails, another childhood dream – to open a bar – came back to him.

“But I was never interested in a “green shamrocks” kind of place. I wanted to do something completely different, but with a tip of the hat to Irish tradition. Somewhere you could have a Guinness or a martini, and maybe a cheese plate or fish and chips.”

Fast forward to November 2019, and the Auld Fella opens in Culver City, the home of several movie studios and many hungry film employees. 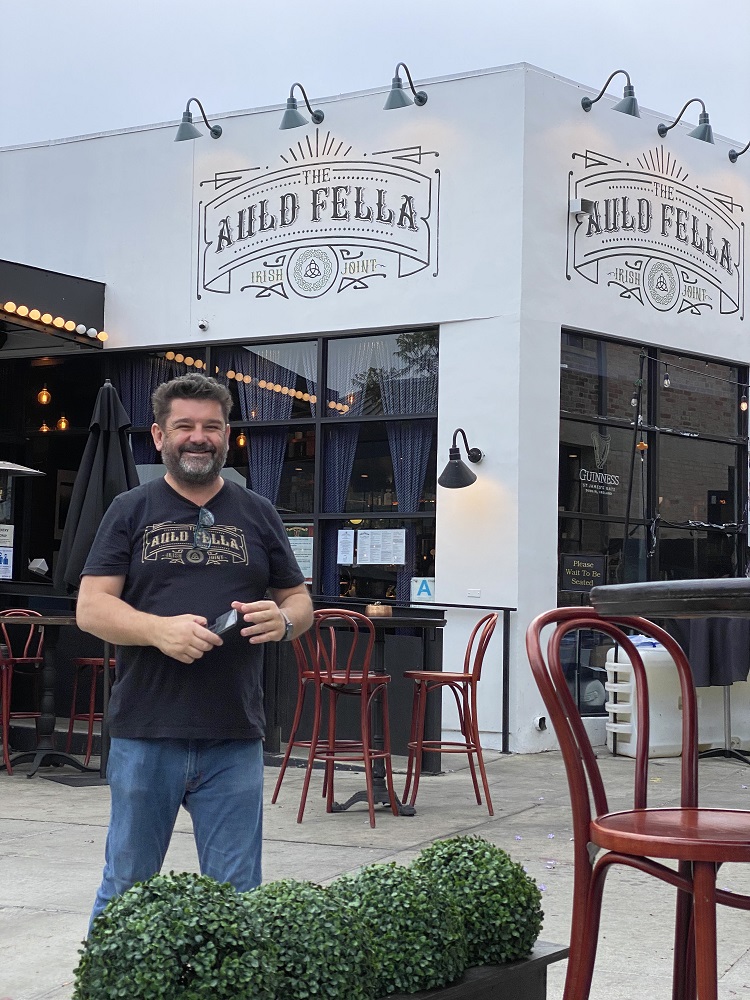 “Really we got lucky. We hadn’t incurred lots of debt, and were busy from the get-go. The Irish community is very spread out here in California, but they really embraced us – and locals too.

Though we were forced to close a few days before Paddy’s Day, which was disappointing to say the least, as we had had extra alcohol shipped in!”

A city-wide move to outdoor dining helped, and they reopened fully in February.

“We bought all the staff back, which was very unusual. I like to say we hire kindness, and the rest we can train.”

His newest venture – the Auld Chip Shop in Toluca Lake, near Universal Studios – has been another hit, especially with Irish and English expats, many of whom live in the area known as the San Fernando Valley. 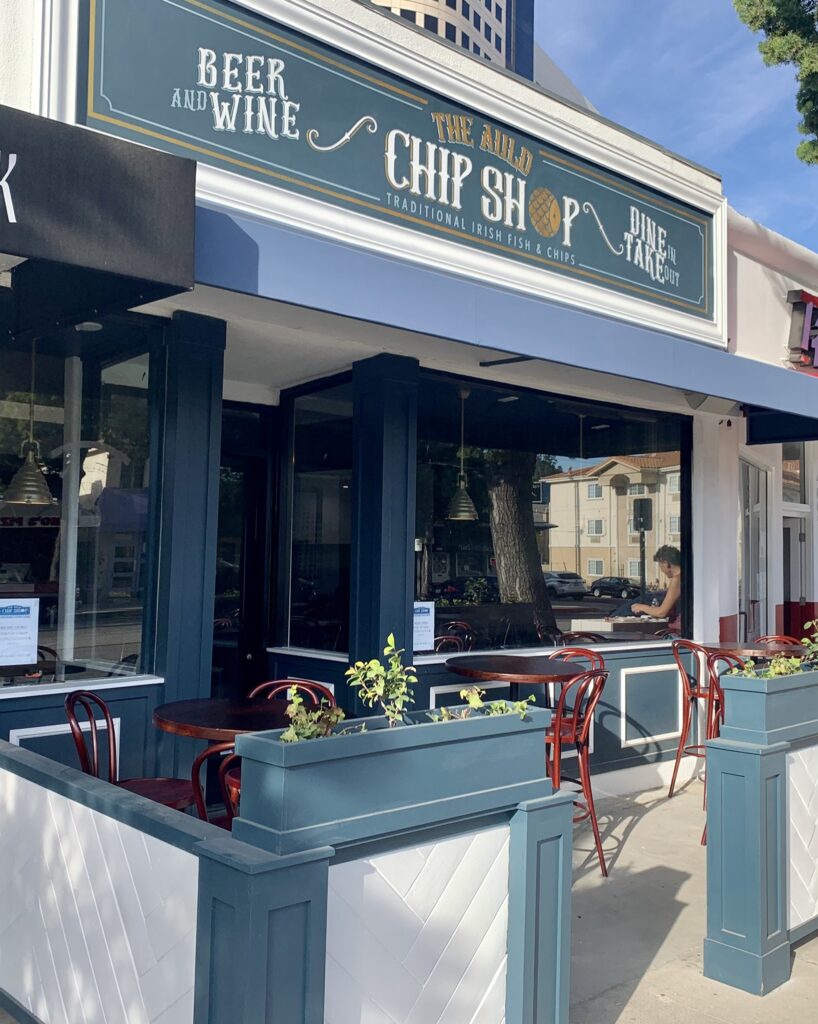 “I’m pretty confident we have the best pint of Guinness in the city. We’re judged on a Guinness, shepherd’s pie, fish and chips, and the breakfast – and the savoury pies. Fresh-baked pies, until sold out, every day.”

Kearns returns to Ireland twice a year as many of his family live in Derry, but travel has been on hold recently because of Covid-19, and his busy schedule with the restaurants.

When he does get free time, Kearns loves to drive his 1966 Mustang up the coast along the Pacific Coast Highway, while the climate allows him to take a daily 5-10 mile walk around Culver City.

“It’s how I keep my head straight,” he says.

Further expansion plans are on hold due to the uncertainty of the pandemic, but Kearns is sure that he doesn’t want to keep working for another 30 years.

“I’d like to retire to the Caribbean; half way between here and Ireland. And of course, spend some time in Ireland. But it’s pedal down at the moment!”