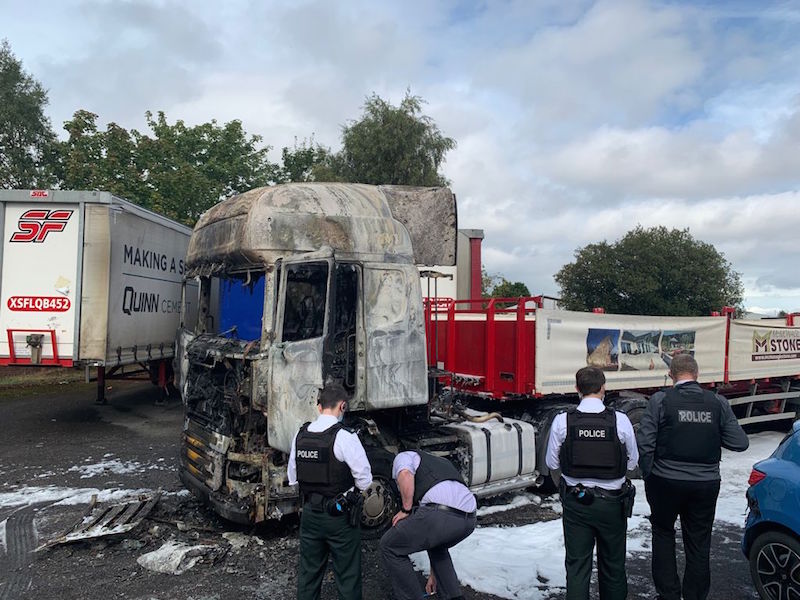 A Donegal lorry driver has suffered a horrific ordeal after he was threatened and his vehicle set alight during an attempted hijacking in North Belfast.

The man, who is an employee of Mountcharles-based company McMonagle Stone, was carrying a load of stone around 1.30pm when the incident happened.

He was parked at the Hillview Road area when a man armed with a gun entered the vehicle and threatened the driver.

The driver then left the vehicle and it is believed the lorry was then set alight.

Officers said the vehicle was completely destroyed following the incident.

The victim was uninjured but has been left shaken.

Police are asking anyone who may have any information about what happened to contact them.

Detective Inspector Dane said: “Shortly before 1.30pm, it was reported that a lorry was parked at the Hillview Road area. An unknown male armed with a suspected firearm entered the vehicle and threatened the driver. The driver then left the vehicle and it is believed the lorry was then set alight. The lorry was completely destroyed following the incident.

“This was a terrifying ordeal for the driver who has been left shaken by the incident but thankfully no injuries were reported. Enquiries are continuing to establish the circumstances surrounding the incident.”

A Northern Ireland Fire and Rescue Service spokesperson said: “Firefighters attended the scene of a lorry on fire on the Hillview Road, Belfast. Firefighters wearing breathing apparatus extinguished the fire.

The PSNI have appealed to anyone who was in the area at the time and saw anything or anyone who may have dashcam footage to contact with detectives on 101, quoting reference 956 09/09/2021.