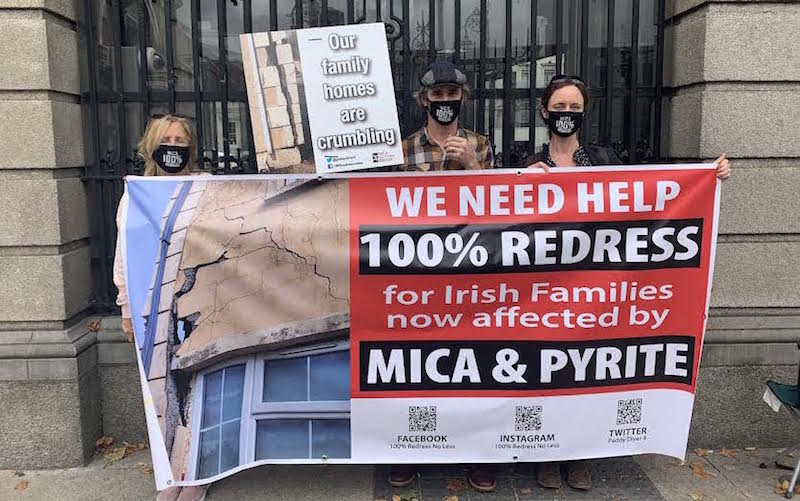 Donegal homeowners to hold MICA protest every day outside Dail

A number of Donegal homeowners are staging a picket outside the Dail every day during September to further highlight the plight of those suffering with mica and to push for 100 per cent redress for those affected by the scandal.

The picket was started last Wednesday by husband and wife, Seamus Devenny and Kate O’Callaghan, who were joined at the gates of Leinster House by Kathleen Bryant.

Carndonagh man Seamus said he was honoured to be among those kickstarting the month-long campaign.

“We want to make sure that they’re aware we are not going anywhere. They must make the redress scheme fit for purpose and avoid a humanitarian crisis that is unfolding not just in Donegal but across Mayo, Sligo, Clare, Limerick and other counties.”

“This picket made sense to me on every level. The direct action that the group took in June shook the politicians and the government genuinely to their core. In order to be sensitive to the ongoing talks that are being held at the moment, I understood that the time was not right for a full-scale demonstration like the one in June. But direct action is the way forward, direct action is what they take seriously. So this was the perfect fit.”

Seamus said the September picket is fundamentally about awareness and keeping the mica issue front and centre.

“People don’t know the truth. It’s our job to make sure that not only do people learn the truth from affected homeowners standing in front of the Dail telling it like it is. But to make sure that the politicians know, not only are we not going away, but we are waiting for the moment when we come en-masse again to Dublin.”

“Standing on the picket outside the Dail is a reminder that we need them to focus on our problem, to focus on our situation because it is greater than any of them are giving it credit for. They are still not taking it seriously enough. The direction we are going in at the moment does not take into account the severity of this disaster.”

‘We will not stop’

Seamus stood with Kate and Kathleen for six hours outside the Dail last Wednesday and described ‘Day One’ as a “roaring success”.

“The feedback was generally fantastic. When people realise the true extent of the situation their jaws drop. Nobody really knows what’s going on up here. They see 90-10, they hear the word ‘mica’ but they can’t comprehend the extent of the problem as it stands today.”

Seamus first started noticing cracks on his house around ten years ago.

“Some days you can’t breathe properly. It’s hard to accept the fact that we’ve wasted twenty years paying a mortgage on a house that cannot be rebuilt with the current scheme and is uninsurable and utterly worthless.”

He says protests “will not stop” until the government commits to 100 per cent mica redress.

“Thousands of families are suffering because of the government and the local material suppliers.”

However Seamus says affected families should also be compensated for the years of torment.

“True justice would be for families to be compensated for the hardship, emotional, economic and physical of this fiasco.”

Meanwhile Malin Head’s Ali Farren was on the picket for six hours last Friday with Kevin Farren and Majella Gallagher Orr for Day Three of the campaign.

The trio engaged with a number of politicians about the mica issue, including former Minister Shane Ross, Aontu leader Peadar Toibin and Sinn Fein Housing Spokesperson Eoin O’Broin TD, who brought them all a hot cup of tea!