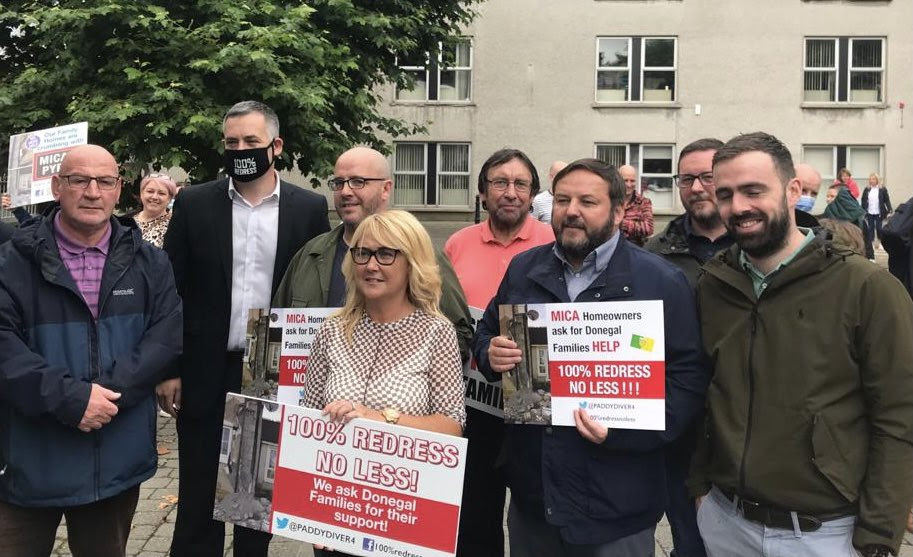 Mica: ‘What families are being put through is unacceptable’

Sinn Féin MEP Chris MacManus has called for “urgent action from government instead of lip service” on the Mica crisis.

MacManus’ comments came after the MICA redress demonstration in Lifford on Saturday.

The Midlands Northwest MEP attended the demonstration in Lifford with many Sinn Féin party colleagues including Padraig MacLochlainn TD and Pearse Doherty TD who have both campaigned alongside affected families in Donegal for many years.

Speaking from Lifford, MacManus said: “What these families in Donegal are being put through is unacceptable. I have visited homes throughout the Midlands Northwest that have been devastated by the MICA/Pyrite scandal. It was shocking and heart-breaking to see at first-hand the devastating impact defective blocks have had on these family homes.

“The damage is enormous and extremely distressing for the homeowners affected, many of whom will be forced to demolish their homes. Many spoke of the constant stress it brings and the huge impact it has had on their mental well-being.

“These families deserve huge praise for continuing to campaign through the years for adequate redress while carrying this burden.”

MacManus called for 100% redress for all affected homeowners.

“I recently raised the inadequate redress scheme for affected homeowners with the European Commission and we in Sinn Féin will continue to force the government to fully back those affected. The situation as it stands is completely unreasonable.

“The current Concrete Blocks Grant Scheme for those affected is inadequate as it only covers up to 90% of the remediation costs. In many instances, affected homeowners are being straddled with up to 50% of the remediation costs. This is completely unacceptable and leaves homeowners who have done nothing wrong with bills of tens of thousands of euros which they cannot afford to repay.

“Sinn Féin fully support the demands for a fully funded, 100% redress scheme for all homeowners affected by defective blocks in Mayo, Donegal, Sligo and Clare. It is the only fair solution to this issue.”

MacManus concluded by pledging his party’s ongoing commitment to the affected homeowners. “We will stand by these homeowners at every step until they find justice. Sinn Féin will continue to pursue this issue at Dáil and EU level until an adequate redress scheme is put in place. There can be no excuses.”

Mica: ‘What families are being put through is unacceptable’ was last modified: September 13th, 2021 by Staff Writer
Facebook0Tweet0LinkedIn0Print0