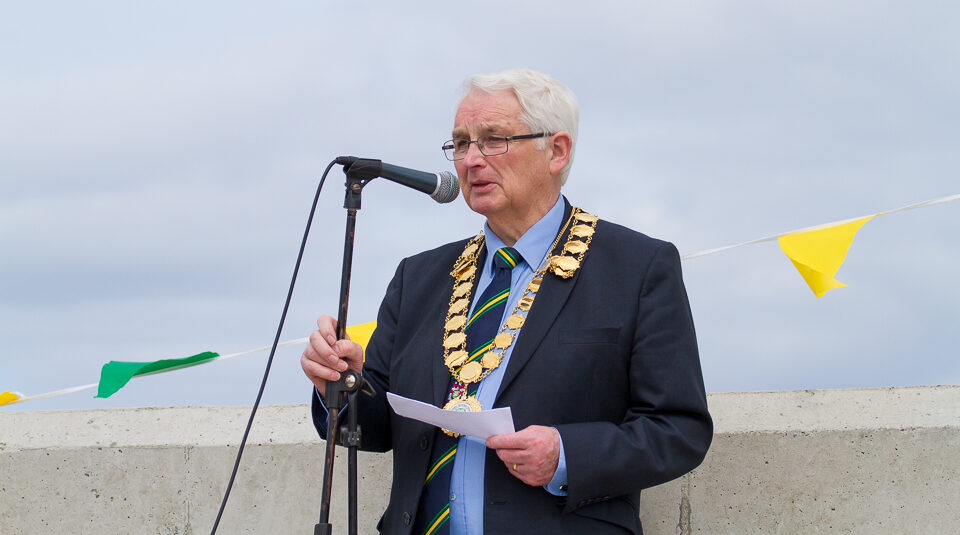 Today’s meeting of the Inishowen Municipal District was adjourned as a mark of respect to Cllr Bernard McGuinness.

Cllr Nicholas Crossan said it was fitting that the Culdaff man had died as First Citizen of Inishowen.

“It was such an untimely death but If there’s ever a way to go out, to go out as First Citizen of Inishowen was it for Bernard.”

“Like the rest of the councillors here, I am deeply saddened. I just can’t get it into my head that my first function is to pay tribute to Bernard McGuinness.”

Cllr Crossan described the late Cllr McGuinness as a “true blue Fine Gael man” as well as a one-off, with an unparalleled record of service in local government.

“He worked most of his adult life as a councillor and the work rate that he had in Inishowen, I don’t know if it’ll ever be equalled. It’ll certainly never be beaten. He was so dedicated.”

Cllr Martin Farren said it had been a “great honour” to serve along with
Cllr McGuinness on the council for the past dozen years.

He added “I know Bernard wasn’t in great health for a number of years. But by God, he was a fighter. He certainly didn’t lie down to anything. He fought his corner very well.”

Cllr Rena Donaghey spoke of Cllr McGuinness “exemplary commitment” to his community and his political party.

“He certainly fought his corner. He was a very astute, well-seasoned politician and we’re going to miss him. He had a lot of experience and he knew exactly what Donegal needed and what was right for Donegal.”

“No one thought that when we finished up in July that we’d be back here today and Bernard would have passed away. He’ll certainly be missed at Inishowen level, at county level but also in his own locality.”

Donegal Mayor Cllr Jack Murray described Cllr McGuinness as a “giant of politics”, as someone who everyone in Inishowen knew and respected.

Cllr Martin McDermott said his death was a “sad day for us all”.