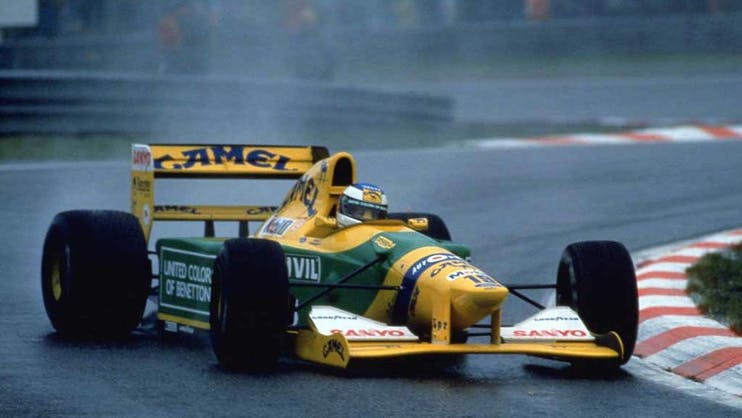 Nannini won just the one FI Grand Prix in his racing career, the one in which Senna and Prost locked horns on in Japan with both crashing into each other in the same corner.

Prost retired but Senna got going and went on to win the race but was excluded handing that race to Nannini in his beautiful Benneton.

Nannini’s name had a great ring to it especially when the late TV motorsport commentator Murray Walker was behind the microphone -“NANNINI” he would roar as the Italian driver would push his Manardi or Benneton to the limit punching well above his weight.

We had our own Nannini years ago in the fire service in Letterkenny. One or drivers who did an amazing bit of driving on our way to a fire call one evening.

Benneton’s driver drove a V8 to his only F1 victory. Our driver also drove a V8 on that day, both were running on Goodyear Tyres and both modes of transport were very impressive if you seen them at full tilt coming along the road, but that’s where the similarities end. Our weight was over twenty tonnes loaded up and even though its Perkins V8 diesel had a glorious sound to it. It was slow to get it speed up.

It was a fire call to the Castlefinn area we were on, out to back-up our neighbouring Fire Station and our big fire engine and its hoist on the back was needed for aerial firefighting requirements. As we rushed towards Castlefinn the heavens opened between Stranorlar and Killygordan.

Pushing on to the call we rounded a corner and the driver ahead of us, possibly seeing the blue lights flashing behind them and the twin horns blowing, decided to stop to let us pass. This all happened on a long sweeping corner and as our driver tried to reduce speed the backend of our fire engine lost a grip on the wet road and now all twenty tonnes and then some were sliding down the road sideways. 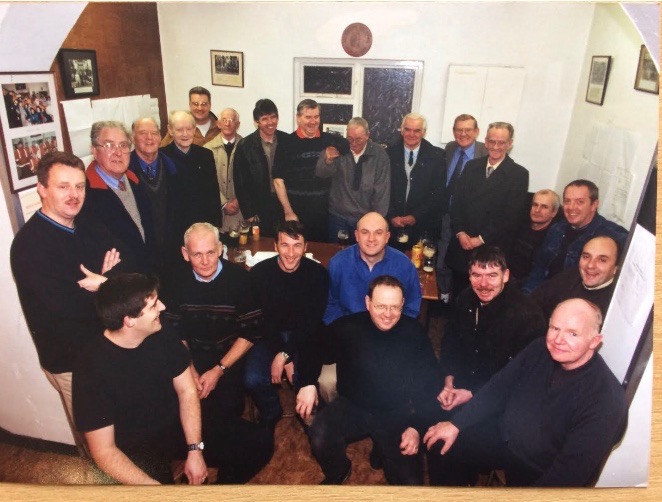 Our Nannini the late Benny Daly on the very right of this old get-together photo of fire fighter a few years ago at the old Station on the High Rd.

It happened quickly losing the grip of the road but the following split seconds seemed to last for the longest time. I was sitting right behind the driver as one of the crew. Already our driver had his foot off the brake and was trying to steer into the slide. The top heavy fire engine started to come out of the slide but its momentum brought the tail end of the fire engine in the opposite direction.

The second slide was more frightening than the first slide and all through this our driver fed the steering from opposite lock to opposite lock, by this stage we managed to pass the car that stopped but now we were hurtling down the wrong side of the road.

On the way home as we passed the spot on the road where we nearly had a major accident we were all very thankful that we got through it in one piece.

Our driver that day was the late Benny Daly and over the next few days as we shared the story of the great bit of driving that Benny did that day in very poor driving conditions somewhere along the line we started to call Benny Daly after the famous Italian racing driver Nannini.

Benny was a very dependable driver for the fire service for the best part of the years that I spent there. Benny drove for the I.A.W.S. years before that and also remember Benny driving a car transporter articulated Ford D Series for the late Andy Hegarty.

They have to be ready as do the vehicles that they drive to drive the pressurised job involved. 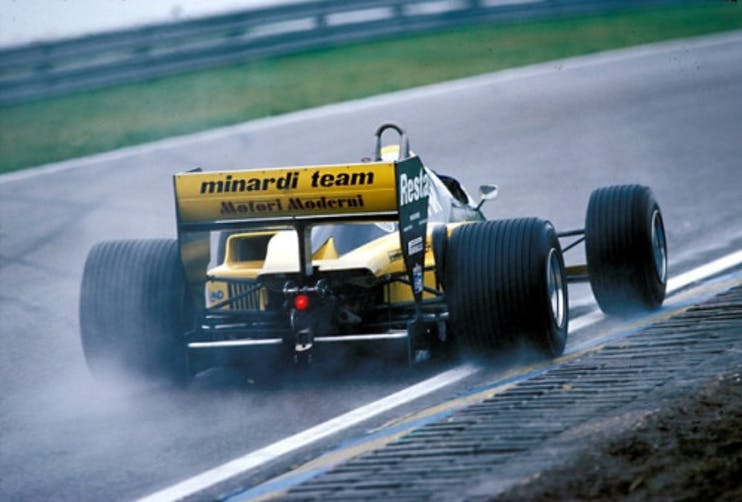 Nannini in the Minardi as his tyres deal with the wet conditions.

Good tyres have a big part to play with your connection with the road both with grip and and having the right tyre pressure at all times. At the end of every fire call our fire engine a Dennis Simon Snorkel would be filled up with fuel and would be topped up with its water supply to go to and fight the next fire.

These thoughts all came back to me recently when I headed off in a trip to Belfast and decided when I was filling up with fuel to just take a wee check at the tyre pressure on the van I was driving, I was shocked to find that every one of the tyres in my van were well under 10 pounds of pressure per square inch (PPSI) or over 1 bar lower than what they should have been in each wheel., the frightening thing I found is, visually you would never know to look at the tyres that they were soft, the tyres themselves were in good condition with plenty of thread left on them to pass with ease the legal tyre requirements. Not doing much miles over the last year or so vehicles parked up for long periods of time, especially in the recent lockdowns can lose a bit of the tyre pressure a lot easier than if they were driven every day.

Low tyre pressure even in a good tyre can have a massive effect on the performance of a tyre especially as roads conditions get worse coming into the winter months.you might not notice this driving about on short runs, but the day that you faced with a driving situation that you have to stop quickly or serve to avoid something on the road, badly inflated tyres will make the difference in you getting stopped or not.

Our unsung hero that day Benny Daly was our Nannini when he steered us out of danger, I remember he always would start his sentence with the word ‘listen” when he would be giving you a bit of advice, or share some of his experience from behind the wheel on the road. On the day of his heroic bit of driving his words of advice were, “listen boys we had good tyres and good brakes and a bit of luck to steer us through. After that, we’re in the hands of the gods.”