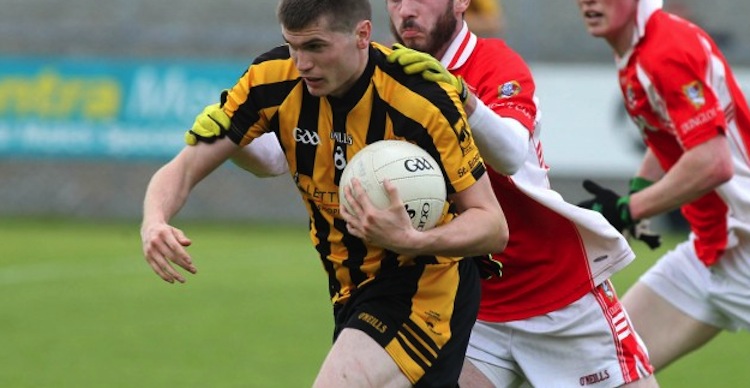 A PAIR of goals in the depths of added time gave the scoreline a deceptive look as St Eunan’s overcame Termon in a feisty SFC tie at The Burn Road.

Eoin McGeehin and substitute Darragh Mulgrew (pictured) netted the late goals for Rory Kavanagh’s team, who were pushed all the way by a determined Termon.

There were only three points between them – St Eunan’s ahead 0-10 to 0-7 – when Termon were a lick of paint away from a goal in the 58th minute.

Daire McDaid had a sight of the bullseye, but his effort cannoned off the underside of the St Eunan’s crossbar. Shane Doherty tried to pick the pieces up, but St Eunan’s survived.

St Eunan’s kept Niall O’Donnell in reserve but, with the game firmly up for grabs, the Donegal player was summonsed.

O’Donnell tacked on a point and it was he who made the play for the opening goal.

Ryan McFadden’s free had just brought Termon within three again and the glimmer of hope remained for Francie Friel’s side.

However, O’Donnell fetched superbly and drove forward. Via his brother Shane, who was also introduced at a key time in the second half, and Eoin Dowling, the ball was worked to McGeehin, who made no mistake with a low finish.

Even a six-point deficit didn’t feel a fair reflection but there was still time for Mulgrew to finish after O’Donnell played the ball across.

Termon claimed for a square ball, but Mulgrew’s first touch proved the game’s final play and the green flag went up to give St Eunan’s a win they’ll know they earned.

Both teams came into this one off the back of opening day defeats. St Eunan’s, under the management of 2012 All-Ireland winner Rory Kavanagh, were six points in front of Kilcar at one stage, but ended up on the losing end.

On their travels last weekend, Termon lost at St Naul’s, but the hosts began with purpose.

McDaid arched over to put Termon in front after only 17 seconds and the home support were roused again when McDaid tucked a 45-metre free between the sticks.

Conor O’Donnell junior, from a pair of frees, had St Eunan’s level and Eoin McGeehan had the black and amber 0-3 to 0-2 ahead at the water break.

O’Donnell converted another free to stretch the lead, but Termon were level by the half-time whistle.

Anthony Grant landed the home side’s first point in 17 minutes with a splendid effort from distance.

Donegal under-21 player Ryan McFadden brought Termon onto an even keel, sailing over a superb free from the left-hand side of the ’45.

St Eunan’s were 0-8 to 0-6 ahead at the second water break, but a brilliant McDaid free from the right narrowed the deficit.

St Eunan’s, assumed some control of the contest with Conor O’Donnell senior and McGeehin, from a mark, registering.

Caolan Ward was black carded with the temperature on an already boiling pot began to rise further as the finish line came into sight.