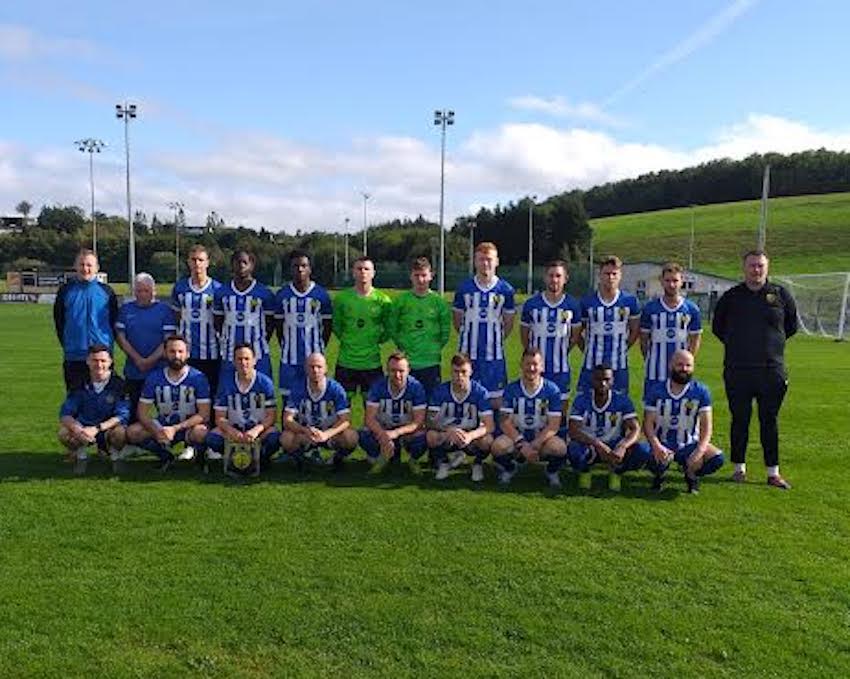 Simon Douglas and Mark Mulligan netted the goals to give Monaghan a historic victory – their first in USL League competition.

The home side started the brighter and had applied some decent pressure without creating any particularly noteworthy chances. A free kick on 6 minutes was confidently fisted clear by the Letterkenny keeper Chris O’Donnell.

Soon after good work by the lively Sarto Quigley down the wing set up James Turley but the home midfielder shot wide from a good position. Soon after this the combative Turley was given a warning by the referee after committing a foul.

By this stage the away team had worked their way in to the game and Shane McNamee went on a dazzling run in to the Monaghan box beating three home defenders but lost control at the vital moment and a goal kick ensued.

Shortly after this the Letterkenny striker Gary Merritt ran on to a long ball over the top of the home defence but with the home goalkeeper advancing out of his box, Merritt’s hook over Mark Byrne went wide. This was a big let off for the home defence. As Letterkenny took a firm grip of the game Kevin McGrath had a goal disallowed for offside.

However the home team broke away down the right and as the low ball in to the box was fumbled by O’Donnell, he managed to grab it at the second opportunity as the home strikers moved in.

As the Mons again tipped the balance of play in their favour, Victor Ihemse drew the away goalkeeper off his line and calmly played in the onrushing Mark Mulligan who somehow managed to hit the base of the post from three yards out.

Right from the start of the second half, both the pace of the game as well as the intensity rose up a few notches. A short corner saw Mulligan cleverly evade the home defence but his shot from a narrow angle was parried to safety by the Donegal team’s keeper.

In the 57th minute the home team made the breakthrough. A corner from the left was met on the edge of the box by the home centre half Dylan Ballantine and his firm header was met by the diving head of Simon Douglas who buried it low in to the net from three yards.

It was probably fitting that Monaghan United’s first goal in Gortakeegan in the USL was scored by the Clones man as he was a very effective player for the Mons a number of years ago in the League Of Ireland.

Home celebrations had barely died down when an immediate Letterkenny attack from the kick off resulted in a free in barely a yard outside the box with the Donegal men screaming for a penalty.

However, the goal had given the home team a visible confidence boost and a superb Enda Hessin low ball across the goal went unconverted as the home strikers failed to arrive in time.

Quigley put through Ihemse on a one on one with the keeper but his shot did not trouble O‘Donnell. The away team again claimed a penalty after a tussle involving Monaghan centre half Jamie McCarey but a free out was given. Shortly after a timely last ditch tow poke by Ballantine just as a certain Letterkenny goal seems on, kept the home teams lead.

With just three minutes left of normal time the home team eased the stress levels of the home fans. After good play in the final third of the pitch the ball fell to Mark Mulligan on the edge of the box.

The home striker looked up and sent a precisely placed bullet to the roof of the net more than making up for his first half miss. Cue wild celebrations in the home camp.