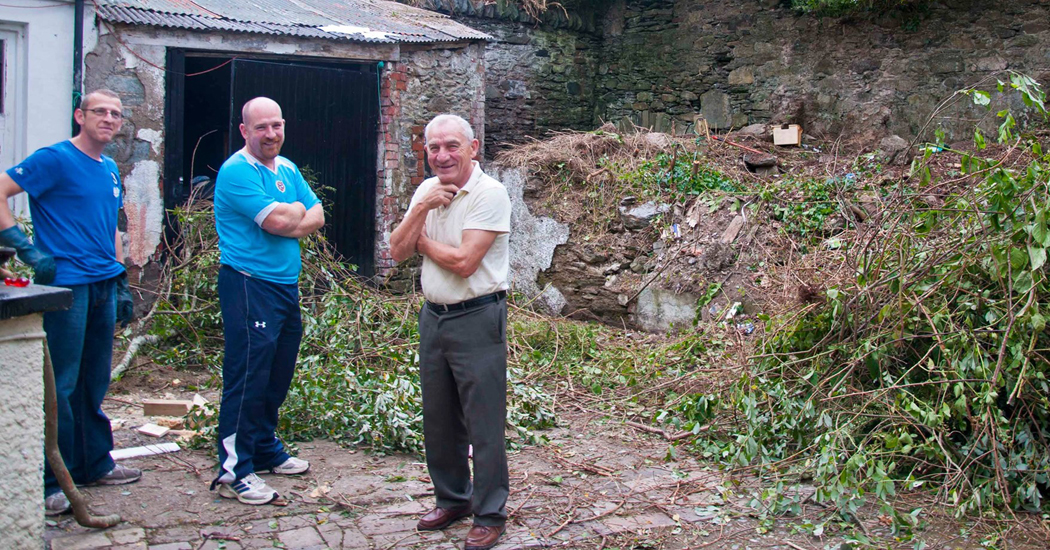 Mr Harvey, formerly of Church Lane and Thorndale Letterkenny, died at the age of 78.

He and his family have played a pivotal role in revitalizing Letterkenny’s Cathedral Quarter.

His son Donnan shared the sad news of his passing today.

In a touching tribute, Donnan describes his father as the man responsible for saving the historic Church Lane and helping to chart it on a brighter future:

“Joe was born on May 2nd 1943 along with his twin brother James to Rose and John Harvey. The Harvey family lived on College Farm before moving to Church Lane in the mid-1950s.

“Like many of his generation, he moved to England after his Leaving Certificate settling in Birmingham with his twin brother James. In 1970, he returned to Letterkenny taking up a position with Donegal County Council. He met Margaret McDaid from Ramelton and they married in October 1971. The couple had six children Nicola, Kelvin, Tamara, Donnan, Odhran, and Caolan. Joe moved jobs and was well known in Inishowen and East Donegal in his role as a Community Welfare and further afield for his Trade Union activity.

“But his lasting legacy is that in his family home of Church Lane. For several decades, Joe maintained his property No. 3 Church Lane with quiet dignity and a deep sense of pride at a time when very few cared about the plight of the historic street. And it was Joe who at the end of 2013 that light the fuse for the Cathedral Quarter project when challenging town council officials in the local media about their failure to address the problem of dereliction.

“Joe was the last surviving member of the Harvey family as the eldest, Philomena Mannion died in England earlier this year. He is predeceased by his parents Rose and John, siblings Philomena, Sean, Michael, James, Jerry, and stillborn twins. We send our deepest sympathies to Joe’s wife Margaret, their six children, and their partners. their grandchildren Daithi, Ultan, Oisin, Tiernan, Lorcan, Rosin, Diarmuid, Dualtach, Laoise, Cathair, Aidan and Aratson. Also, our condolences are extended to the wider Harvey family in Letterkenny, Derry, and England and to the McDaid family in Ramelton.

“It is our promise to Joe and all those who lived on the Church Lane but have sadly passed on that the derelict houses on the street will be restored to their former glory.

Funeral details are to be confirmed at a later date.