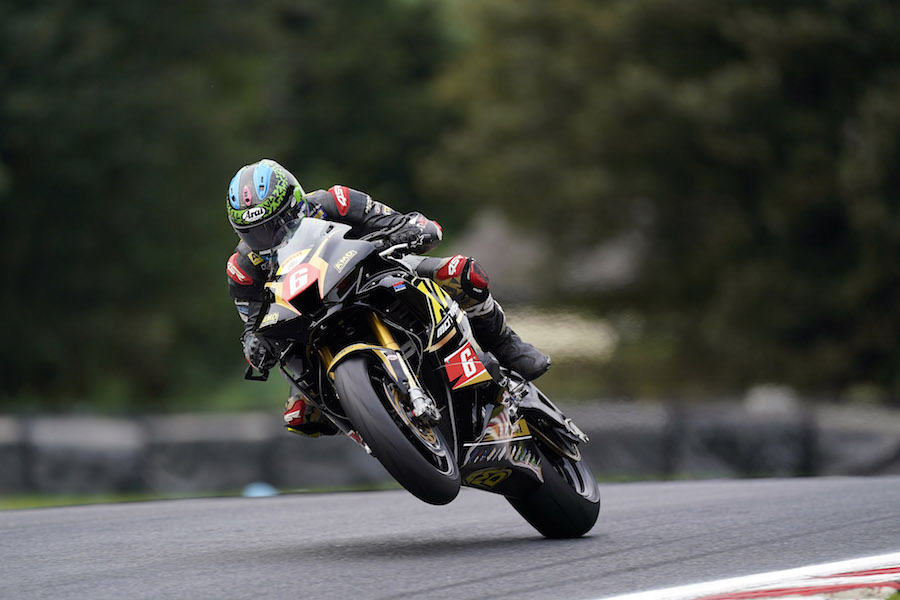 Another top 12 finish for Kerr

Donegal man Richard Kerr and the Dumfries-based AMD Motorsport team were back in Pirelli National Superstock Championship action at the weekend.

Although the meeting at Oulton Park had a few ups and downs, the 21-year old put in a strong ride on Sunday to take a deserved 12th place.

The Kilmacrennan, County Donegal rider had a solid first day at the Cheshire venue but an early spill in Saturday morning’s qualifying session at the Shell hairpin put him on the back foot.

With the time lost, it looked like it was going to be a damage limitation exercise but a late lap saw Richard post the 16th fastest time which put him on the sixth row for the afternoon’s 14-lap race.

However, his race was over before it had only just got underway as he dropped back to 23rd on the opening lap with gear selection issues. He pulled in to the pits a lap later to make some adjustments to the factory-prepared Honda Fireblade and rejoined the race two laps later to ensure he’d set a lap time for Sunday’s race. That’s exactly what he did for another sixth row start.

With good conditions all around the 2.69-mile circuit once more, Sunday saw Richard place an excellent fifth in morning warm-up after posting his fastest lap of the weekend and that put him in confident mood ahead of the race which was this time held over the shorter distance of 12 laps.

A good start saw him complete the opening lap in 14th place and from there on in, he was involved in a group of riders battling it out for tenth place. Positions changed regularly particularly towards the end of the race between Richard and the Astro-JJR BMW pairing of Shane Richardson and David Allingham but he got the better of both of them to secure a strong 12th place at the chequered flag.

Richard Kerr: “It was a bit of an up and down weekend to be honest with the highside in qualifying having an effect on Saturday’s race. An issue with the quickshifter put me out of the race but it was important to get a good lap time in for Sunday so the team did a great job in getting me back out on track and my pace was pretty strong and consistent.”

“We were having a few issues moving from first to second gear but we made further changes for Sunday’s race and the bike was the best it had been all weekend. I was involved with a good battle with a good few riders and had it not been for making a wee mistake and going onto the grass, it could have been tenth. Overall though, I’m happy enough with the finish and especially with my lap times so it’s good to end the weekend on a high.”

Fraser Dykes, Team Owner: “It’s been a weekend of two halves but it was good to end with a positive result and the least the team deserved for all their hard work. The quickshifter problem affected Richard considerably but he used his head in the first race to get a good lap time in for the second race whilst we were extremely grateful for the assistance of the Honda team and especially Mark Kelly. It’s testament to both Richard and the team that they were able to turn the weekend around and their heads never dropped. The work ethic and attitude was spot on and we’ll look to get back into the top ten at Donington next time out.”

The next round takes place in a week’s time at Donington Park on October 1-3.