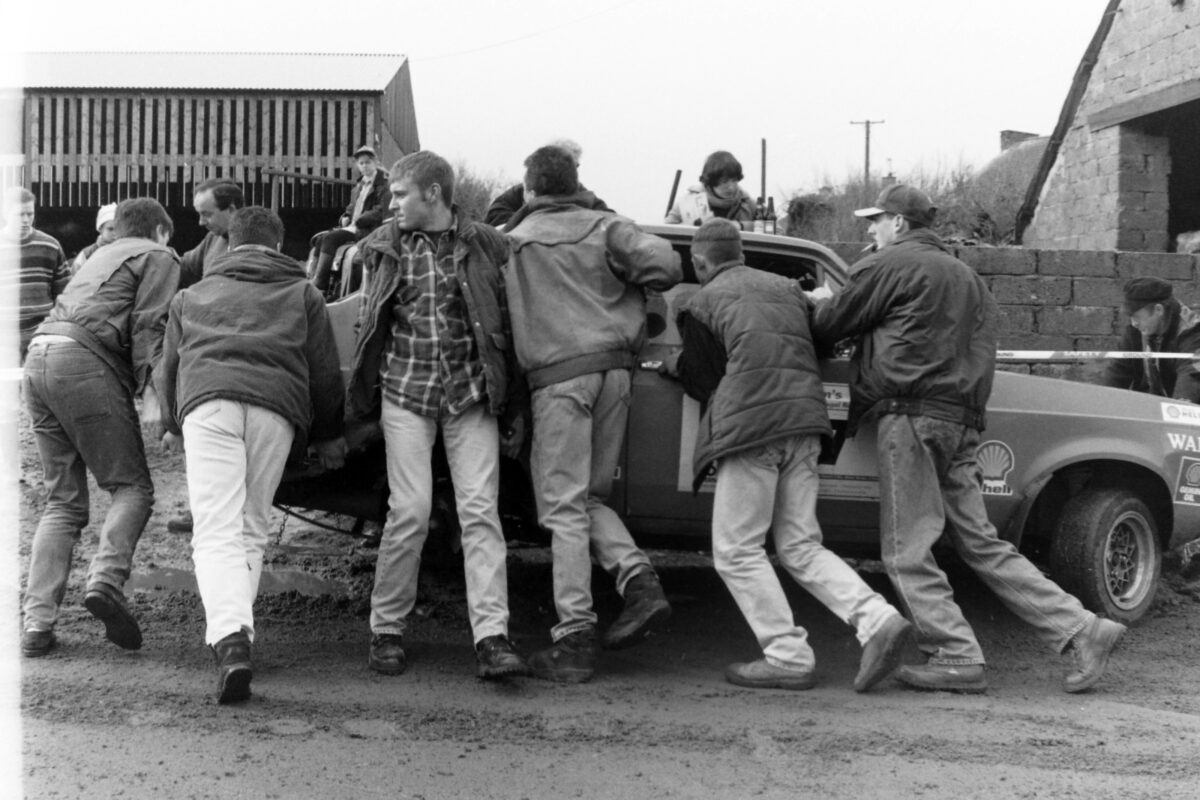 Rally Ireland which was part of the world rally championship touched down in Donegal town a decade or so ago.

The crowds were big but there is a good chance the interest will match this week’s Abbey Hotel sponsored Donegal Harvest Rally ,  that is only a slight exaggeration!

You can hear it in Eamon Mc Cafferty’s voice this week when we caught up with him. 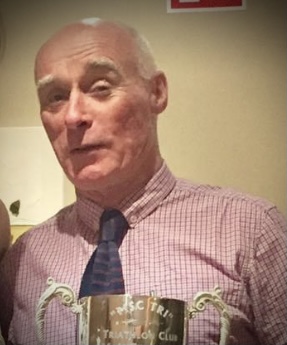 Clerk of the Course for the 2021 Abbey Hotel Harvest Rally Eamon McCafferty.

“Can I ring you back in a minute Brian? I’m in a shop here.” He’s the man in the hot seat this weekend burning the midnight oil to four in the morning putting the final touches to a very full entry and a reserve list for what with be the first rally in Co Donegal for 20 months and the only rally on the Donegal Motors Club calendar for 2021.

They were just putting the final touches to the entry list on Tuesday Afternoon, all 147 competitors. And a dozen or so on the reserve. It’s nearly 10 years since Eamon McCafferty was the Clerk of the course for the Harvest when it was last  based in and around Donegal Town.

Chatting this week to Eamon he was full of praise for the public and all involved in making this event happen.

“There’s a real buzz over here as everyone is trying to get back to some sort of normal and finally get out to compete or spectate over this coming  weekend. We have put in a lot of extra work in the planning of this event to comply with Covid restrictions. 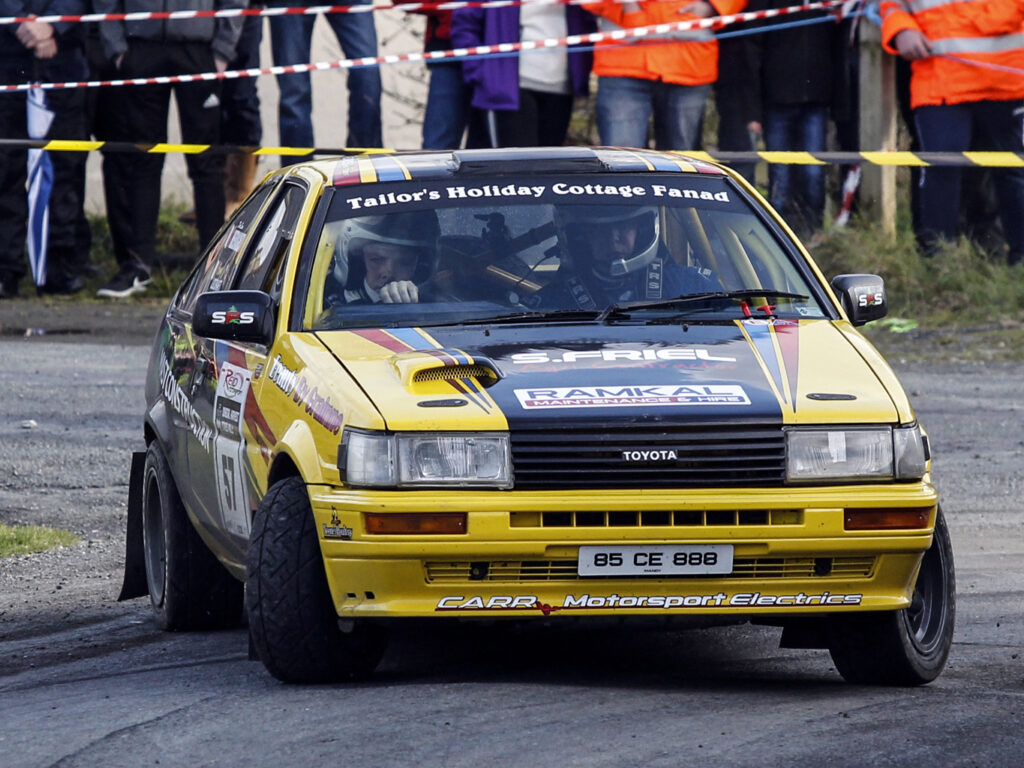 “The stages on Saturday evening and on Sunday have being planned on stages designed with few junctions so crowds spectating would be spread out. The other restriction is not to have spectators allowed into the service area. We also have appointed Covid officers to monitor this on the day”

The last winner of the harvest Callum Devine is seeded first on the road in his Fiesta leading a entry that would not look out of place on the Donegal International Rally with Local Frosses man Donagh Kelly at 2 in his Polo, Josh Moffett is at 3 his brother Sam is at 5 Desi Henry is at 4, Gary Jennings is at 6 Cathal McCourt is at 7 Donegal’s Declan Boyle is at 8 , Inishowen’s Joseph Mc Gonagle is at 9 and Naul Maguire is at 10. 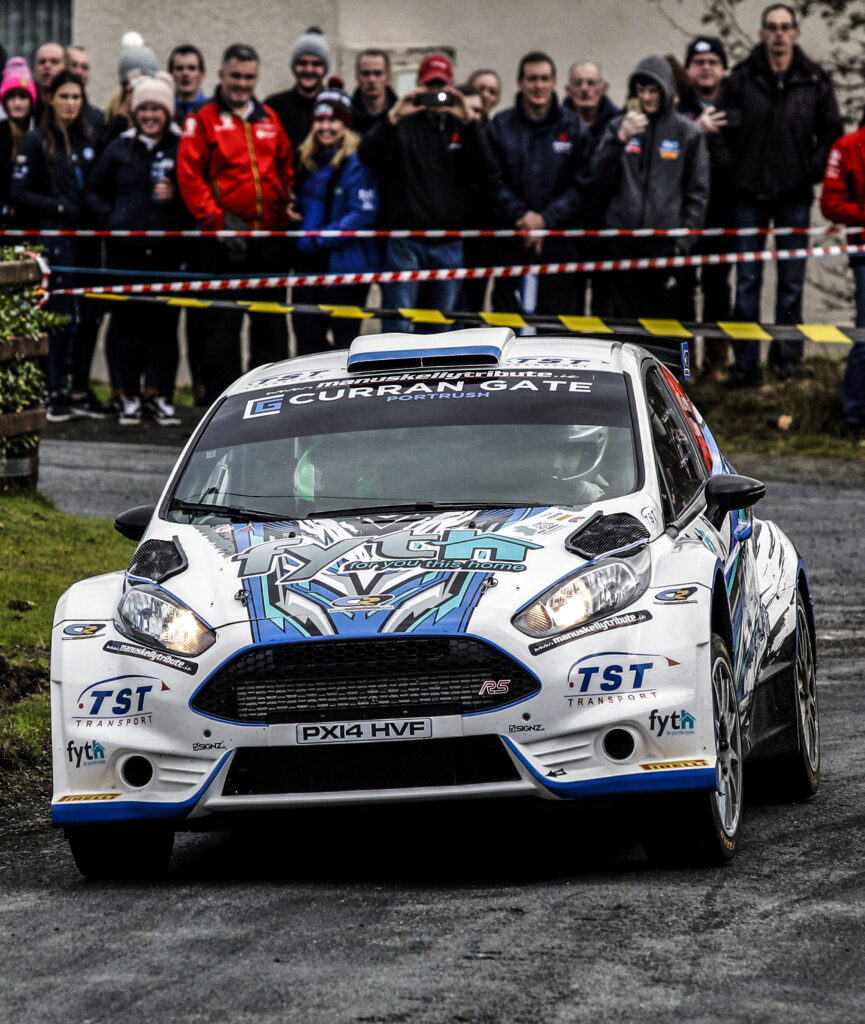 Calum Devine winner of the last Harvest Rally in 2019 1st on the road in this weekend event based around Donegal Town. Photo Brian McDaid.

The Modified has all the big hitters in there too with big interest in the return of Daniel McKenna mixing it with the likes of Kevin Eves, Adrian Herrington and Declan McGee to name but a few.

The Donegal harvest and Donegal Hills have a very special place on the motorsport calendar both are in the same place in my memory of years gone by and only a door plate number in a picture with the harvest or hills on it tell me which is which I have included a few old black and white  photos from around 30 years or more ago from these events looking at how cars a hairstyles have changed over the years, a few frames of a young Adrian Caddye and his older brother Donal. 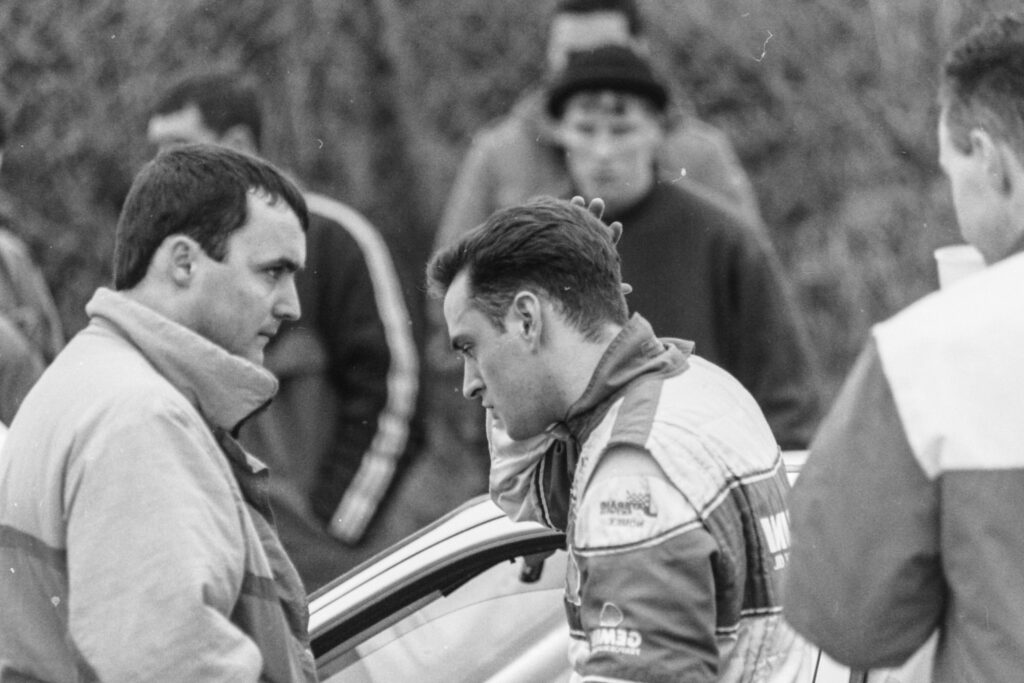 On the notes as they came bombing into a junction extracting all the power their wee Toyota Starlet could put out, Ken and James Mc Clintock in their mini which was a familiar sight on events, two competitors catching up with each other at a junction on passing the other to the roar or the crowd. Then we have a crowd lifting a car back onto The road after an off. One of the best turned out cars of that era was that of George Robinson Rear wheel drive Starlet pictured tiptoeing through a slippery farmyard  with what looks like the very familiar face of Kenny Mc Kinstry , right through to an image of  very fresh faces of local businessmen Brendan  Kelly and Stephen Harris.

The best memory from them old black and white days was a picture of my best friend Gerry Doran with Pat McDaid servicing for Adrian Caddye. 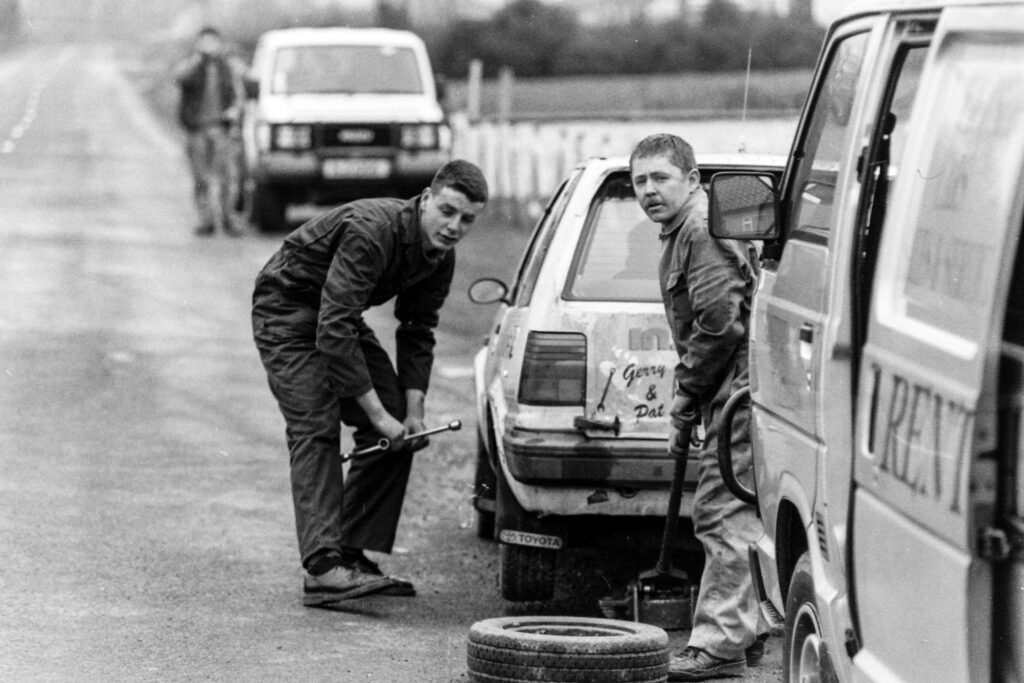 The picture reminds me of a night in Jackson Hotel.  a group of five of us who all work in Caddye’s garage in the church lane or Church St Car sales as it was known. We’re looking for a late drink at the rally headquarters Jacksons hotel. Me and Gerry went up to the night Porter to try and order a drink. We were told that drink was only being served to residents only. To which a quick thinking Gerry replied, Sure we are residents, I’m  very sorry was the quick reply as the night Porter took our order for the drink, what’s the name he then ask, Gerry proudly  replied ‘we are the McVicker Brothers’ ( the name of the top competitor at the rally that weekend), the night porter landed back kinda scratching his head.

“There don’t seem to be any Mc Vicker Brothers booked in her tonight,” and as a flash Gerry replied, This is Kees’  Hotel isn’t it?!  The night porter gave in to Gerry’s humour and gave us that late drink with friends Danny and Anne Caddye and Mick Henry all sadly gone far too young. 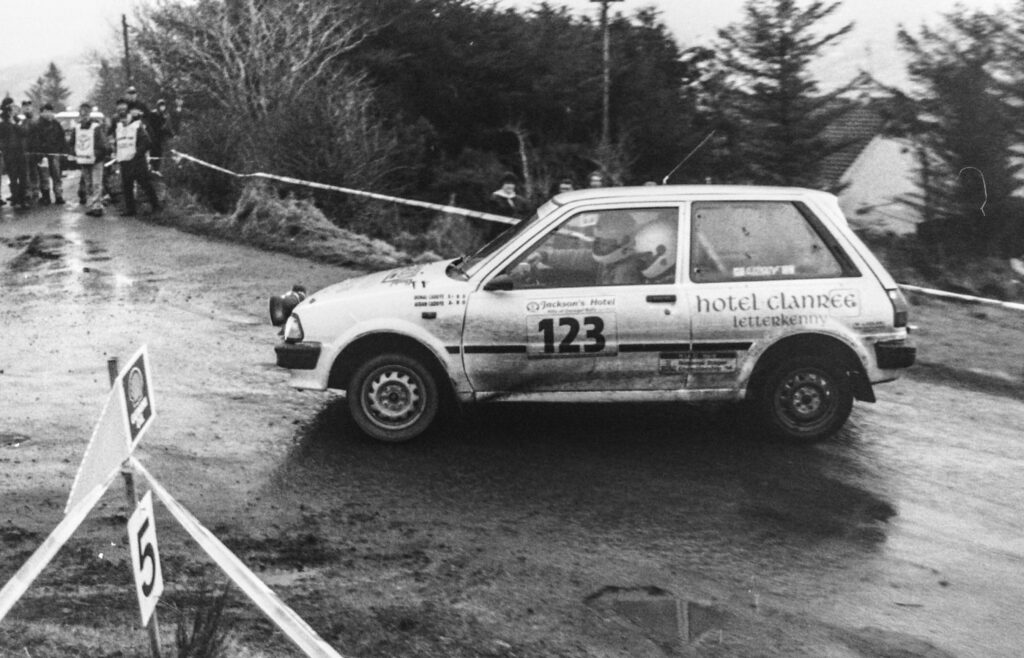 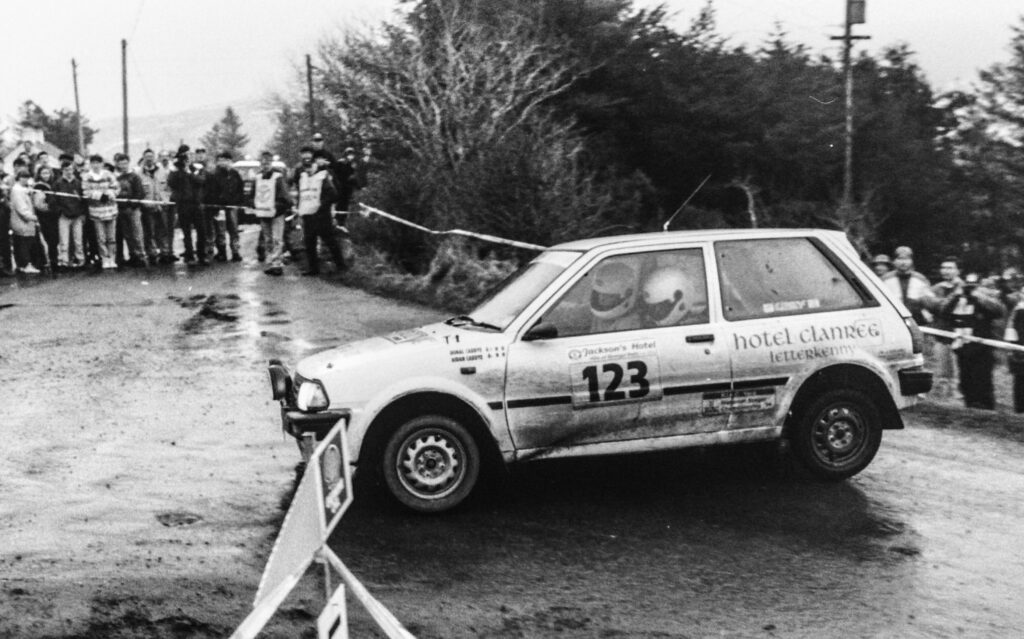 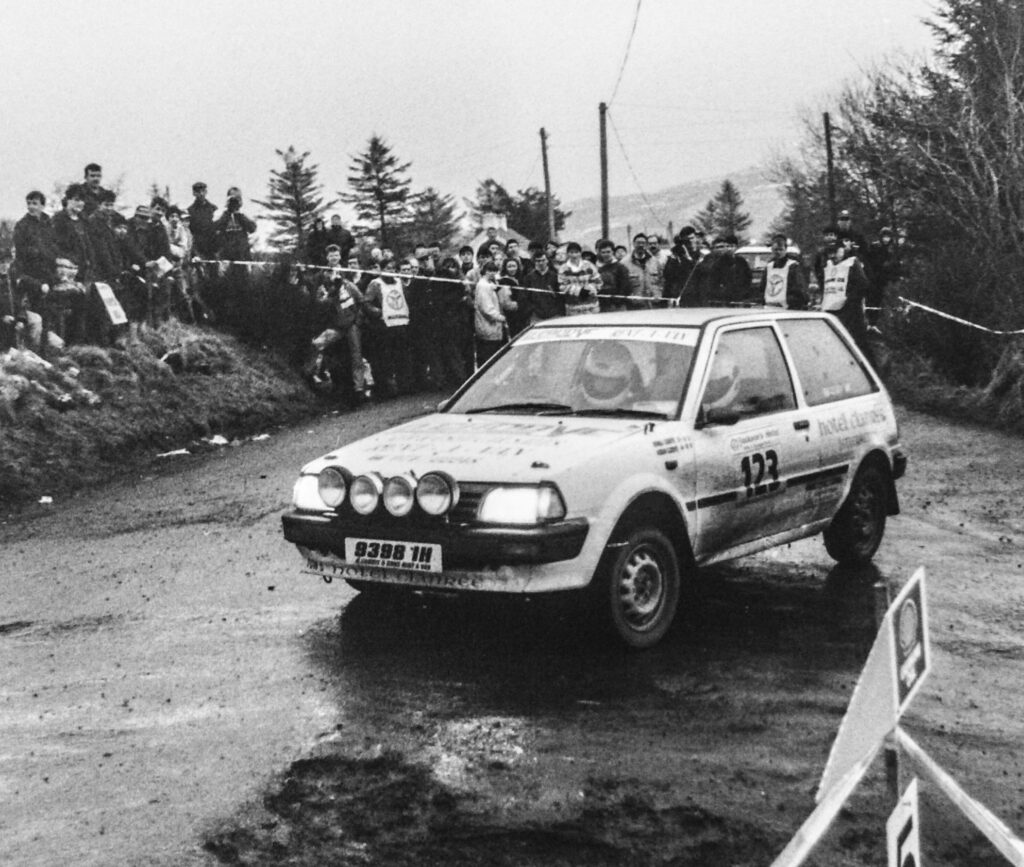 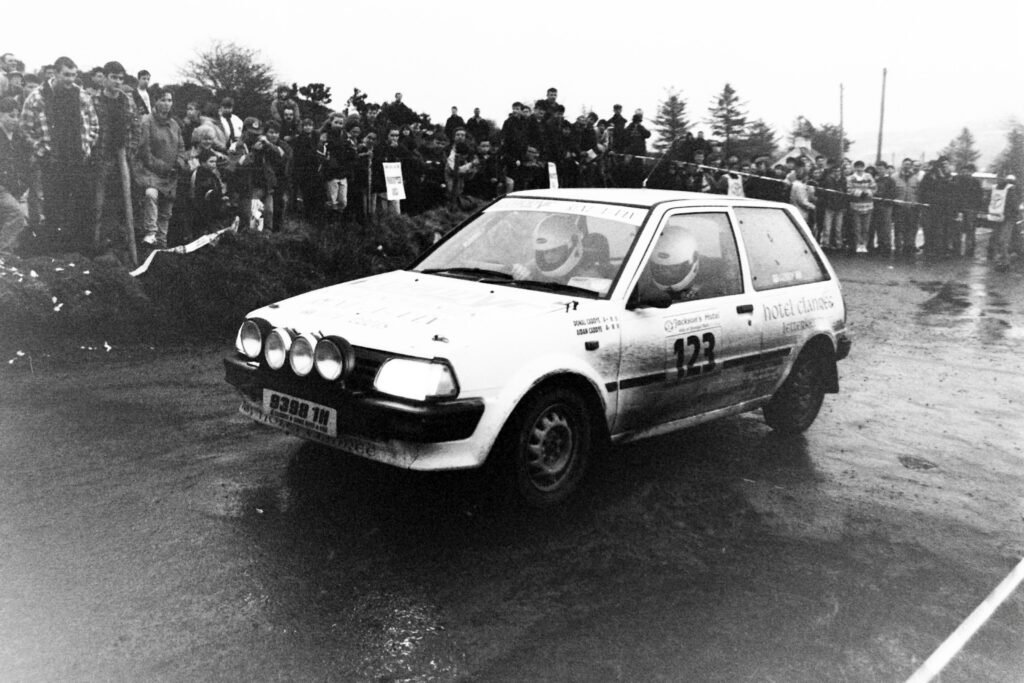 As the time clocks light up at the start of the stages this weekend many will think of rally folk that are no longer with us who passed away in lockdown.

In my mind two come to mind that I got to know over the years one a competitor in his white PZP Mk 2 Escort  Dick Hanlon and from the organising side Danny Gormley. 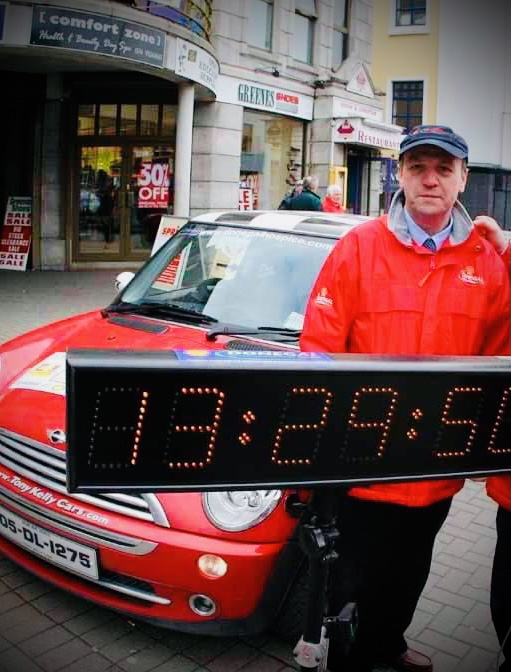 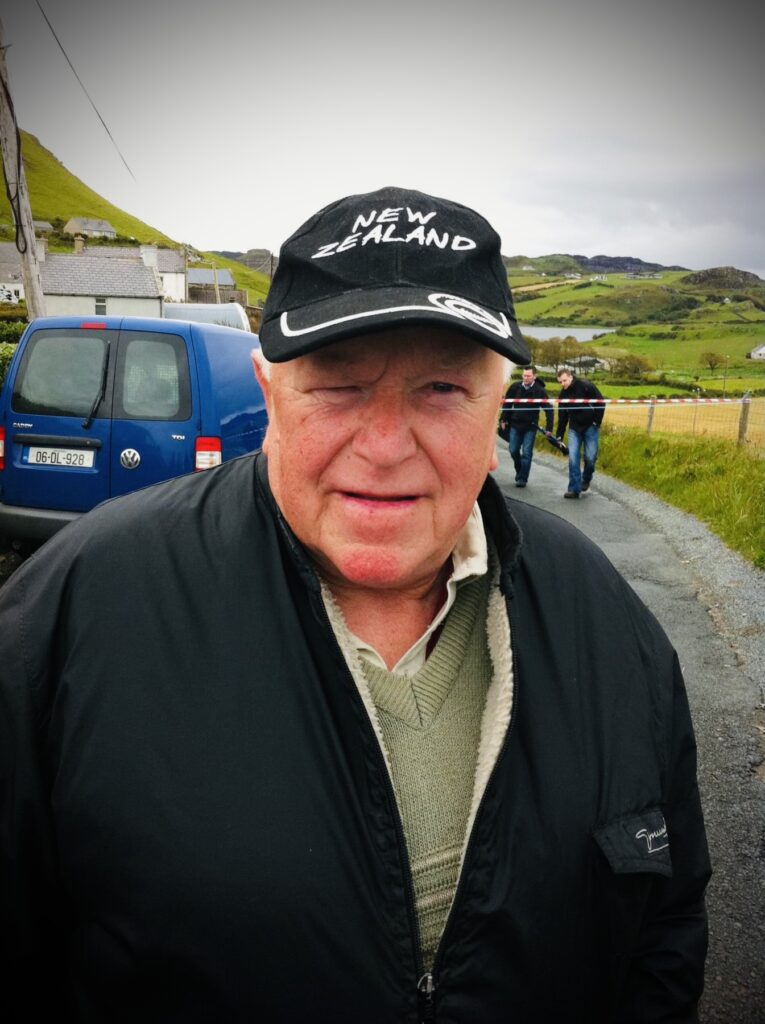 It would be hard to get everyone together to do a minute of silence but the roar of a rally car back in the hills this weekend will remind us of all the friends we have lost since the lockdown began.