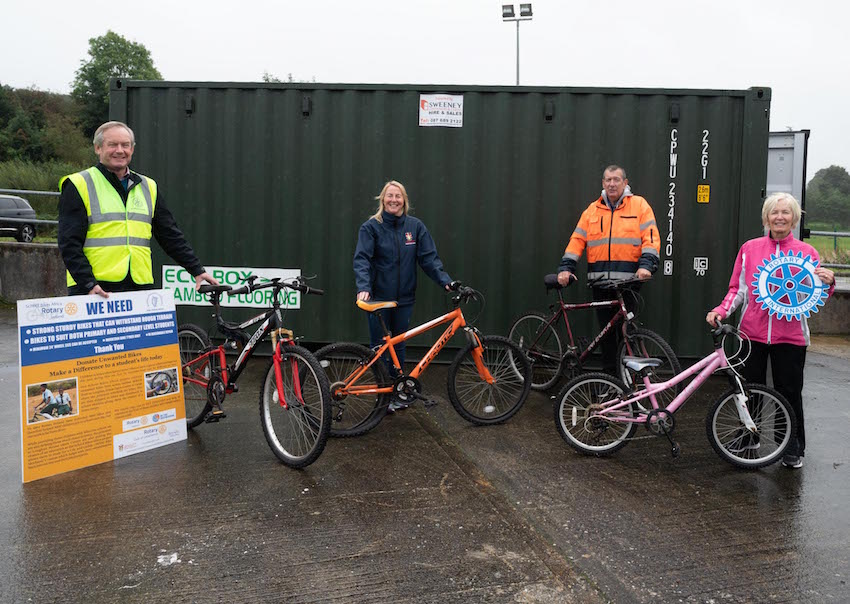 Get on your bike for Letterkenny Rotary Club

Once again, Letterkenny Rotary Club has announced the opening of their annual School Bikes Africa Appeal in conjunction with Donegal County Council and Bryson Recycling.

The annual appeal is being launched this October to coincide with the National Reuse month.

As in previous years, bicycles suitable for refurbishing should be strong and sturdy, mountain bike style, have minimum 24” wheel size and mountain bike type tyres. Racer style bikes are not sought as part of this collection.

Suitable bikes can be dropped off at any of the Council’s six Recycling Centres (Laghey, Dungloe, Carndonagh, Stranorlar, Letterkenny & Milford). Please check your local centre for opening hours, visit www.donegalcoco.ie or www.brysonrecycling.org.

Connie Gallagher, Manager of Bryson Recycling added ‘We are delighted with the success of this venture in previous years and are fully supportive of the appeal going forward and we look forward to a good response to this fantastic scheme once again’.

“While only certain sizes and caliber of bikes are appropriate, the local drop off points make collection so much easier, and now with the added bonus of additional storage capacity and the transport to Loughan House being handled by the Irish Army, we are certainly making great progress as our anticipated capacity has now also been increased accordingly’, says President Ed Wickes of Letterkenny Rotary Club. Donegal is now one of eleven counties involved in this national appeal throughout Ireland.

Donated bicycles will be transported by the Irish Army to Loughan House, Co. Cavan one of the Irish Open Prison Centres, where the prisoners there will refurbish them prior to being shipped off to The Gambia.

To date, Rotary have transported approximately 5000 bikes to Africa, and the Irish Prison Service through Loughan House has been involved from the outset.

Rotary Ireland has expanded its commitment to collecting, refurbishing and delivering unwanted bikes to school children in Africa giving them the chance of a better life and open up many more opportunities. As many have to travel long distances to and from school, often in searing temperatures and doing this on foot can be difficult at best, so having a bike can make a huge change for the pupil and family alike as it can be utilised in other ways to help out their communities.

While providing these children with bikes for school, Rotary are also helping those much closer to home, namely the prisoners at Loughan House Open Centre Co. Cavan who are also getting the chance of furthering their own education.

Their participation in this project allows them to study for a City & Guilds FETAC Bike Mechanics course which ultimately will help with their own rehabilitation into society and perhaps aid their job prospects in the long term, as well as the satisfaction of working on such a worthwhile charitable project.

Suzanne Bogan Waste Awareness Officer with Donegal County Council said “this is a great initiative to be involved in and it fits perfectly with the aims and ethos of Reuse month. We were delighted with the opportunity to continue our involvement with Rotary and this campaign, as it is such a positive one. The Council were successful in a funding application under the Anti-Dumping Initiative which will allow for the collection of a greater number of suitable bikes at each of the Council’s six Recycling Centres. The additional funding under the Anti- Dumping Initiative will allow for the extension of this initiative beyond October. It is important that people take note of the type of bikes requested once again this year;

• strong sturdy bikes that can withstand rough terrain,
• bikes to suit both primary and secondary level students, with a minimum of 24” wheel size,
• in reasonable repair
• and having mountain bike type tyres.

For information on the opening times for your local Recycling Centre visit www.donegalcoco.ie or https://www.brysonrecycling.org/donegal-recycling-centres/

Get on your bike for Letterkenny Rotary Club was last modified: September 29th, 2021 by Staff Writer
Facebook0Tweet0LinkedIn0Print0