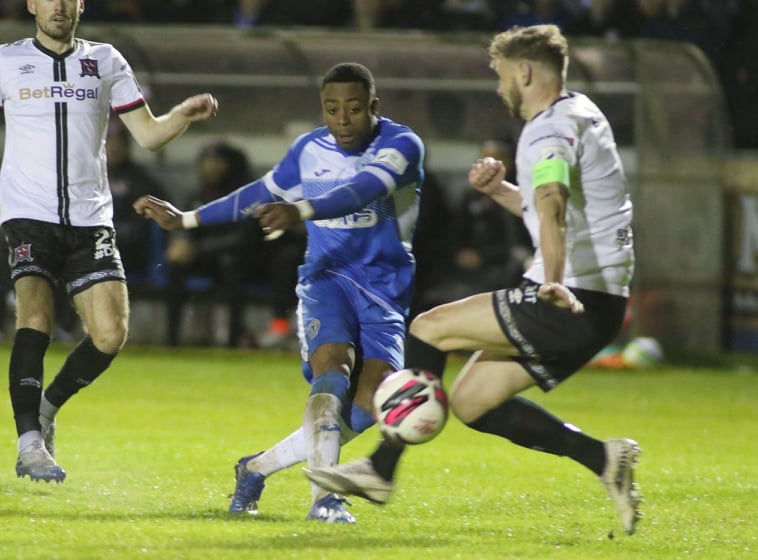 Owolabi bagged his ninth and ten goals of the season in another exciting tussle between these two.

With Dundalk training to Owolabi’s first-half opener, Dundalk turned the game on its head with two goals in as many minutes just after the hour.

However, Owolabi earned Harps a share of the spoils and Ollie Horgan’s men are now in the curious position of being as many points off the relegation play-off spot – five – as they are away from fourth place.

Michael Duffy’s impending exit might have been confirmed yesterday, but the winger showed how important he’ll be to Dundalk in the coming weeks with the Dundalk equaliser. 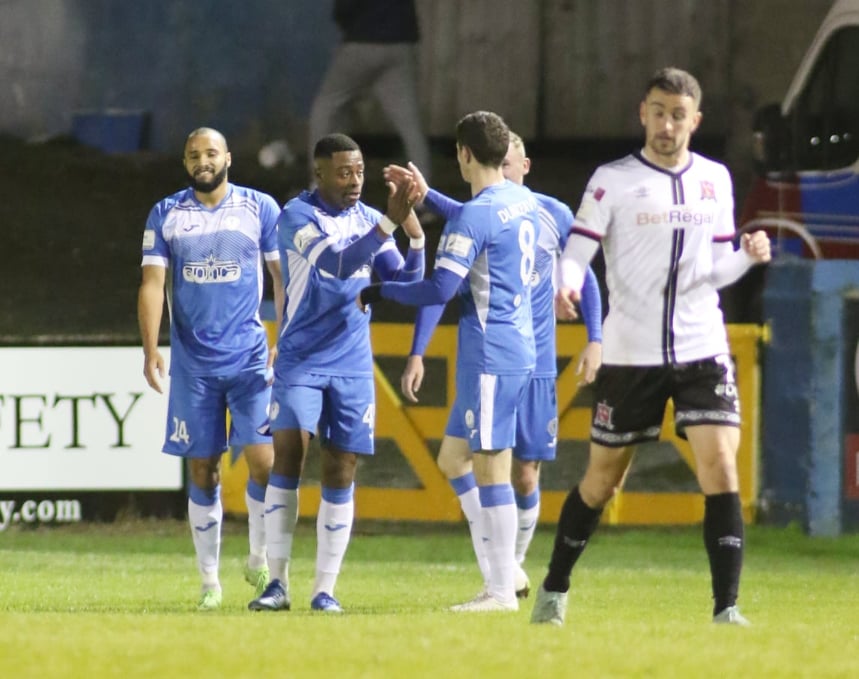 Duffy, a former Kildrum Tigers youth, will return to Derry City at the end of the season. Duffy sparked big celebrations among the away support as he curled a stunning free kick way beyond the reach of a helpless Gerard Doherty in the 61st minute.

Shane McEleney was penalised for a foul on Pat Hoban and Hoban made no mistake from the spot.

Finn Park was briefly silenced, but the old place stirred again on 69 minutes.

Owolabi weaved his way into the Dundalk penalty area and tucked home inside the far post for the equaliser. 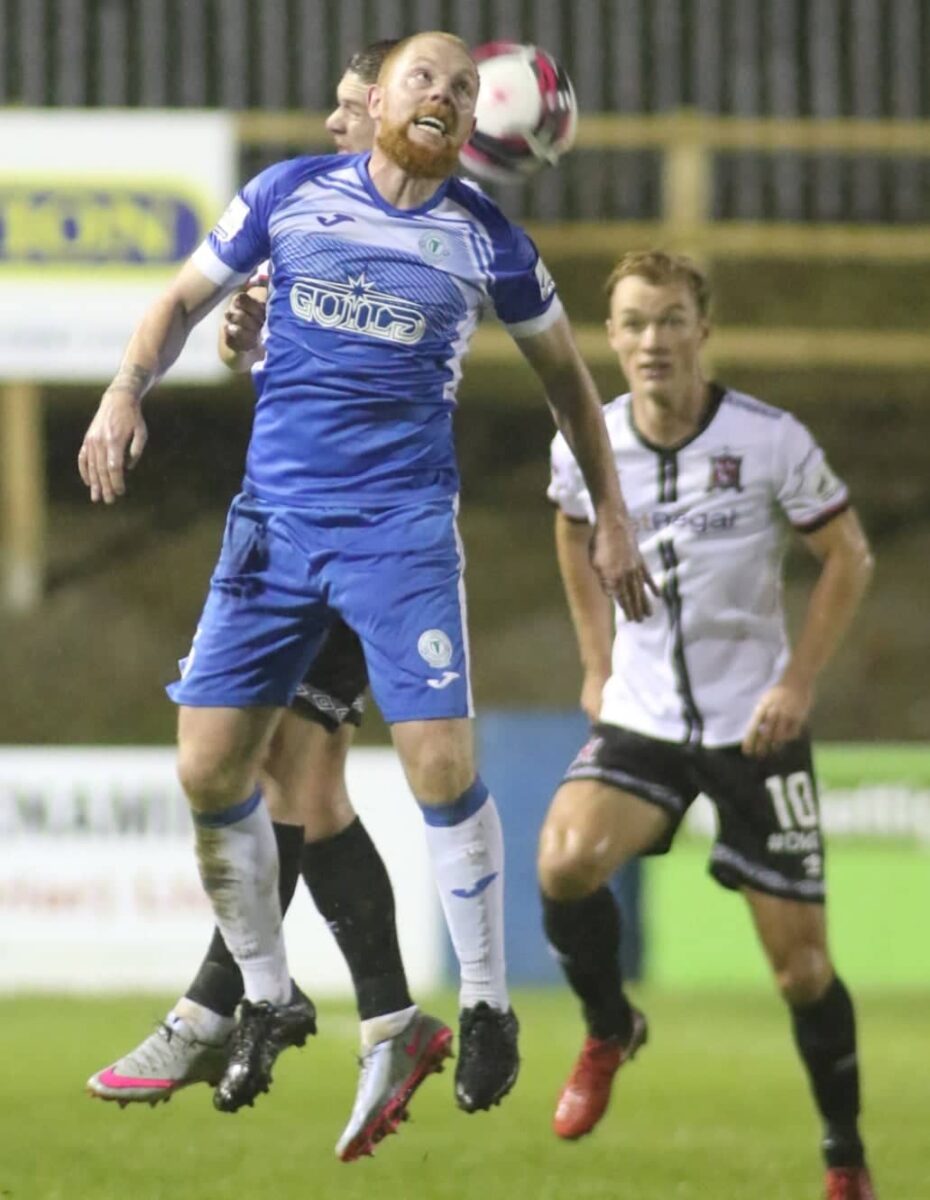 In between times, Barry McNamee and Sean Murray fired wide at either end.

Two weeks after they played out a 3-3 thriller here in the FAI Cup, this night could have twisted further, but Peter Cherrie saved from Ethan Boyle and home sub Dan Hawkins flashed narrowly wide.

Owolabi fired Harps in front on 19 minutes. Dave Webster’s ball into the danger zone created the chance. Owolabi deftly turned before clipping a tidy shot right into the bottom corner beyond the reach of Dundalk ‘keeper Cherrie.

Dundalk had began the better and Pat Hoban fired one shot of warning just past the far post. Ryan Connolly was dispossessed just outside the Dundalk penalty area and the Lilywhites countered at pace, Hoban curling narrowly wide. 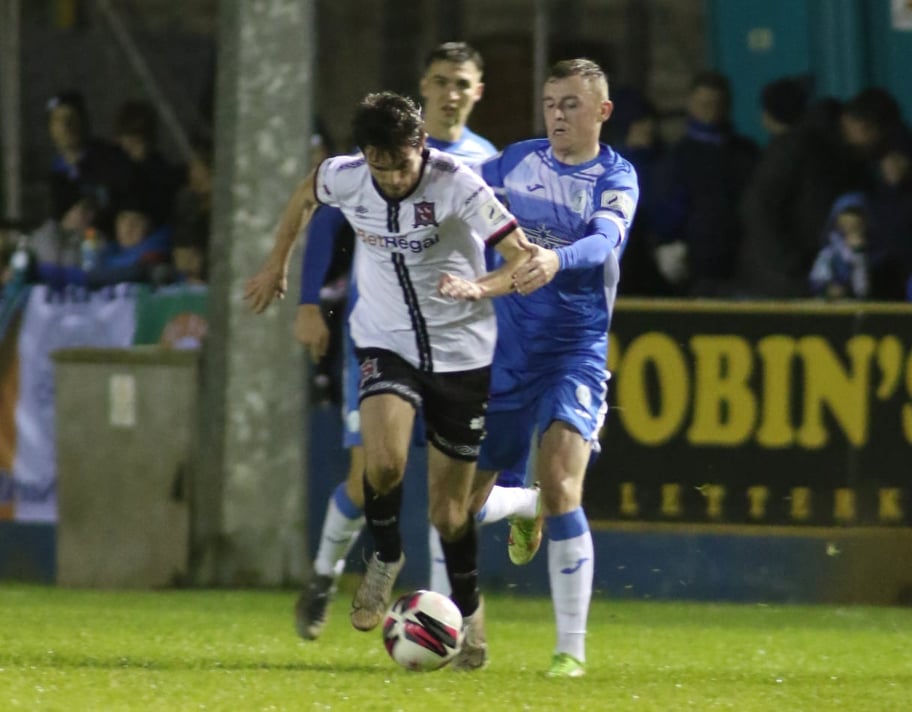 Dundalk had an early penalty claim when arguing that the ball had struck the arm of Harps defender Ethan Boyle. The officials, though, waved away the shots from Dundalk boss Vinny Perth.

Horgan kept faith with the same eleven that began last week’s excellent 2-1 away win at Bohemians, preferring veteran goalkeeper Doherty ahead of Mark Anthony McGinley, available again after a suspension.

Doherty parried from Sean Murray in the 35th minute before Sean Boyd stung Cherrie into action from a free kick soon after.

Boyd scored a dramatic 95th minute equaliser here a fortnight ago in a pulsating 3-3 draw in an FAI Cup quarter-final that was only settled after extra time in an Oriel Park replay. They met here for the third time in 15 days and it was obvious that the sides were familiar with each other. 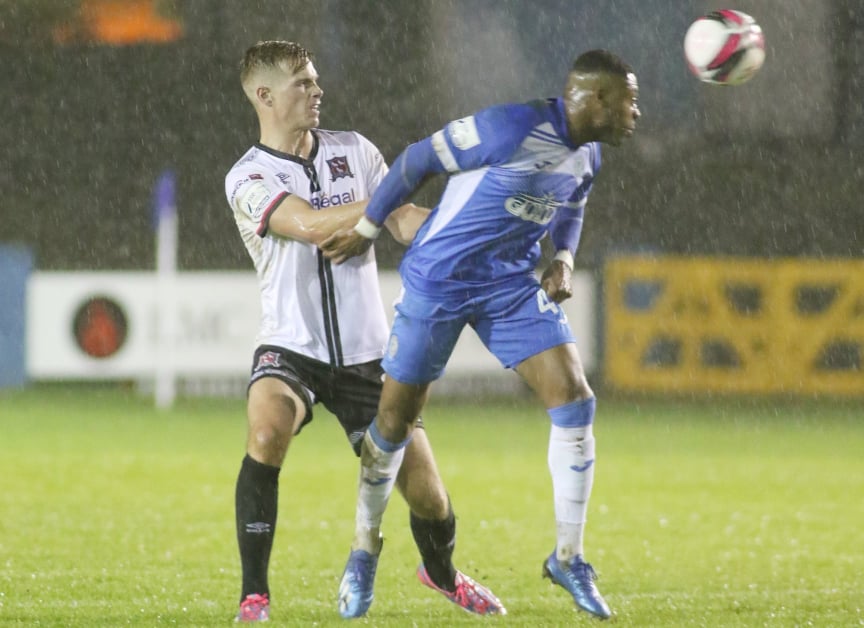 Four minutes before the break, Owolabi, under pressure on the edge of the six-yard box, headed over from a Barry McNamee cross, while Jordan Mustoe – who was controversially sent off in the first Cup meeting – shot much too high.

Owolabi, though, would still have a key say in the night, his cool finish securing a point.