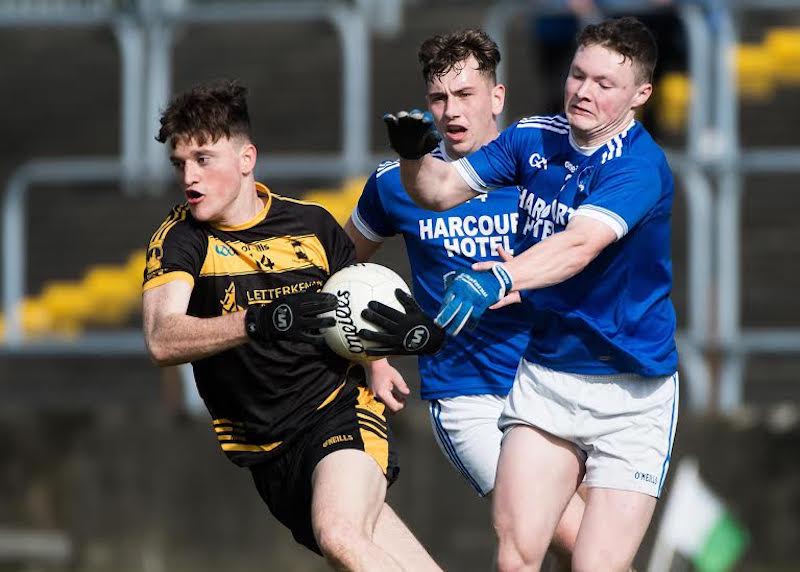 ST EUNAN’S proved too strong for Aodh Ruadh as the Letterkenny men had 13 points to spare at O’Donnell Park.

A Niall O’Donnell penalty in the 37th minute was the score that set St Eunan’s on their way and Rory Kavanagh’s men copper-fastened the victory when sub David Boyle tucked home from close range four minutes from the end.

St Eunan’s hit 1-7 in the last 18 minutes and they were firmly in command of things from there to the finish.

The first goal came seven minutes into the second half when O’Donnell – who was wide with a penalty in the first half – rolled home from a penalty after Padraig McGettigan was fouled.

St Eunan’s had the ball in the net moments earlier when McGettigan knocked in from an O’Donnell ’45, but Jimmy White, the referee, chalked it off for a square ball infringement.

O’Donnell’s penalty put St Eunan’s 1-7 to 0-6 in front and a succession of points arrived before Boyle slotted home after Niall O’Donnell and Conor O’Donnell did the approach work.

St Eunan’s were given a big chance on 20 minutes when O’Donnell’s jersey was tugged, but the Donegal player rolled his penalty wide of the target.

St Eunan’s had another goal chance soon after, but Kieran Tobin fisted over from the edge of the square when Eoin McGeehan cleverly retuned the ball across the goal face.

A Philip Patton free had the scores level for the fifth time, but Eoin McGeehan kicked St Eunan’s into a 0-6 to 0-5 lead by the changeover.

Aodh Ruadh returned to the senior ranks following their winning of the Intermediate Championship last year.

The Ballyshannon club, out of the senior grade since a 2010 defeat to St Eunan’s, have transitioned well, a routined win over Four Masters followed by last week’s comeback against Naomh Conaill. Form nine points down, Aodh Ruadh carved their way back to earn a draw with the Dr Maguire Cup holders.

David Dolan’s pointed mark got Aodh Ruadh – who were without the services of on-duty soldier Johnny Gethins – off the mark and the teams were level three times before they parted for the first water break, the scores tied at 0-3 apiece.

St Eunan’s had inched in front when Padraig McGettigan batted over from Conor O’Donnell’s dropping ball in in the 11th minute, but Philip Patton’s brace, either end of the water break, tipped the scales back in Aodh Ruadh’s favour.

After O’Donnell was off cue with his penalty, O’Donnell arched over off his left foot to bring St Eunan’s level again.

The goals arrived a bit earlier this time around as St Eunan’s moved closer to the last eight.