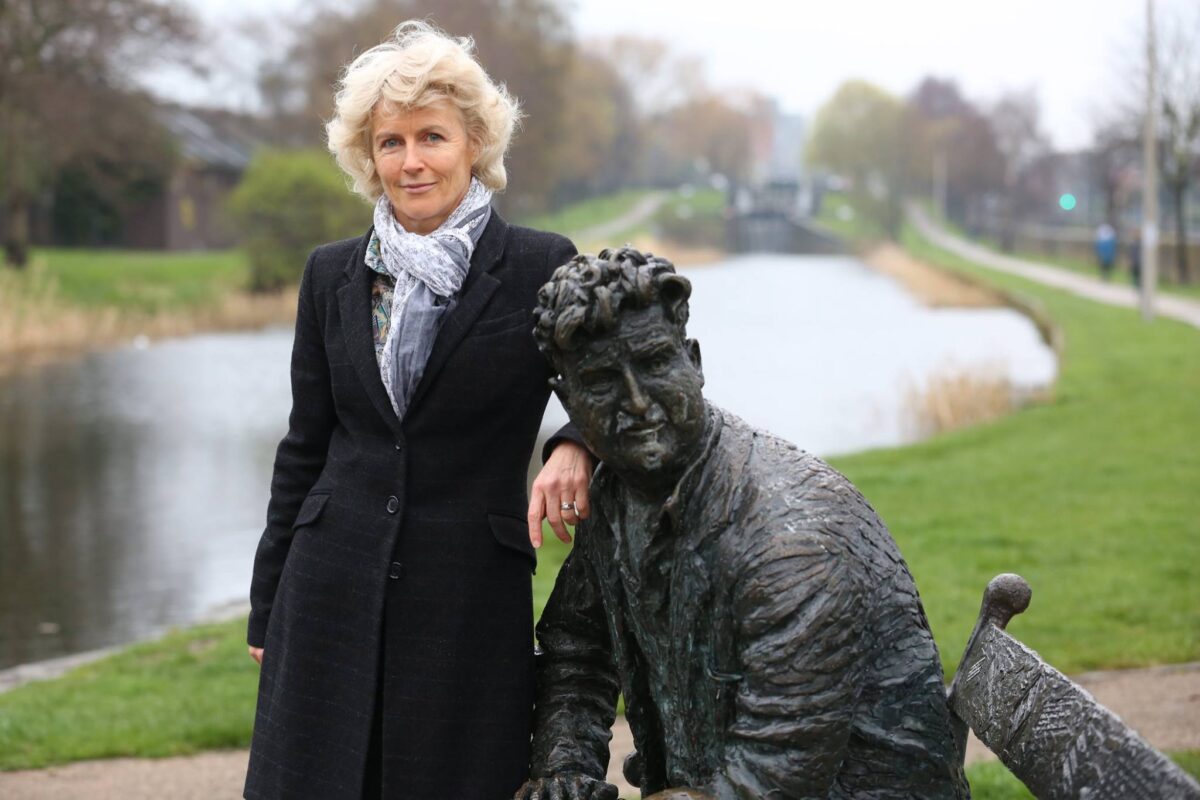 AUTHOR of such famous Irish classics as The Quare Fellow, The Hostage and Borstal Boy Brendan Behan was a literary giant who blazed a red-hot trail in world literature only to burn out at the way too early age of 41. But in his short life he did a lot of living, and he left a lot behind.

The sixth Annual Letterkenny Cathedral Quarter Literary Festival – which will be held on the weekend beginning Friday, 15th October – will commemorate all this, but more specifically the festival aims  to commemorate the 60th anniversary of the visit of the writer to Letterkenny.

Giving more than a little authenticity to the proceedings Blanaid Behan Walker, the daughter of the famed playwright, will officially open the festival at the Letterkenny Institute of Technology at the Lecture Room 1101.  It really does promise to be a wonderful tribute night to the playwright. Proceedings get underway at 8p.m.

According to Letterkenny Cathedral Quarter spokesperson, Donnan Harvey, the evening is intended to capture the larger-than-life person that was Brendan Behan.

Donnan stated: “It was a famous story back in the day in that it was the talk of the town when in 1961 Behan visited the Rainbow Bar on the Main Street whilst holidaying in Donegal. His visit was reported in the ‘Derry People’ (now the Donegal News) which stated in a report that he entertained the patrons ‘lucky enough to be there’ with ‘typically outspoken comments on affairs of the moment’”

By all accounts Behan was a unique person, a massive personality.

According to the Cathedral Quarter spokesperson during his 1961 visit the playwright went to the La Scala Cinema at the Port Road to see a film in which he himself was featured. In the film he sang a song so when that came on the screen Brendan, sitting in the audience, started singing along. He claimed afterwards it would be the only time in the history of Letterkenny that a duet was song by one person!”

Behan must have liked Letterkenny as, according to the same report, he had visited the town the year previously whilst holidaying in the Glenties area.

To get a flavour of Behan and his world following the official opening there will be a presentation and review of his literary work and its place in Irish Cultural and Social History.

This will include a talk from author and journalist Brendan Lynch, a contemporary of both Behan and Patrick Kavanagh, with snippets from the plays which will include participation from the ‘Elusive Theatre’ and Celine McGlynn in the company of Brendan Behan’s daughter, Blanaid.

Following the opening event, there will be a special online presentation from the Raphoe Diamond Writers at 9.45pm on our Facebook page with readings from Pauric Gallagher, Margaret Doherty and Celine McGlynn from the Group.

The following morning there will be a Literary Workshop titled ‘The Influence of Writing’ in Dillons Hotel at 11am chaired by Gareth Wilkinson. Among his guests will be Blanaid Behan Walker, Brendan Lynch, and local author Sean McGlynn. Sean’s debut novel Control Freak, received wide acclaim.

A native of Letterkenny Sean is a former solicitor of thirty years experience. ‘Control Freak’  details an abusive marriage relationship as told by the story’s victim and is the culmination of Sean’s work in Family Law and a diverse range of the cases he dealt with during his career.

On Saturday, at 4pm, in Dillons Hotel on the Main Street there will be another special Brendan Behan event where Professor Regina Uí Chollatáin, Head of the UCD School of Irish, Celtic Studies and Folklore will discuss the Gaelic writings of the famous Irish writer.

Also a  Letterkenny native, Professor Regina Uí Chollatáin will deliver in Irish but translations will be provided by Donal MacGiolla with headsets being provided by Donegal County Council.

As regulars visitors will know the festival always celebrates the area’s connections with Jane Austen – this time it’ll be a special tea party in Dillons Hotel at 8pm on Saturday to celebrate the world-famous novelist. This special tea party will feature Austen scholar, Rose Servitova and Heritage Expert Melissa Shiels and is broken into two parts.

The latter will give a talk on how women were expected to dress back in the day whilst the former will look at the role of society at the time of Austen’s writing, especially the start of ‘The Season’ in early October when young women were introduced to society with the aim of procuring a rich husband high on the priority list.

Donnan Harvey is anxious to get across that there is so much more to offer over the weekend.

He said: “On the final day of the festivities, we will be having a further two events and we are delighted that Donegal Chamber Music Society is making a return to the Literary Festival. The World Premiere of Sean Doherty’s MOBHI Belt is a joint concert by members of the Donegal Chamber Orchestra and The Conwal Singers and is part of #Colmcille1500 celebrations takes place in the splendid surroundings of the Glebe House and Gallery.

“Mobhi Belt tells the tale of an important yet little-known incident in the life of Colmcille, and it could hardly be more relevant – it tells of the effect of a pandemic in Colmcille’s monastic career. The concert will also include music by French composer Camille Saint-Saens, who died 100 years ago, and Argentina’s Tango Master Astor Piazzolla, born in 1921.

The final event is Poetry and Songs with Mary Turley-McGrath and Jean Curran in Dillons Hotel at 6pm on Sunday.

This is the concluding event to the festival. Mary will read a selection of her poems which celebrate the natural beauty, history, landscapes and seascapes of Donegal. There will be a selection of songs from Jean with music on the guitar to finish on a local note from this growing Literary Festival.

If people are unable to get to our final event, ‘Poetry and Songs’ will be available on the Quarter’s Facebook page at 8pm.

The festival has been funded by the Department of Tourism, Culture, Arts, Gaeltacht, Sport and Media ‘Small Scale Local Festivals & Summer School’ Grants.

Donnan Harvey concluded: “We would like to thank our main sponsors Dillons Hotel and Patrick Gildea Hairdressing. Also, the Festival has been produced in association with Wild Atlantic Productions. “

Contact Tracing will be in place at all events. Full details of all events are on the Letterkenny Cathedral Quarter website. To ensure your place contact Donnan Harvey on 086 345 2457 and book early to avoid disappointment.