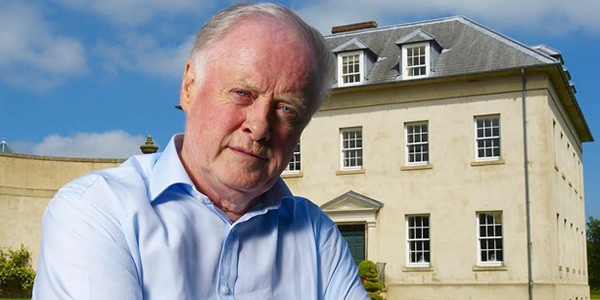 There is widespread sadness across Donegal following the death of Sir Gerry Robinson.

The businessman and television presenter, who lived at Oakfield House in Raphoe, passed away earlier today. He was 72 years old.

Mr Robinson was born in Dunfanaghy in 1948 but left Ireland in his teens to head for England with his family.

Gerry was born in Dunfanaghy to Betty and Tony Robinson, ninth child of ten. He grew up in the Old Cottage Road, Dunfanaghy before attending St. Mary’s Seminary of the Holy Ghost Fathers in Lancashire.

He started his business career at Matchbox Toys in England.

Whilst working at Grand Metropolitan, he met and married Heather Leaman in 1990, with April born in 1991 and Tim in 1994.

Gerry was always a Donegal man at heart, and after spending many happy family holidays at Ranny House in Kerrykeel, the family moved back to Ireland in 1998, making Oakfield Park their home.

In 2003, Gerry was knighted for his contribution to the arts and business, and was known as a captain of industry, producing many successful TV series.

Oakfield Park became his passion, renovating the house and gardens with his wife Heather. Gerry was a talented artist and carpenter.

Everyone who met Gerry will remember him for his kindness, humour and generosity of spirit.

He was greatly admired and loved by all.

He is a sad loss to his devoted family and friends.

Despite his high-profile Sir Gerry was a part of the local community and quietly supported many local groups including children’s schools.

He particularly enjoyed the narrow gauge railway which he had installed in the grounds of Oakfield House and which is still enjoyed by the public.

He was the ninth of 10 children born to Anthony and Elizabeth Robinson, an Irish father and a Scottish mother.

He briefly trained to become a Catholic priest at St. Mary’s Seminary of the Holy Ghost Fathers.

In 1974, he left Matchbox to work for Lex Vehicle Leasing as a management accountant. He then rose through the company before being appointed finance director. In 1980, he joined the UK franchise of Coca-Cola, owned at that time by Grand Metropolitan.

In 1983 he was appointed managing director of Grand Metropolitan’s international services division. In 1987 he led the successful £163m management buyout of the loss-making contract services and catering division of Compass Group, known as Compass Caterers. He joined Granada Television as CEO in 1991.

Robinson’s first foray into broadcasting was a revival of the BBC’s Troubleshooter show, originally fronted by Sir John Harvey-Jones in the early 1990s. Titled I’ll Show Them Who’s Boss and co-produced by the Open University, in 2004 he went into struggling businesses to try to turn them round by advice and mentoring.

In June 2009 he presented a special edition of The Money Programme entitled Gerry Robinson’s Car Crash investigating the history and future of the British motor industry. He regularly appears on British TV as a celebrity businessman.

In July 2009 he started a TV series called Gerry’s Big Decision, in which he reviews struggling companies and decides whether it is worth investing his own money to save them. From 14 January – 18 February 2011 he presented BBC2 show Can’t Take It with You, which helps people to write their wills.

Robinson also served as chairman of the Arts Council England for six years from 1998.

House, Wake and Funeral are strictly private to family only please.

Funeral leaving his late residence on Sunday morning at 11.30am via the Main gate at Oakfield Park, White cross travelling to Lakelands Crematorium, Cavan for private family cremation service.