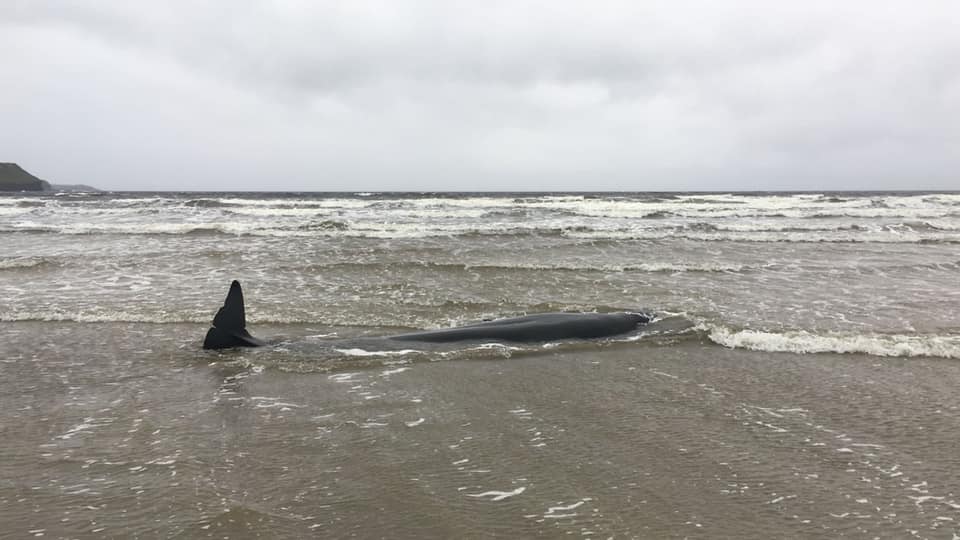 Stranded whale dies on Donegal beach despite efforts of volunteers

A stranded pilot whale passed away on a Donegal beach on Friday, despite the best efforts of local volunteers.

Nicola Coyle, a live stranding responder with the IWDG, was quickly off to assess the situation.

She was assisted by local surfers, NPWS ranger James Hegarty, and fellow IWDG members Annie and Rebecca Birtwhistle, Mathew Duffy, and many others.

Great efforts were made to make the dolphin as comfortable as possible by putting it upright and keeping it cool.

Jim O’Donovan, a local vet, suggested there was a strong indication that the animal was very ill.

“In these situations, for the welfare of the animal, the best outcome would be a quick, natural death,” an IWDG spokesperson said.

“Local and county council vets discussed their options. We must remember that with these animals, highly toxic, heavily regulated chemicals and specialised needles are required to carry out euthanasia properly. Things which are very difficult to come by. In addition, reactions to the drugs can vary depending on the individual and species, with some exhibiting very dangerous, excitatory reactions which may put the rescue team in danger.”

The animal was, unfortunately, still alive the following morning.

Once the drugs were sourced, the animal was once again in the water as the tide was in.

It is highly dangerous for anyone to attempt to euthanise an animal while they are in any bit of water.

Therefore, the decision was made to wait until the tide was back out, at which point the animal had passed.

“IWDG continues to push to get the Large Whale Stranding Protocol accepted by all proposed contributors and are in the process of organising a meeting with NPWS, various other local authorities and organisations to get this protocol in place,” the spokesperson added.

“Thank you to all who assisted with keeping this pilot whale as comfortable as possible in its final moments. IWDG will be holding another live stranding course in Cork in the coming months. The more trained responders we have on the ground the better.”

If you wish to become involved in the stranding scheme, please contact Stephanie at strandings@iwdg.ie