Following a two year sabbatical due to COVID-19, TG4’s highest rated country music show, hosted by Daniel O’Donnell, is finally back ‘on the road’.

The new format of Opry le Daniel i gConnacht which sees the Irish country music legend and friends performing in venues in different provinces of Ireland, brings us the first concert from the renowned Theatre Royal, Castlebar.

The first concert of this series will air next week on Tuesday, 26th October at the usual time of 9.30pm, and included in the show titled ‘CLASSIC COUNTRY’, will be one of our ‘Queens of Irish Country Music’, Sandy Kelly, singing such classics as ‘Silver Threads & Golden Needles’ and ‘Last Thing on my Mind’.

Also on stage will be the renowned singer/songwriter from Westport, Frank Mc Caffrey and an artist who has made a massive impact on the country music scene in recent years, Patrick Feeney.

Whilst each artist will be appearing for their solos, they will also be accompanied by host presenter Daniel, performing duets and a show finale.

Future Opry concerts will include ‘New Country’, when Daniel will be introducing The Ennis Brothers, Clodagh Lalor , and from Creeslough, Co. Donegal, our very own Ailish Mc Bride, and also ‘Celtic & Country’, a show which proved a tremendous success when aired from the Millennium Forum in Derry in previous years. 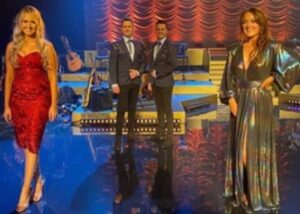 Appearing on this year’s show will be Sean Keane, Cathy Jordan and ‘The Voice of Ireland’, the irrefutable Tommy Fleming, showing on the following week, Tuesday 2nd November.

Tune into TG4 on Tuesday 26th October, for the new series of Opry le Daniel, ‘on the road’ from Castlebar.