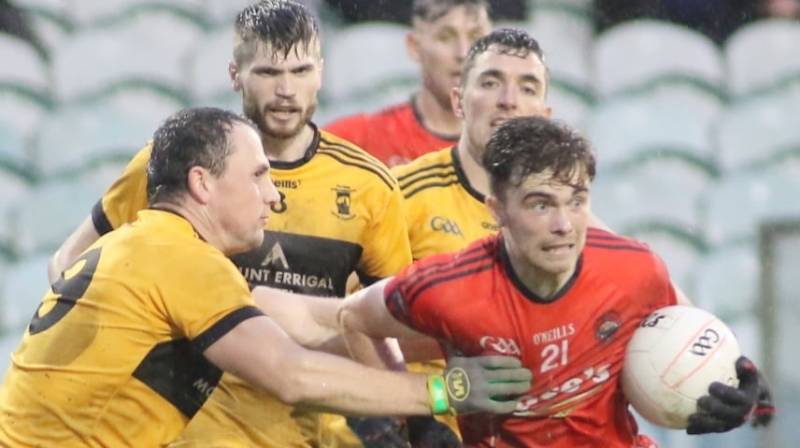 A low scoring game at MacCumhaill Park may have been largely down to terrible overhead conditions and the heavy rain made underfoot conditions very difficult.

We had the expected cagey start with St. Eunan’s having most of the early possession and St. Michaels getting plenty of players behind the play.

Despite less time on the ball it was St.Michaels who scored first, a super long-range effort from Michael Langan in the 6th minute.

The only other score before the first water break came from corner-back Aaron Deeney in the 16th minute to leave it 0-03 to 0-02 to St.Michael’s.

Christy Toye brought a few happy memories back with the game’s next score , a classic with the outside of his right foot from 40 metres, worth the entry fee to see.

Conor O’Donnell Sr. replied for Eunans three minutes later to leave one point in it, and then a huge blow for St. Michaels when full-back Liam Paul Ferry received a straight red card following an off the ball incident involving Niall O’Donnell.

Eunans were reduced to 14 men for a ten minute period, Aaron Deeney receiving a black card after colliding with Stephen Doak off the ball.

Niall O Donnell converted a 30 metre free to level it up deep into injury time and the game went to the half-time break at 0-04 apiece, with the overhead and underfoot conditions the dominating features of the game.

With no sign of any improvements in the weather with the floodlights shining brightly on MacCumhaill Park, Half-time sub Padraig McGettigan opened the second-half scoring with a super point from out wide on the right and two minutes later a goal chance for Eunans when McGettigan’s shot for point dropped short and Oisín Langan bravely denied Niall O’Donnell with a save at his feet.

It was level again two minutes later , Carlos O Reilly with another excellent score from the stand side.

Despite the energy sapping conditions, 14 man St.Michael’s continued to make things very difficult for Eunans with their hard work on and off the ball. The numerical advantage began to tell and St.Eunan’s scored the next four points , Eoin McGeehin with his second, two excellent scores from Niall O’Donnell , and a point apiece from Eoin Dowling and Kieran Tobin.

It wasn’t easy for St.Eunan’s and the sending off had a huge effects in the latter stages of the game but they are through to their first final since 2015 where they will face the winner of tomorrow’s game between Kilcar and Naomh Conaill, throw-in at 1.45pm.