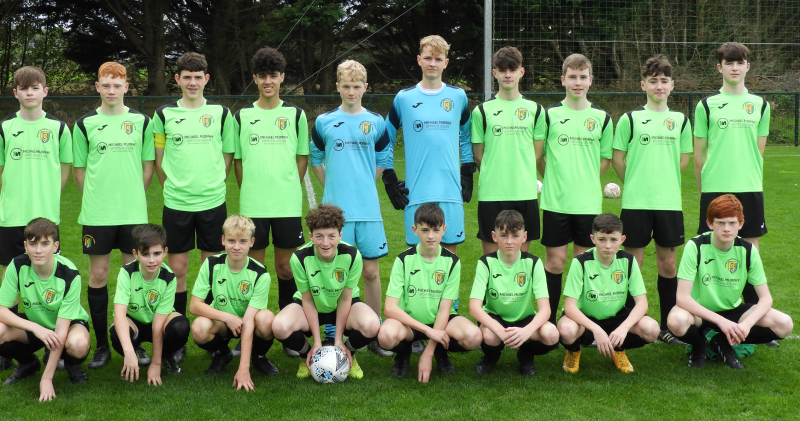 Donegal Schoolboys qualified for the last 8 of the Kennedy Cup today after a hard fought win in Ballyare qualifying ahead of Inishowen Schoolboys on goal difference after both teams finished on 7 points from their opening 3 games.

Donegal Schoolboys U14 2-1 Dundalk Schoolboys U14
Dundalk started strong creating a number of good goal scoring chances and hitting the woodwork on 11 minutes.
Donegal made a few tactical changes which stemmed the flow and Donegal began to take a foot hold of the game.
During a spell of consistent pressure they forced a corner which was cleared to Eamon Coyle on the edge of the 18 yard box. Setting himself up with his first touch he unleashed a pile diver which rose into the top corner leaving the keeper with no chance. 1-0 to the hosts.
Cathal Gallagher and Daithi Rayes were now dominating the defense with Liam Mc Ginley alert to any dangerous passes the Dundalk players were attempting to thread through the Donegal defence.
The Dundalk midfield were both physical and technical.
The trio of Caolan Duffy, Tiarnan Callaghan and Luke McGuinness were equal to Dundalk trio.
Donegal converted to a back three at the end of the first half in an attempt to hold on to their slender lead.
The second half saw the introduction of Heyden Gault and Ryan McNeill. However it was the Cooley Men who were in top. Harry Pearson made a string of quality saves but could do nothing to prevent Dundalks equaliser on 52 minutes after good build up play down the right channel.
Donegal now needed somehow to rally again as the word had filtered through that I ishowen were 2 up against Mid Ulster.
Donegal win a free kick after Caolan Duffy was taken out 25 yards from goal. Luke McGuinness hit a wonderful free kick which the keeper did well to parry. Duffy was first to react nipping in to nick the ball from the keeper, spinning and setting up Dhahi Rayes to convert from close range.
Donegal now had victory in their sights, defended deep and managed to hold on with another massive save from Harry Pearson. The final whistle sounded to the great relief of the Tirconaill boys.
Eoin McNelis was immense after moving to centre back and overall a great team performance.
Donegal will play their quarter final in 3 weeks time with the opposition to be decided by a draw yet to take place.
Donegal Schoolboys reach quarter-final with win over Dundalk was last modified: October 24th, 2021 by Staff Writer
Facebook0Tweet0LinkedIn0Print0