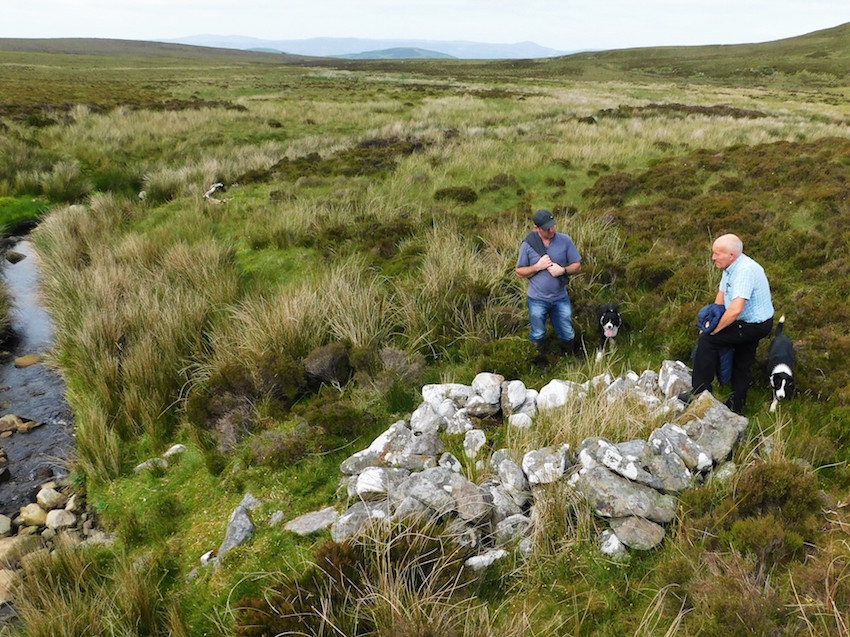 A number of historic stone huts have been unearthed near Carndonagh in foothills of Sliabh Sneacht.

The Colgan Heritage Committee is planning to record a series of old ‘booleying’ sites across Inishowen, following their discovery in recent days.

The site, which includes a number of fallen-down stone structures, has been unearthed among the heather at the base of Sliabh Sneacht mountain.

These booleying sites were once vital outposts for farmers who would move their livestock to higher ground in the spring and summer months and live up there with them.

This was a phenomenon all over Europe throughout the 19th and early 20th centuries. Land was often scarce and some families had only a rood of land meaning that the booleying lands were very valuable – although they are now largely lost in the landscape.

Winter is the best time of year to uncover the former sites as there is less overgrowth and vegetation, while hillside tracks and ‘lazy beds’ – used for growing potatoes – become much more visible.

The recent find in the foothills of Sliabh Sneacht, Inishowen’s highest peak, came to light thanks to the watchful eye of local famer Liam McLaughlin, who initially reported the discovery.

Hugh Farren, Chair of the Colgan Heritage Committee, then contacted Dessie McCallion, who has an in-depth knowledge of the area and examined the finds.

The discovery consists of two round hut sites and one rectangular stone structure.

The site was photographed and an artist’s impression was made. It is believed that this was an important booleying site dating back two hundred years. While similar sites once existed in many townlands in upland areas, dense overgrowth has hidden them from view but in many cases the original structures were damaged by the removal of stones.

Booleying sites were once common in the hills of Inishowen.

Young people would take turns to herd the cattle and they remained on site in small stone huts which offered shelter. Cattle were milked on a daily basis, so there was an abundant supply of fresh milk too.

An artist’s impression, by Meadhbh Farren, depicts how the site would have looked hundreds of years ago, with a shepherd keeping watch over a number of animals, including hens, geese, pigs and cattle. There would also be a little vegetable garden, often to grow potatoes and other plants, and a campfire for cooking and heat.

The new Sliabh Sneacht finds provide firm evidence that this is an undisturbed booleying site.