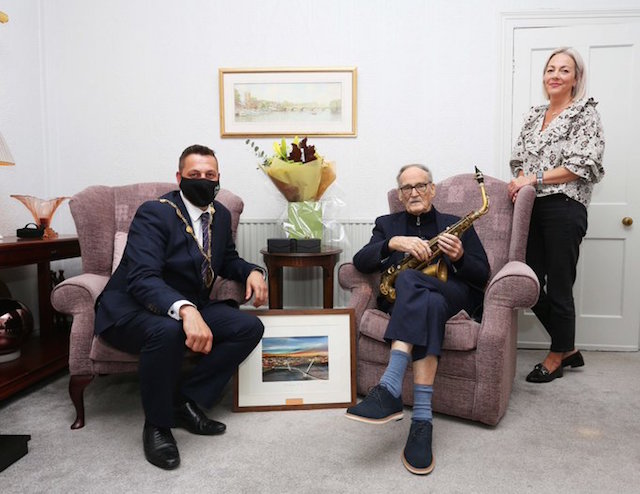 Donegal-born musician Gay McIntyre, considered one of the greatest jazz musicians Ireland has ever produced, has sadly died. He was aged 88.

Mr McIntyre died yesterday morning surrounded by his family at his home in Derry.

The alto sax and clarinet player had enthralled generations of fans, with a career spanning more than 70 years.

He played with some of the the greatest names to ever grace the world of jazz including Acker Bilk, Louis Stewart and Nat King Cole.

Gay was born in Ballybofey, Co Donegal, on 24 April, 1933, and Christened George Albert due to his English grandfather’s fascination with the Royal Family.

He is pictured above recently meeting Mayor of Derry Alderman Graham Warke at his home.

Gay’s family moved to Derry and Gay began playing music in his mid-teens, performing with bands in ballrooms across Derry and Donegal.

Gay’s introduction to jazz came indirectly through his father, Willie, when he and his band played in the Corinthian ballroom during World War II.

With the strategic importance of the city’s port, servicemen from the U.S. and Canada flooded into Derry, with the city even having its own “Yankee base”.

It was one of those servicemen who gave Willie McIntyre a Benny Goodman record which he took home to his son.

Speaking about the day he first heard music, Gay said: “My mother wound up the gramophone, I hadn’t heard four bars of the music before there were tears in my eyes.”

“My mother said to my father: ‘Whatever instrument that is, we have to get him one of them’.”

Gay’s father, who earned 27 shillings a week at the time, saved up for two years to buy his son a clarinet.

“My father handed it to me and said: ‘This is a clarinet and this is for the rest of your life’,” Gay remarked.

Gay got his break on television, joining the band on UTV’s light entertainment programme, Teatime With Tommy, hosted by pianist Tommy James.

Gay played on into his late seventies when, in 2011, he recorded his first album, The Music Within Me, with the help of trumpet player, Linley Hamilton.

The offers for Gay never stopped coming. He was one of the show-stoppers at both the Derry and Cork Jazz Festivals and also played at jazz festivals across mainland Europe.

Retirement was not in his vocabulary, and at 80, he reflected that his music was getter better and better.

“I’ve never had as many offers as I’ve had in the last year. For that to happen to you at 80 years of age is quite strange,” he said.

Most recently, Gay had fans – young and old – eating out of the palm of his hands every week during his residency at Bennigan’s jazz club in Derry, where his solos, to this day, remain legendary.