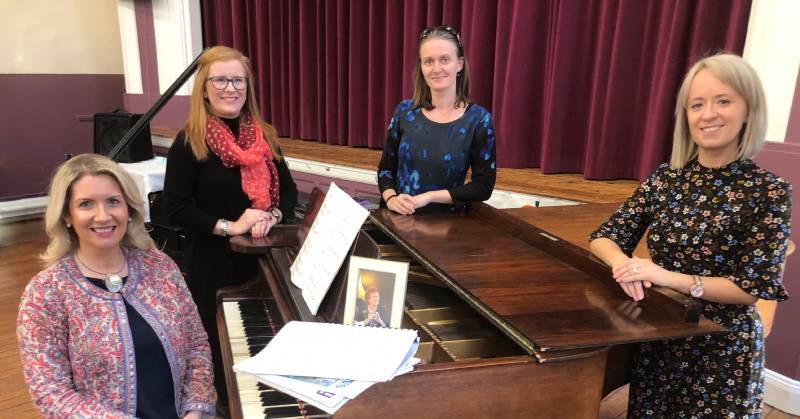 2021 marks the 30th Anniversary of the original foundation of the Rainbow Theatre Group, and with it sees the revival of this amateur music and drama group for children and young people in Letterkenny.

At the time of its original inception, there was little theatrical music and drama in the town for children, so an idea was formed by 14-year-old Treasa McKeown to form a new youth group.

And so, the Rainbow Children’s Theatre Group was set up by Treasa in 1991. After initial auditions, at the helm in the first number of years as Producer was Patricia Lynch, assisted by Kathleen Ruddy. Kathleen went on to become Producer in the latter years, and was assisted by Kate Doherty. Their annual variety shows “That’s Entertainment”, were performed to sell-out crowds every year in the Concert Hall in Loreto Convent.

Most former members carried on in amateur dramatics and music throughout secondary school and on into adulthood, while a significant number went on to pursue careers in music, theatre, dance, and television. Virgin Media’s Ciara Doherty and BBC’s Declan Harvey are some of the most well-known alumni.

Now under the leadership of Kathleen Ruddy’s daughter, Mary Lane, along with Audrey Coyle, the Rainbow Theatre Group is in the exciting phase of reforming with a vibrant new Committee and Production Team. They are devising a show that will be staged in An Grianan Theatre in 2022, with rehearsals taking place in their original home of the Loreto Concert Hall.

Mary Lane has spent more than 30 years on the stage and in musical performance. She has been a member of several music and drama groups, performing in countless musicals, cabarets and variety shows throughout the country and beyond over the years. It has always been a dream of Mary’s to continue in her mother’s footsteps and to bring the Rainbow Theatre Group back to life for a new generation.

“The Rainbow Theatre Group is an important and enduring part of my mother’s legacy, and I am now delighted at starting this next chapter in the Rainbow story,” explains Mary.

Music and performance has played a huge role in Audrey’s life. Audrey became the leader of the Donegal Youth Orchestra at age 15, and her love of music led her to become a music teacher. She has been teaching in Carndonagh Community School since 2003 and she thrives on sharing her passion for music with her students. She has co-directed, co-produced and co-choreographed countless productions over the past two decades. In that time, she has also been an active member of several music and drama groups in Letterkenny.

With her experience on and off stage and as a teacher, Audrey is very excited to bring back the magic of the Rainbow Theatre Group.

Audrey said: “On a personal note, Kathleen Ruddy was a close friend and Musical Mentor of mine throughout her life, so it is a privilege and an honour to be part of carrying on her legacy.

“The Production Team and Committee was always made up entirely of volunteers who have freely given their time, efforts, energy and skills for the benefit of the young people involved, and the new team will carry on in the same way.”

The new Production Team and Committee look forward to emerging from this turbulent time of restrictions with a new and invigorating group for children and young people in Letterkenny, and to allow them an outlet to express themselves through music, dance, drama and comedy.

“We look forward to welcoming a new generation of emerging talent, and giving them a platform to grow and develop their confidence and communication through performing arts, and to staging shows that the whole community can enjoy”, says Mary Lane.

Amateur theatre is expensive to produce, with shows costing thousands of euro to stage. These costs can include insurance, venue hire, royalties, costume hire, lighting and sound hire, printing costs, set construction materials and much more. The team has recently put out a call for local sponsorship to help cover many of these costs.

“We recognise that every business has faced challenges due to Covid Restrictions, and so we are extremely grateful for any level of sponsorship that is pledged to us at this time,” says Mary.

But of course, there can’t be a show without a cast! And now the Creative Team are ready to put out a casting call. The Rainbow Theatre Group will be open to children and young people aged 8-15 years. Cast members from all walks of life and of various performance abilities will be welcomed. It is not expected that participants will have any experience or formal training already. The Creative Team will be working on the assumption that it’s all new to everyone.

Mary said: “We welcome children and young people with all levels of experience, and no experience at all.”

Audrey added: “We are looking for children and young people with a variety of talents. Our show will comprise of singing, dancing, drama and comedy, so there will be an opportunity for everyone to shine!

“Auditions will be tailored to suit each child’s abilities and interests, so they will not have to audition for every aspect if they would rather concentrate on only one or two (ie singing and drama).”

Audition dates are set for two Saturdays – 20th and 27th November. Due to Covid restrictions, auditions will be held by appointment only in order to limit numbers attending at any particular time. To register your child for an audition, go to the brand new website and complete the online form at www.rainbowtheatregroup.com. If you need any further information, please contact Mary Lane on 0861684056, Audrey Coyle on 0871309192, or you can email rainbowtheatregrouplk@gmail.com. We also have a Facebook page www.facebook.com/rainbowtheatregrouplk which has frequent updates.

The Rainbow Will Shine Again in Letterkenny was last modified: October 27th, 2021 by Dáire Bonnar
Facebook0Tweet0LinkedIn0Print0