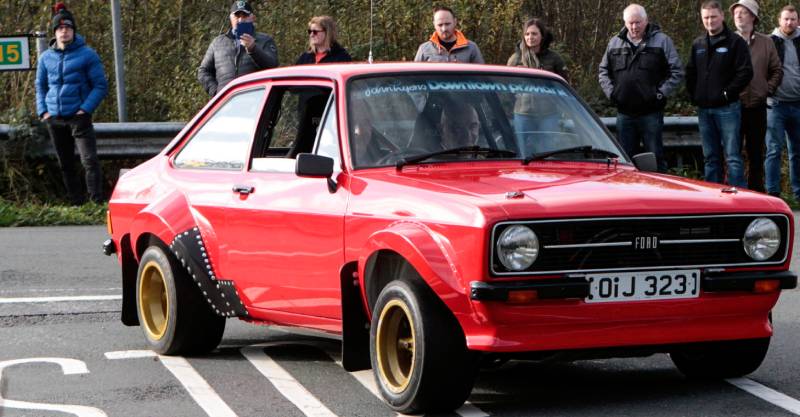 Beam me up Scottie

I am a child again in a different world in Donegal Town on Sunday morning watching all the rally cars and names that I grew up with.

It could well have been the harbour in Monte Carlo looking across the car park from the Frenchman’s Anchor along the bay in Donegal Town on Sunday morning.

World Rally Cars of all eras were parked up in parc fermé waiting for the off.

This was Donegal’s second offering of this brain wave concept by Alan ‘Plum’ Tyndall and Beatty Crawford called the Déjà Vu based in Donegal Town, the first one (based at Jacksons Hotel) was more focused on past winners and their cars for the half century of the Donegal International Rally.

This one, with no small thanks to Donagh Kelly, was one of the finest in preservation and recreation of some of the greatest cars that gave rallying the following it has. There were so many pockets of memories locked in to the different eras of cars parked along the quay side on Sunday morning from the latest in R5’s, right back to the little world beating Mini Cooper S. In there were cars and drivers that made history in their eras, all meeting and greeting with their fans that flocked in and around the starting point on a Sunday morning. 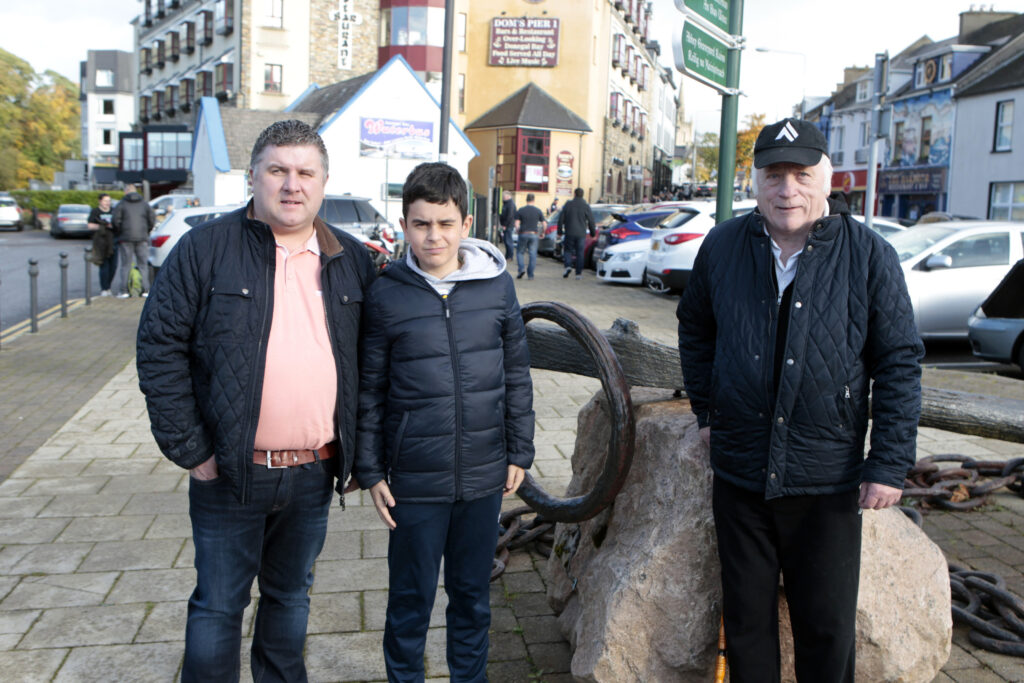 Damian, Shay and Seamus McGettigan at the Deja Vu in Donegal Town

I was glad to see Mac (Seamus McGettigan) making his way to the start with three generations of his family: his son Damien and grandson Shay. Seamus McGettigan was part of the first ever all Donegal team to be outright winners of the Donegal International Rally. In 1983, himself and Dungloe’s Vincent Bonner brought their ex-works Monte Carlo Spec Escort RS 1800 over the finish ramp first at the Ballyraine (Mount Errigal) hotel. 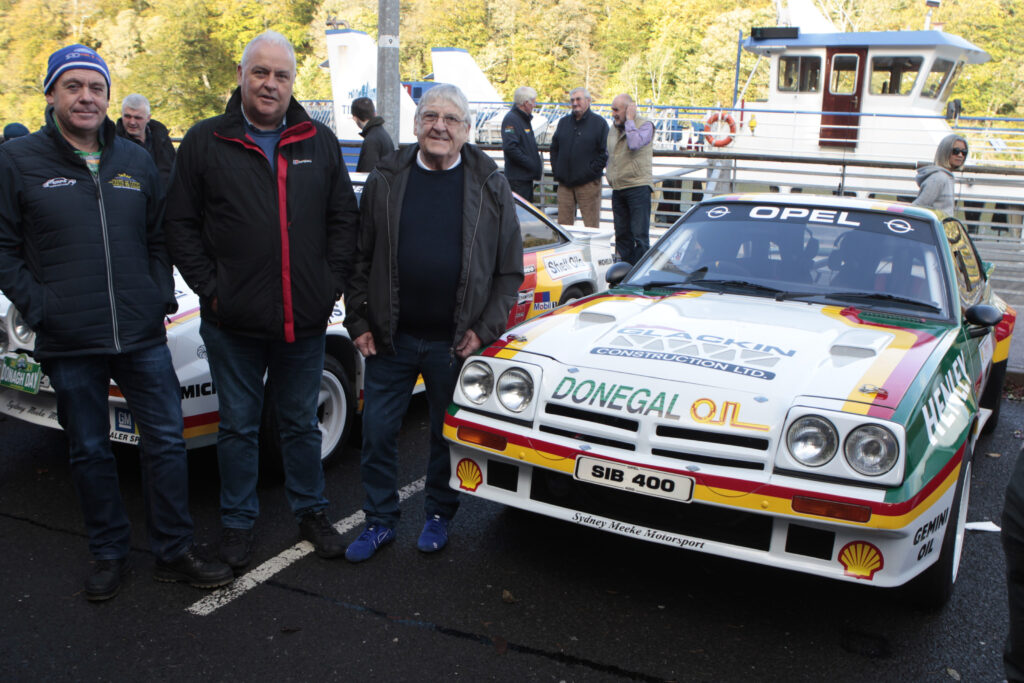 1st Donegal man to win the Donegal Vincent Bonner with Shaun Boyle and Paul Wallace and his Opel Manta.

That crew nearly 40 years ago gave Donegal drivers the belief that it was possible to win the blue ribbon home event. Another man there on Sunday morning milling about the car park was one of the greatest in Rally car preparation, Sydney Meeke. 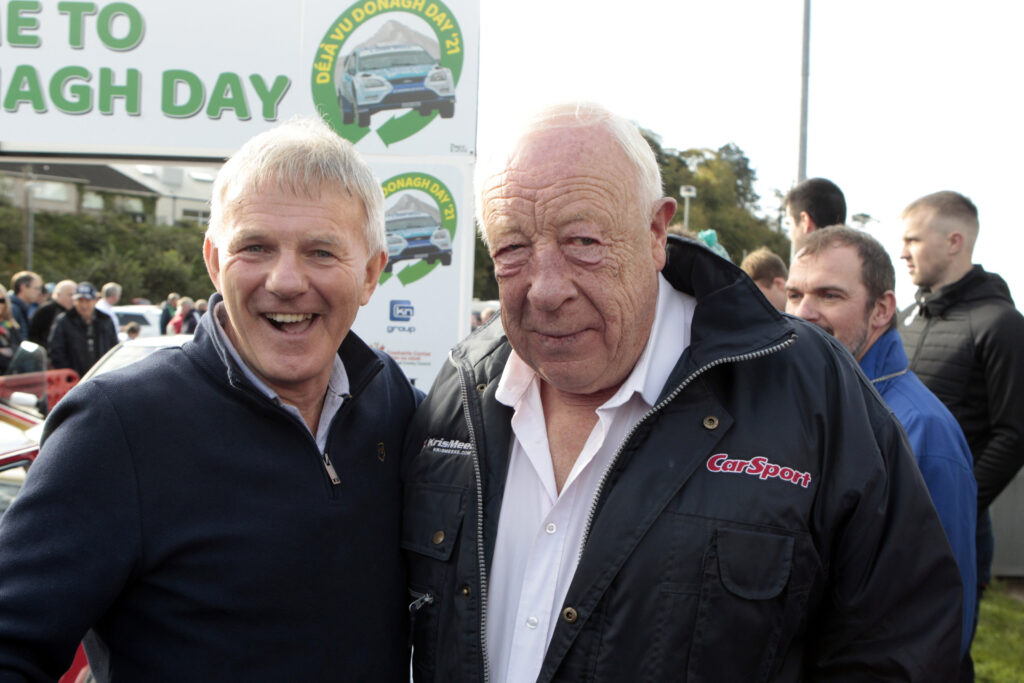 Rory Kennedy with the great Sydney Meeke at the start on Sunday.

He was the man who prepared Vincent Bonner’s Escort for the first big home win in 1983. Seeing him stepping about on Sunday and chatting to different drivers reminded me of the many pictures of the years of both Sydney and the late Bertie Fisher in conversation in a busy service halt. I suppose more of the younger fans will be more familiar with the achievement of Sydney’s son Kris Meeke and his climb to fame on the world rallying stage.

But it was in Donegal that the young Meeke started his rallying career on board the old chase and service barges, helping his father to get the cars over the finish line first. Jimmy McCrea was there in a beautiful Rothmans Subaru Legacy which had his late son Colin and Derek Ringer in the name plate and in another part of the car park one of the old DTV Chevettes in Castrol colours recalled great memories of the battle that Jimmy had with Ari Vatanen in the Rothmans Escort on the Circuit of Ireland in the early eighties. 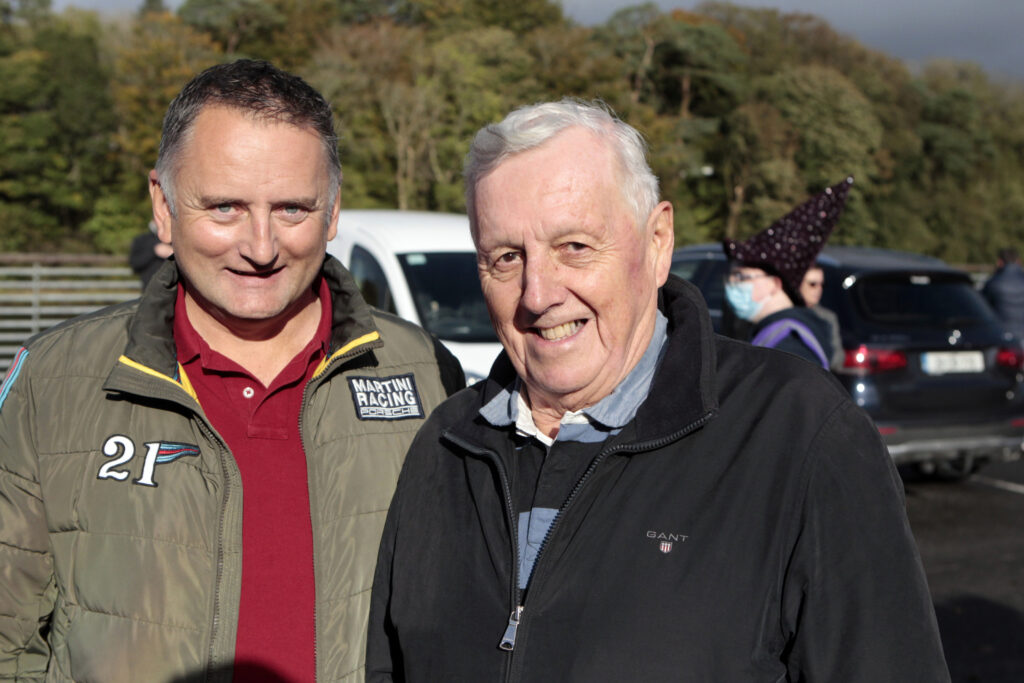 Jimmy McCrea and Trevor Agnew at the start of the Deja vu on Sunday morning.

If I was to pick a car that just did it for me on Sunday it wasn’t the world cars ,beautiful and all as they were. It was a beautifully turned out Avenger in the old works colours of Dealer Team Chrysler complete with the black bonnet. 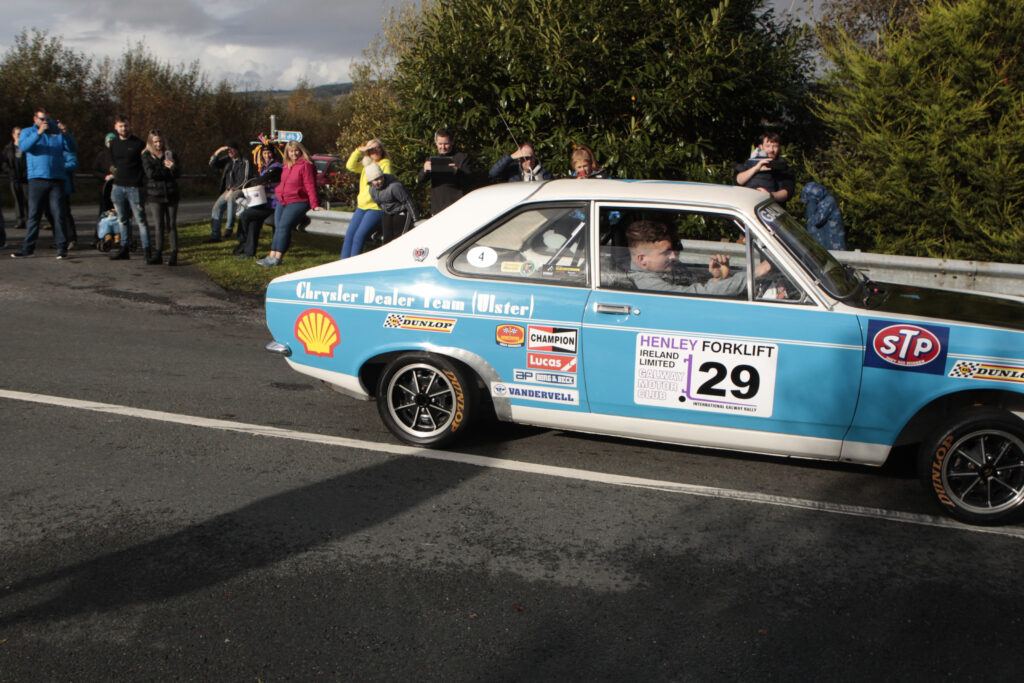 My favourite of the weekend, An Avenger powering its way out of a corner near Lough Eske Photo Brian McDaid

These were the cars that we first saw rallying. Derek Mc Mahon, John Joe Boyce, James Cullen, Eamonn Harvey to name just a few just made these old cars sing on a stage.

On Sunday when the cars headed off the main Barnesmore gap road and headed into what once was the old Lough Eske stage, turning left at a T-junction, a few of the drivers opened the throats on the old twin forty weber’s, and some of them old rear-wheel-drive cars back ends stepped out.

I don’t know who was driving that lovely old Avenger but I did see him feeding in the opposite lock as one of his hands hovered over the wheel to catch the pendulum that is the back end as it started to swing the other way. That was the moment that was the sound 1300, 1600 and bigger all avengers road cars or rally cars when in second gear (if they would stay in it.. they had a habit of popping out of gear in full power), even a limo would drift off the road like that. Boys like James Cullen (also there on Sunday) in his old Dublin registered four door was just a joy to watch, making up one hundred places on his first Donegal seeded at 112 and finishing 11th overall back in 1979. They were the memories that I had of the Donegal rally over the years.

The last word from Saturday was with Letterkenny navigator Rory Kennedy who was sitting on with the Great Paddy Hopkirk who was back in a beautiful Mini Cooper S stirring up memories of one Circuit of Ireland when he crashed out a few miles from Donegal Town on the Lough Eske stage. 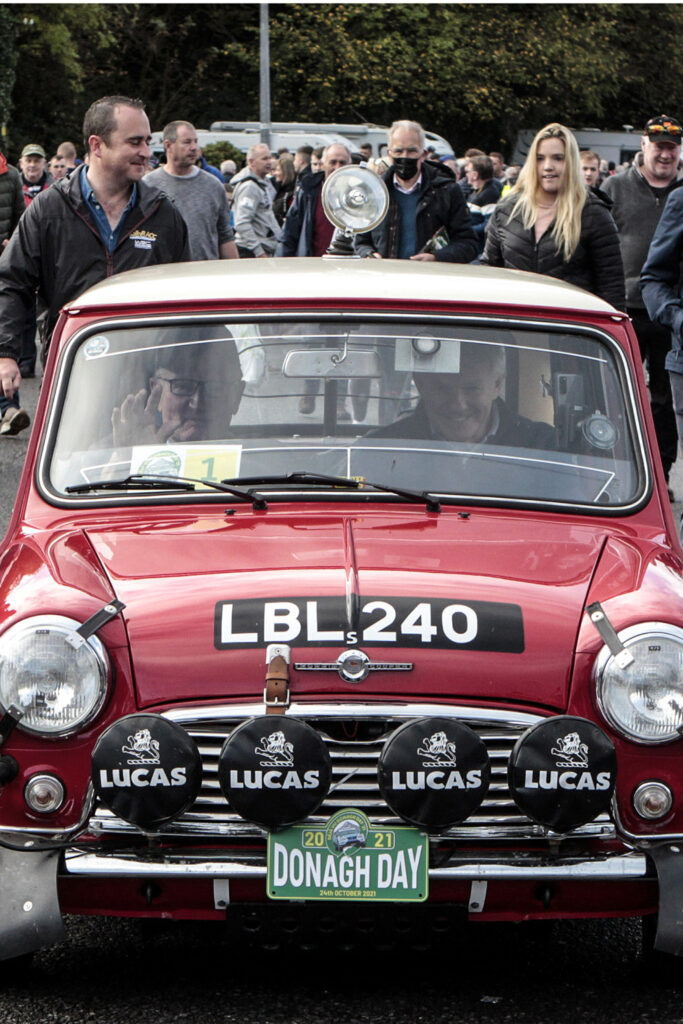 A wave from Paddy Hopkirk as he heads off from the start of the run on Sunday.

I was lucky enough to catch up with two locals, Tommy Gallagher and Brian McGinty, who remember Paddy Hopkirk’s big off in Lough Eske right outside their door in the 60’s when they were children. The car was pulled into their shed where it sat for a few weeks, and both of them would sit out in the works mini and imagine they were driving in the Circuit Of Ireland. 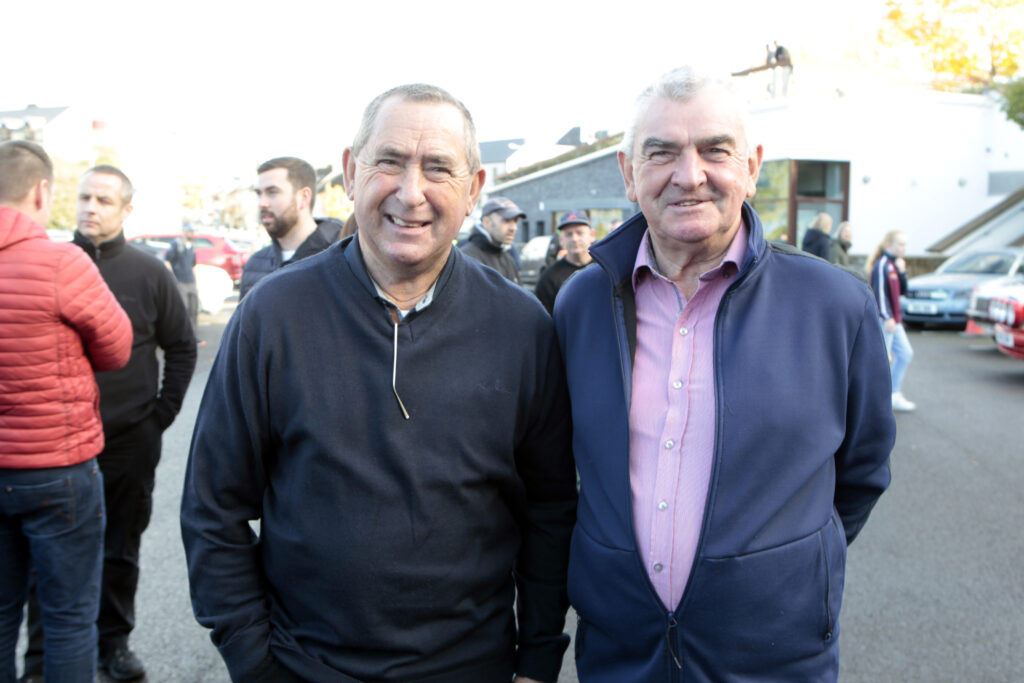 Tommy Gallagher and Brian McGinty who remember Paddy Hopkirk’s big off in Lough Eske right outside their door when they were children. The car was pulled into their shed were it sat for a few weeks, and both of them would sit out in the works mini and imagine they were driving in the Circuit Of Ireland. Photo: Brian McDaid.

And that turned full circle again for me on Sunday afternoon as I spotted the number plate of a famous Escort, that of John Lyons, as it powered it’s way through the junction, a car also prepared by Sydney Meek winning the Castrol Sponsored Donegal Rally in 1981 and 82.

Now beautifully restored, I was later to find out that Gary McElhinney from Donegal Town owns this car and it was him and Shaun Lafferty from the Twin Towns who were out for a spin in it on Sunday. Now just in beautiful red, Gary hoped to transform it to the old Downtown Radio Colours that sparked so many memories as John Lyons won Donegal back to back. When we looked through the pictures of the Escort, Gary spotted his own family standing at the junction and in particular his son Scott in the red rally suit along with his brother Jake, hidden from view as they went through the junction. 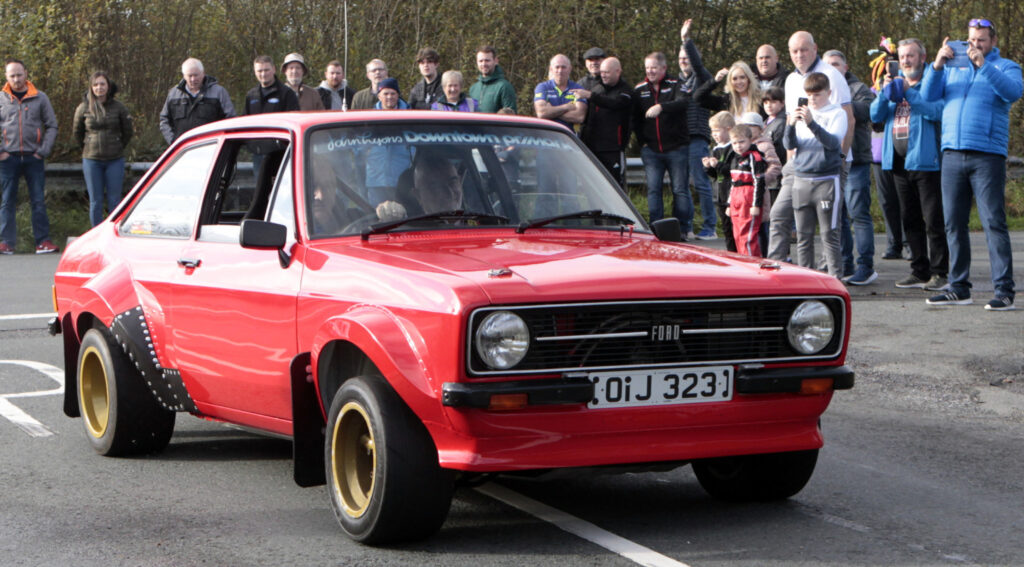 Gary McElhinney letting his ex- John Lyons Escort drift out as his family including his son Scott in the red racs suit in the crowd. Photo Brian McDaid.

For me it was three generations of the McElhinney family that snapped over the years both in the motor trade and in rallying remembering Gary’s late father Ade when he started his own business many years ago, and Gary’s brother in the work overalls right through and his days in the old Magees of Donegal Town Mini 1275 GT. 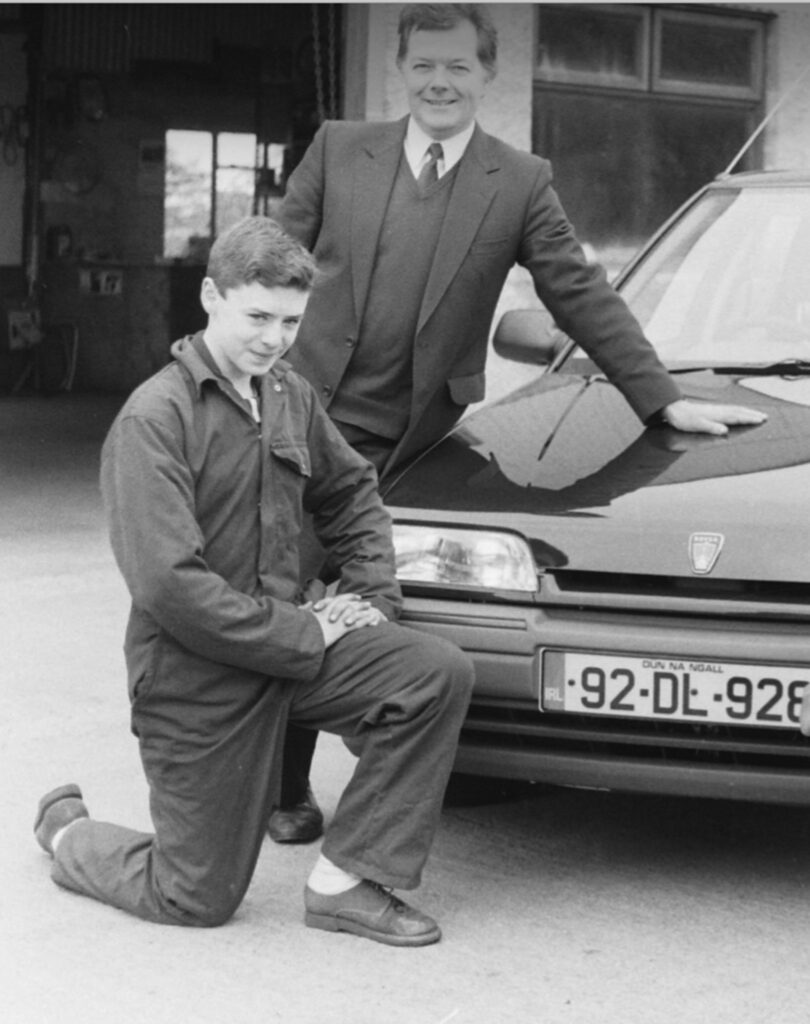 Generations of the Mc Elhinney family from Donegal Town when they opened their own business. Photo Brian McDaid.