A moving film has been created to shine a light on Hereditary Amyloidosis, a genetic condition which is quite prevalent in Donegal.

For first time ever, four Donegal patients have put together this short film to highlight a condition that has been taking the lives of people in the north west Donegal coastline from Rosses, Gweedore, Cloughaneely, Letterkenny and Inishowen for centuries.

The campaign has gained the backing of Hollywood actors from Ireland, including Colin Farrell and Brendan Gleeson.

Hereditary Amyloidosis is often called ‘Donegal Amy’ due to the high incidence in families in the north west.

“There are treatments, the landscape is no longer as bleak and dark as it once was,” says Rosaline Callaghan, a Derry woman whose family is from Burt.

The eye-opening video tells stories of grief and of hope.

Up to very recently there was no cure to this progressive and fatal condition. However today, with the help of our group and supporters, Irish people now have same access to a gene silencing treatment, Patisiran that was previously not available in the Republic of Ireland. The HSE is now rolling out a pathway plan to ensure all Irish Amyloidosis patients get access to this life saving  silencing treatment, Patisiran.

There are some 50,000 Amyloidosis patients affected worldwide with a large section tracing back to Donegal. In UK, USA, Australia, Canada, New Zealand, anywhere our Diaspora has found itself. This has been known for decades but only by a very few in the medical sector.

Typical “red flag” symptoms are explained in this short video. Such as tingling in hands/feet, Carpal Tunnel operation recommendation, heart issues, bowel issues, neuropathy, family history to name a few. You will hear some of these being referred to in this film , by those who have already lost family members to “Donegal Amy”.

It is hoped that the film will educate others about the disease and improve chances of early diagnosis. 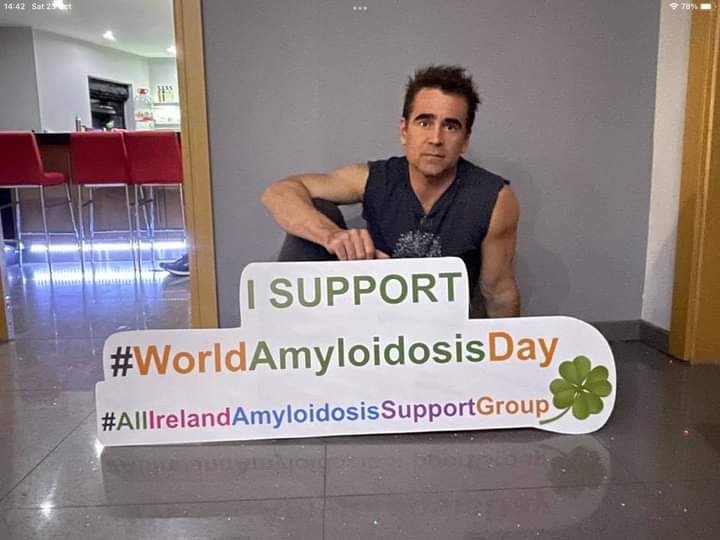 James Green, from Burt, and a member of the Attr Amyloidosis Support Group said: “If you or a family member think you may be affected in any way with Hereditary Amyloidosis, then please contact your doctor straight away and get a genetic test for the condition. It is very straightforward just requires a blood sample.

“There is also a very simple DNA test which can confirm if you carry the Donegal Amy T60A variant gene.”

“Our “All Ireland Amyloidosis Support Group” are also available to help in any way we can. We have an Amy Awareness Facebook page where a lot more info can be got.

“Thanks also to all those who are helping to promote the film. Names include Hollywood Stars Colin Farrell, Brendan Gleeson as well as many other well known household names.”