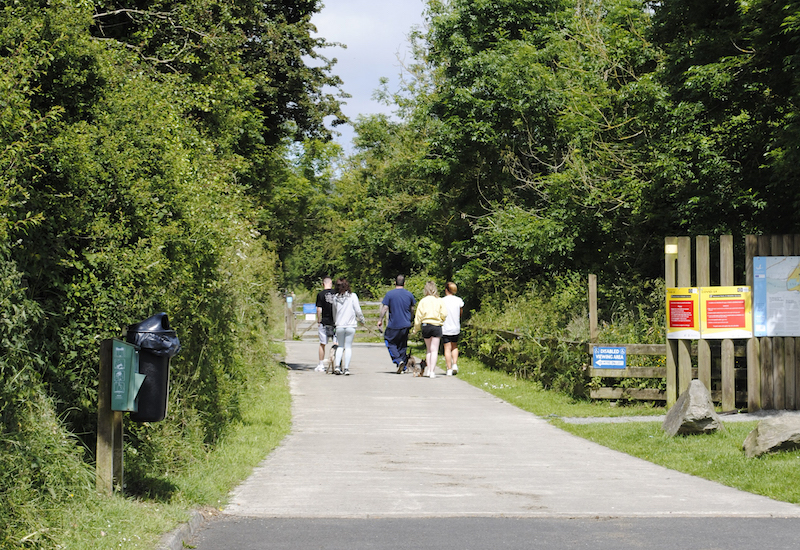 A woman has highlighted a “shameful” volume of litter that is being discarded at one of Inishowen’s most picturesque tourist attractions.

And there are fears that persistent dumping along the Inch Lake walkway could lead to more serious pollution in our local waterways if something isn’t done to stop it.

Anne Loveday, from Iskaheen, has spoken of how a recent walk at Inch was spoiled by the sheer volume of litter on show.

She spotted umpteen instances of littering, with many of the items in danger of being washed into the water.

The dumping is a particular concern in this area due to the large number of wild birds that gather at Inch.

“We should be ashamed that we are still dropping litter, despite the numerous TV programmes about the dangers to wild life,” she says.

Anne says there is no way of knowing whether locals or visitors are causing the problem.

“Whenever I speak with local people about rubbish they always share my concerns.”

“I wish I knew why some people don’t make the connection between littering and pollution, but some have a blind spot about it.”

As to a solution to the problem? Anne thinks a ‘return to sender’ option could be viable.

“One idea could be to post litter back to the manufacturer (without putting a stamp on)! There was a campaign in the Netherlands, where empty plastic milk bottles were sent back to dairies in a bid to reintroduce glass bottles. And it worked!”

“Another idea might be a campaign to sign up households to pledge to keep the road outside their own property clear of litter,” she suggested.

Meanwhile Donegal Mayor Cllr Jack Murray said it is “extremely frustrating” that littering continues to be an issue here.

“Inch Island, in particular, draws thousands of visitors every year and impresses all those as an area of outstanding natural beauty. It is undoubtedly one of the jewels in the crown of our tourism product as the walking routes there are spectacular. They are rightly a source of great pride in the local community.”

“Though awareness and personal responsibility around littering has increased in recent years, it is extremely frustrating to see the scourge of litter continue to be present in our beautiful countryside.”

“It is evident that some people will continue to disregard the local community by selfishly abandoning litter. This is something which we, as councillors, continue to seek additional measures to address,” he explained.

Cllr Murray said the council will continue to crack down on such behaviour but the Local Authority needs the help of local people too.

“To the council’s credit, there have been successful prosecutions in recent years and everyone should be aware that you can be brought before the courts and fined, if caught littering. Our local litter wardens do a huge amount of work in trying to catch those responsible and we will continue to fight for more resources to assist them in doing so.”

“So, I would appeal to everyone not to be so selfish and simply take their litter home. Our Tidy Towns volunteers and council staff do a huge amount of work in making Inishowen look its best. Please don’t make their job harder than it should be,” he urged.