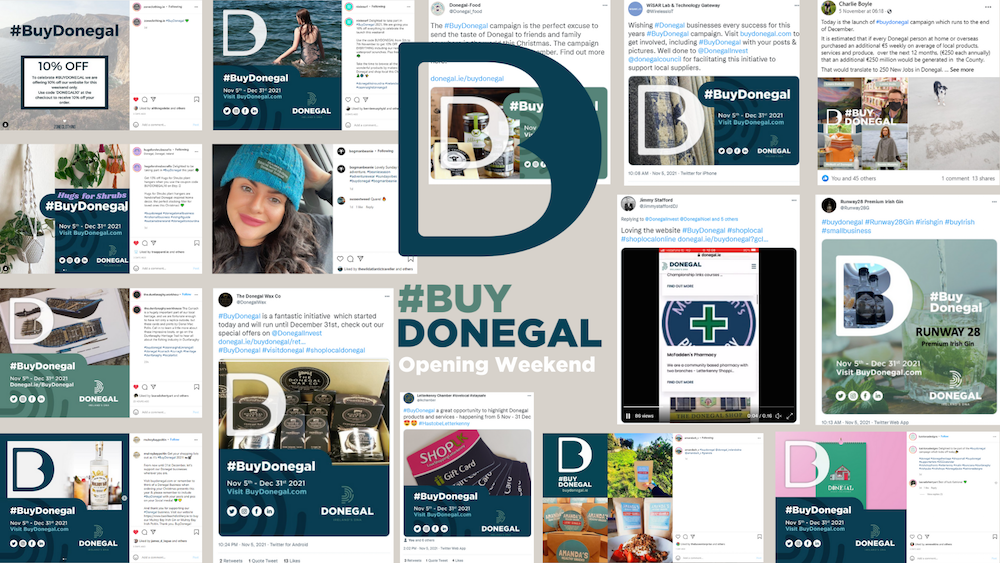 #BuyDonegal gets off to a flyer

More than 300 participating businesses ensured the #BuyDonegal campaign got off to a fantastic start with consumers near and far supporting Donegal businesses over the weekend.

On social media the campaign reached an audience of over 4 million with a constant follow of traffic to the buydonegal.com website from over 40 countries across all corners of the globe.

Some of Donegal’s best loved personalities including Packie Bonner, Mairead Ni Mhaonaigh and Noel Cunningham lent their support to the campaign.

Across all social platforms the #BuyDonegal hashtag featured prominently and in what has been a challenging time for many Donegal businesses the campaign gives a much-needed boost to the Donegal economy.

#BuyDonegal developed by Donegal County Council encourages consumers to buy a Donegal product or service and post on social media with the hashtag #BuyDonegal. A wide range of small and large businesses across the county, from designers & makers, food & drink producers and retailers are involved in showcasing the best of Donegal business.

Donegal County Council Director of Services Garry Martin added “We know the business community in our county are facing lots of challenges right now and this campaign provided a platform for them to showcase their talent and innovation. Our media partners in Donegal play a very important role in spreading the message of #BuyDonegal and we thank them too for their support.”

#BuyDonegal will run right up until the end of December and the people of Donegal near and far can continue to see the wonderful range of business offerings available by visiting buydonegal.com and support the campaign by posting on social media with the hashtag #BuyDonegal or as Gaeilge #CeannaighDúnnanGall.

#BuyDonegal gets off to a flyer was last modified: November 9th, 2021 by Staff Writer
Facebook0Tweet0LinkedIn0Print0