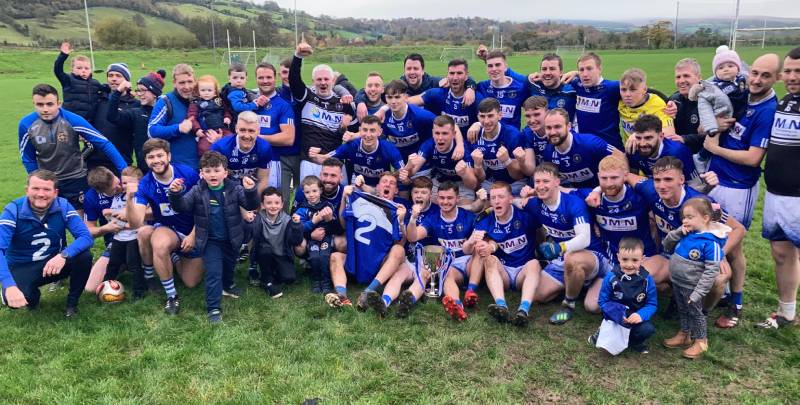 Jason McGee was man of the match as Cloughaneely defeated Dungloe 1-11 to 0-05 in the Intermediate A Senior Championship Final replay in O’Donnell Park.

Cloughaneely started the game on the front foot as Jason McGee opened the scoring from a free before Mark Harley cut in and scored a point with five minutes gone.

Dungloe ‘keeper Danny Rodgers got his side off the mark from a free just outside the edge of the D but McGee scored two more points, one at a tight angle out right, and another free minutes later.

The story of the game continued the same way after the water break as McGee scored his fourth point of the game and his third free.

McGee again did brilliantly to get a shot away with four Dungloe men around him to get his fifth score.

Just before half-time Dungloe got a point back from a massive score by Danny Rodgers who hit his free over the bar from nearly 60 metres. 0-07 to 0-02 at half-time.

Rodgers scored his third free of the game just after half-time but Cloughaneely went up a gear. Harley scored from play and Conor Coyle scored a great point before Blake McGarvey was played in by John Fitzgerald just before the water break and he slotted the ball low past Rodgers to make it 1-09 to 0-03 with Cloughaneely looking out of sight.

Coyle again scored a near identical point to his previous score and Dungloe added a couple of frees through Oisin Bonner and Daniel Ward.

Cloughaneely ended the game with the last point as Cian McFadden could’ve went for a goal but smartly took the easy point as they won 1-11 to 0-05.