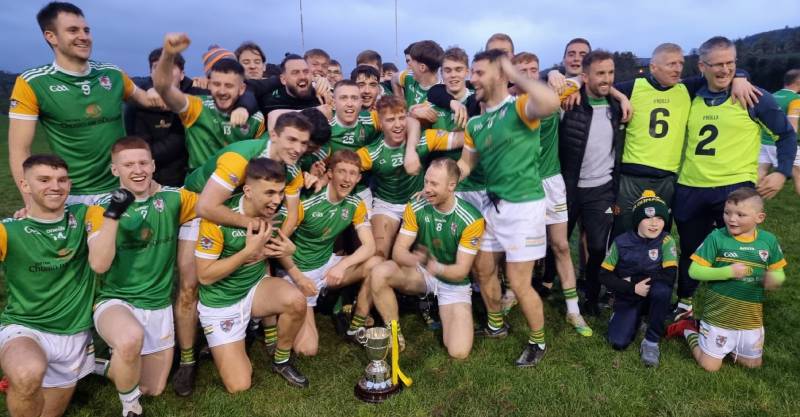 Easy win for Downings in Junior A Final

This was one of the most one-side county finals on record as a totally dominant Downings side simply pulverised a most disappointing Letterkenny Gaels in O’Donnell Park.

This rout gains more context as two of the Gaels points came in the 60th and 61st minutes from wing forward Sean McDonagh who finished with a total of 0-3.

The winners were never troubled at any stage as the losers strangely persisted in playing an ultra- defensive game even when they were well behind.

And Letterkenny Gaels full-forward Conor McBrearty was a most isolated figure up front.

In contrast, Downings brothers Oisin and Shane Boyce dominated midfield and veteran Danny McBride was inspirational on the 40 while full-forward Lorcan Connor was a constant jinking problem for the Gaels.

Downings struck for the crucial goal in the 37th minute when a well-crafted move ended with James Lee McBride’s screaming shot came off the Gaels crossbar and fell for the impressive corner forward Alan Pasoma, who gathered comfortably and rammed the ball to the net.

Pasoma’s powerful strike pushed the winners to a  1-7 to 0-2 lead, but the match was well over by that stage as the Gaels offered very little real resistance.

And the remainder of the match was played at practice ground pace as darkness fell and Downings saw the game home in convincing fashion.

This was a composed and cohesive display from the champions, but it is one game the Gaels will want to forget-although their B team’s victory ensured that there would still be some cause for celebration in the club.

The opening exchanges were uber cagey as both sides probed and prodded like a dentist looking for a cavity.

But it was Downings who signalled a clear intent as Johnny McGroddy use his great pace to charge up field and hit a fine point for the Gaeltacht men in the second minute.

He confidently repeated the dose two minutes later, but his side also managed to hit two wides in two swift sorties.

But they could only score one more point for the rest of the half as their talismanic full-forward Conor McBrearty looked a pretty lonely figure up front.

That point came from the boot of keeper Ryan Graham who cooly landed a 45 for the losers.

But, a few minute before that, Graham pulled off a super double save for the Gaels after he made a great double save from Downings corner forward Eric Roberts in the 12th minute.

But it was very difficult stuff to watch and digest as Danny McBride, Keelan McGroddy and Roberts who added three more points as they eased into a 0-6 to 0-2 lead at the break.

The Gaels badly needed to make some kind of response and the attacked on the restart but they hit three killing wides in a row.

Both sides used a number of subs, but it made no difference to the winner’s total dominance.

Keelan McGroddy added another points and the losers had a brief spark of hope with a great shot from Ciaran Kilfeather who gathered a pass from McBrearty, but his rocketed shot came off the cross bar.

And, that aptly summed up the Gaels day as this mismatch trundled to a finish.