I Lár an Aonaigh, the Irish language magazine series, has reached an important milestone returning for its tenth series on BBC Two Northern Ireland tonight (Monday 15th November) at 10pm.

Presenter and series producer Máire Bhreathnach from Gortahork and her co-host Dáithí Ó Muirí from Armagh have a lot to celebrate, having picked up the TV Personality and Radio Personality Of The Year Awards at Gradaim Chumarsáide an Oireachtais (Irish Language Media Awards).

Over the years the I Lár an Aonaigh team has showcased some of the best home-grown musical talent, featured a myriad of topical stories and had conversations with a diverse mix of special guests.

The series was made for BBC Gaeilge by Below the Radar TV with support from Northern Ireland Screen’s Irish Language Broadcast Fund. 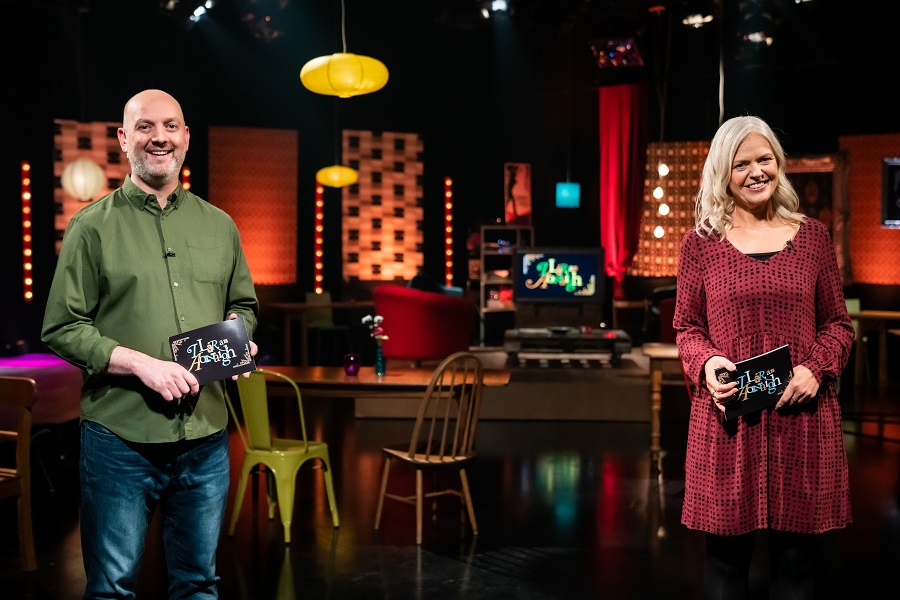 Bhreathnach and Ó Muirí, along with Lynette Fay, Seán Ó Baoill, from Loch an Iúir and Conall Ó Máirtín promise to warm up the long autumn evenings yet again each Monday night with plenty of intimate chat, stories and local musical artists.

To mark the tenth series and bring us into the New Year I Lár an Aonaigh will broadcast a music special on Monday 27th December where Máire and Dáithí will look back at some of the great Irish artists who featured throughout the years, from Picture This, to Honeyfeet, Saint Sister and Breaking Trad.

There will also be music to suit everyone’s taste, from traditional music to blues and soul. I Lár An Aonaigh will hear from sister-act Sisterix, up and coming Armagh musician Ódhran Murphy, new music from Cork musician Jack O’Rourke, Derry based indie-pop artist Reevah, new-age folk musician Claire Sands and pop singer-songwriter Gemma Bradley. Additional tracks recorded by each of the artists will be available to watch online at www.bbc.co.uk/gaeilge or on the BBC Gaeilge Facebook page.

Series Producer Ceara Ní Choinn said: “We are delighted to be bringing back I Lár an Aonaigh once again and to celebrate the outstanding achievement of 10 seasons. This series once again features a wide range of stories, from looking back at the life of musical icon Seán Ó Riada to the history of Drag and exploring the increase of women participating in combat sports. We are also very excited to round the series off with a music special with some of the most memorable musicians down through the years, and there were so many to choose from!”