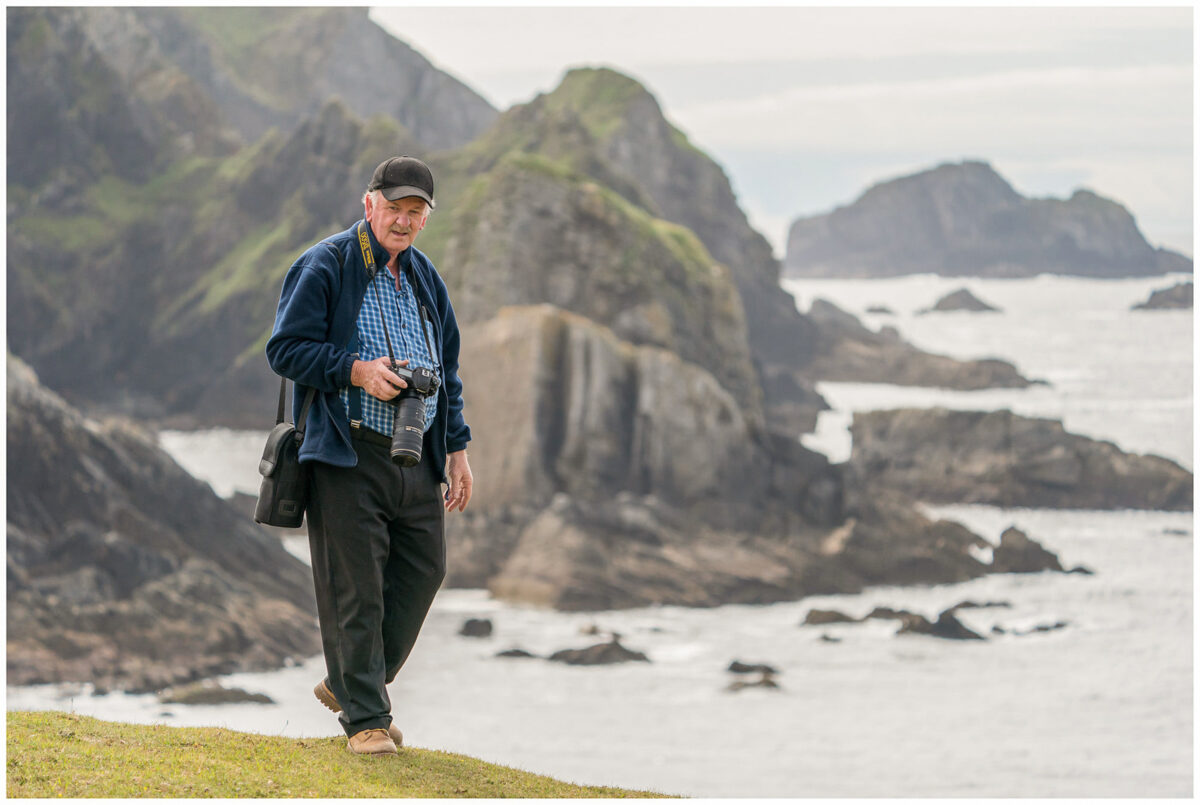 “This is all our Dan’s fault, it was him who gave me a few lessons on the computer in lockdown.”

Since then things haven’t cooled for Tony Nee.

“Is that you or me? I think it is this old computer behind me here, popping away with messages coming in.”

Photographer Tony Nee explains his dilemma as he tries to explain during a conversation over the phone on Monday evening this week.

Dan, as Tony calls his brother, would be better known as Danny who is also a photographer both of whom are originally from the Cullion Road in Letterkenny.

Danny works for the Donegal Sport Partnership suggested that his older brother Tony, now a retired truck driver and a photographer most of his adult life, should digitally archive some of his old negatives and after giving him a grind on social media, mostly Facebook. 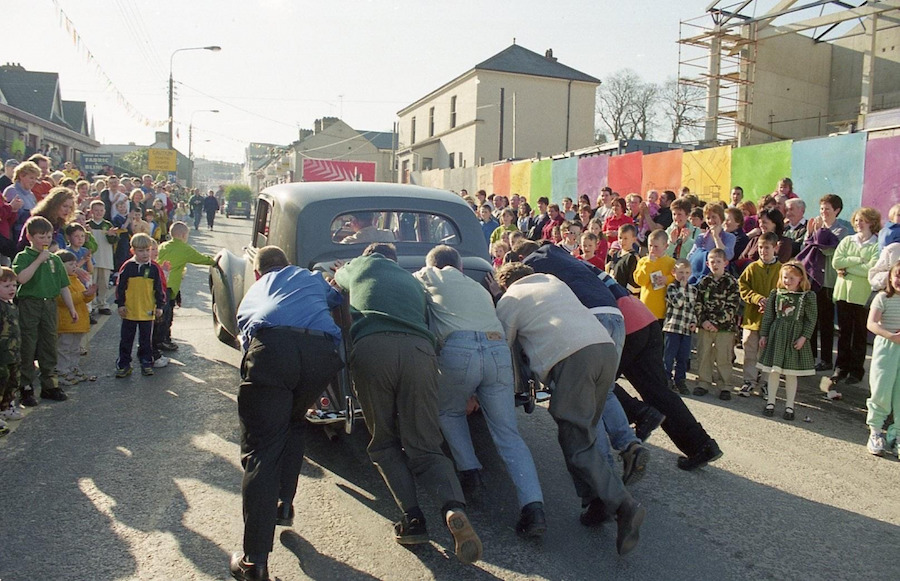 Letterkenny Folk Festival with the An Grianan Theatre in Construction. Photo Tony Nee.

Over the years Tony covered a lot of events in Donegal and being on the road driving a lorry for people like George Boal and later for Bonnar’s Quarries, Tony always carried the camera in the cab of his truck.

It was always loaded up with a roll of the old Ilford HP5 black and white film and and the odd role of colour and Tony captured a very unique style of life in his native Donegal.

Still so surprised at how much interest there is in these old 35 millimetre negatives that he recently scanned onto his computer using an Epson scanner, the phone , texts, messenger, and locals that he meets in Convoy where he now lives are all on to Tony about these old photos. 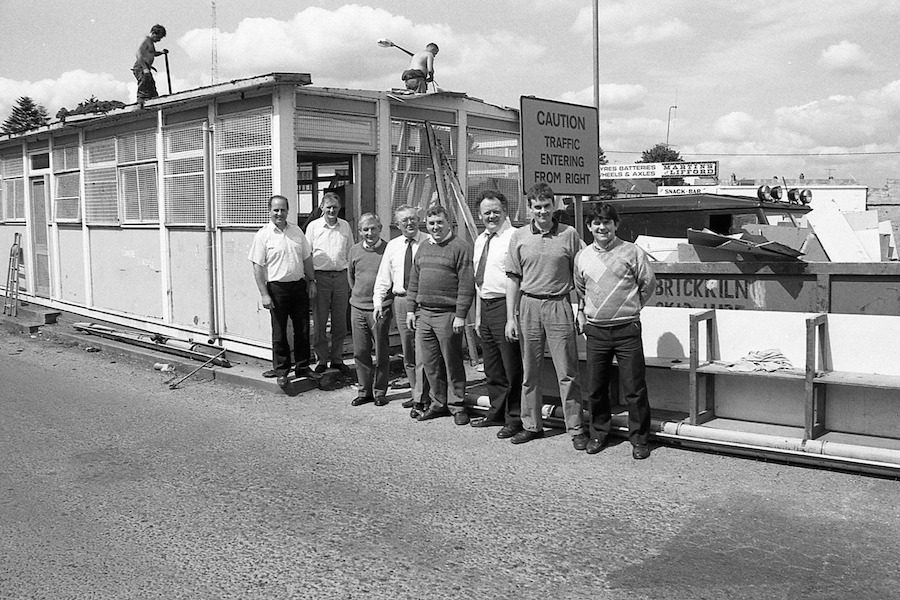 A picture of the staff at customs hut in Lifford before it was demolished. Photo Tony Nee

Tony started out taking photos in the late 70s and early 80s his first camera was a Canon A1 with a motor drive. Tony loved covering the rally and scanning old negatives from the early 80’s reminded him of how much of a challenge it was in the days on manual focus lens to get a car travelling at speed over a bump and have the picture sharp and in focus.

Along with the action Tony also captured the local drivers, navigators , mechanics and supporters some of which have now passed away, local heroes like John Boyle O Manor as he was known and Sammy Fisher.

Bonagee Shows, Letterkenny Folk Festivals, St Patrick Day Parades and all the local events in Convoy, Raphoe and Lifford, all were recorded with the trusty Canon camera, All these events all happened every year and were only really missed as trends changed.

On the road memories of border crossing lines of traffic waiting to get past the ‘camels hump’ in Strabane, all were captured some from the elevated view from the lorry that Tony would be driving at the time. 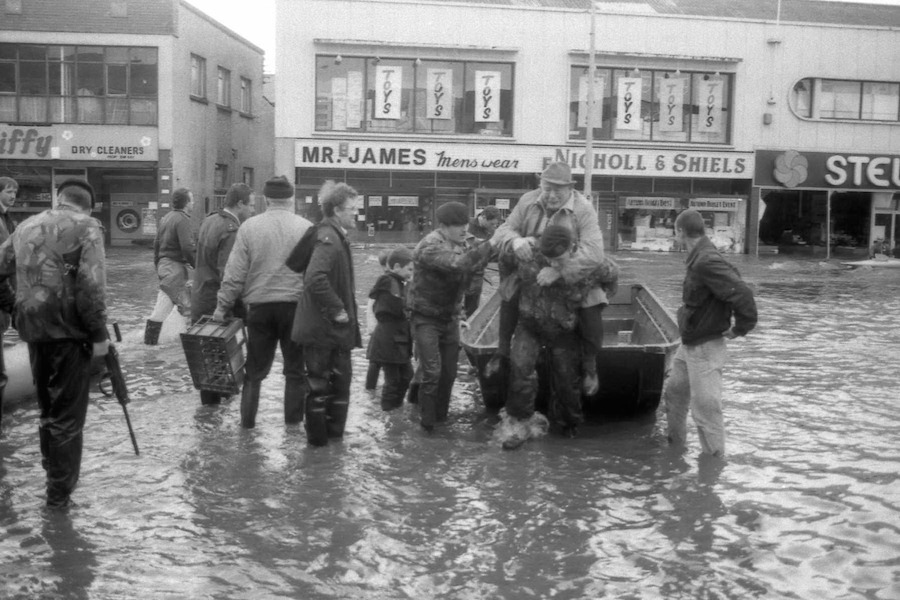 A brillant photo captured by in Strabane of the flooding. Photo Tony Nee.

Tony has a great set of photos that he took the time of the big flood in Strabane, recalling he was a bit short on film when the flood struck, he used some old out of date film and even though the light was very low he still managed to record what it was like for the locals in Strabane when they were transported to safety with everything usable at the time, his photo show members of the British army carrying locals on their back through the floods and even show a armed soldier wading through the water.

Tony, through his work with Bonnar’s quarries, was on hand when local roads were realigned with the camera to record the building of new bridges and roundabouts and has recorded great images some with Muckish on in the backdrop capturing local men like Mickey Mc Gonagle who drove what was known as a grader which shaped the road and it contours on corners right through to the council tarring crews who put the finishing touches on old familiar council lorries. 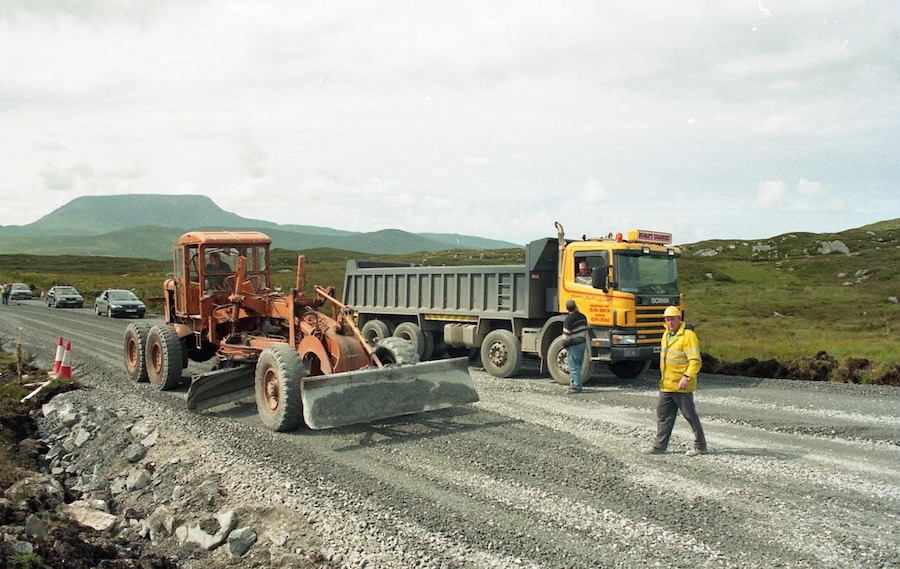 Donegal Co. Council and Bonnar Quarries crew working on the road with Muckish Mountain in the background. Photo Tony Nee.

Dinners dances were a big thing years ago that Tony was asked to cover anything from bowling which he had a great interest in and competed in, right through to farmers dancing, hockey clubs and Donegal County Council staff dinner dancing and retirement functions. 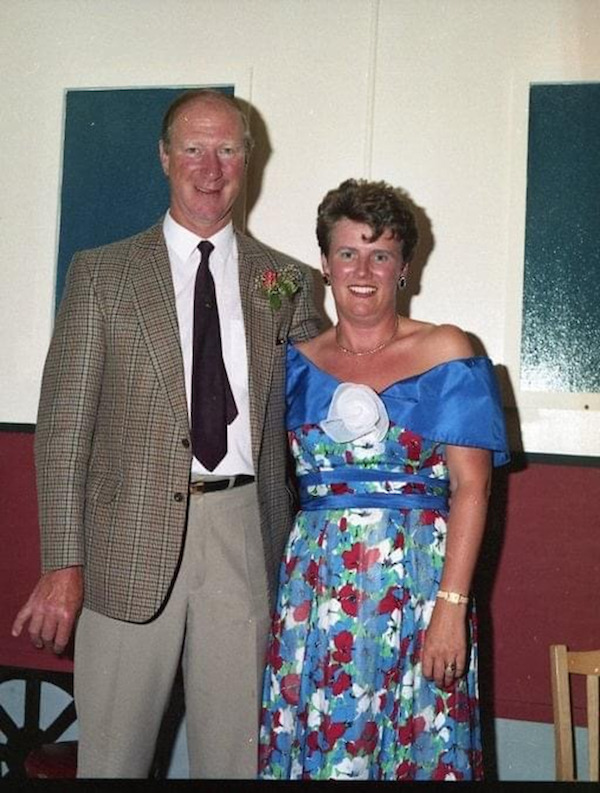 Jack Charlton and Margaret Witherow at the opening of the Castlefinn Festival. Photo Tony Nee

Tony would have thought nothing to cover a dinner dance and head home and then start to develop the old black and white negatives in a darkroom he had in the house, then get the kettle on and get a cuppa tea while waiting for the negatives to dry before printing the pictures using his Durst enlarger, write out captions and have all ready to go the next morning to drop into the Donegal Democrat or Derry People or Donegal People’s Press to met the deadline for that papers edition.

When Tony started out in photography he had great admiration for two local sport photographers Paddy Gallagher and the late Michael O’Donnell. He looked forward every week to getting the Donegal Democrat where both these photographers’ work was used very well in the sports pages. Tony was commissioned by the local papers to cover some of the local jobs in the area recalling covering the the Republic of Ireland soccer manager, Jack Chartons visit to the area, it was one of the jobs that he used the bigger negative film called medium format known in the trade as ‘two and a quarter square negs’ 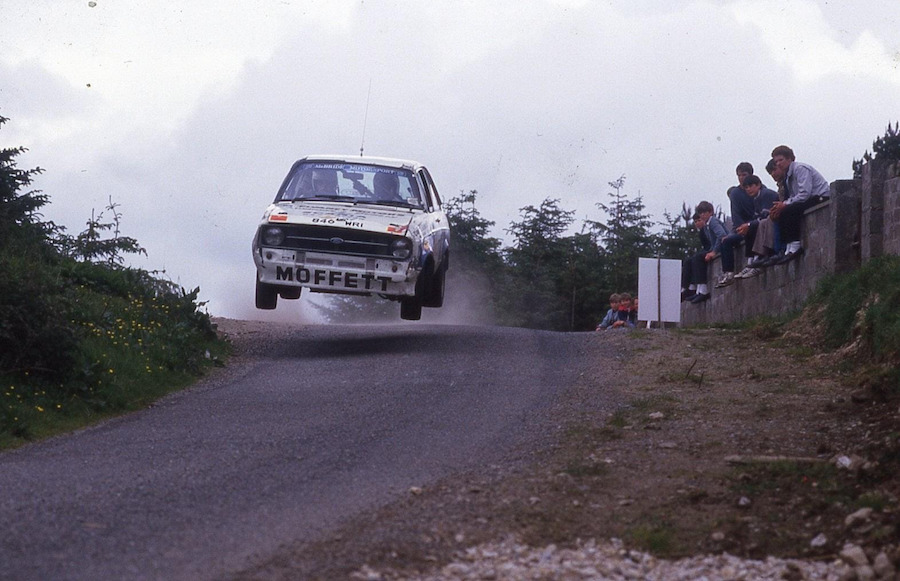 Tony’s old negatives were captured developed printed and now thank to a push on a few computer courses from his brother Dan are scanned to a digital state, old shops great cars (and in my case me with a a full head of hair caught by Tony at the Letterkenny to Sligo bike race) everything and everybody are there.

You didn’t need to be the winner or the top name to be captured by Tony Nee there was alway a few frames left on a 36 roll of film and Tony never wasted them, a fellow workmate, a crowd of wanes, a view that was to be replaced through road work all captured. 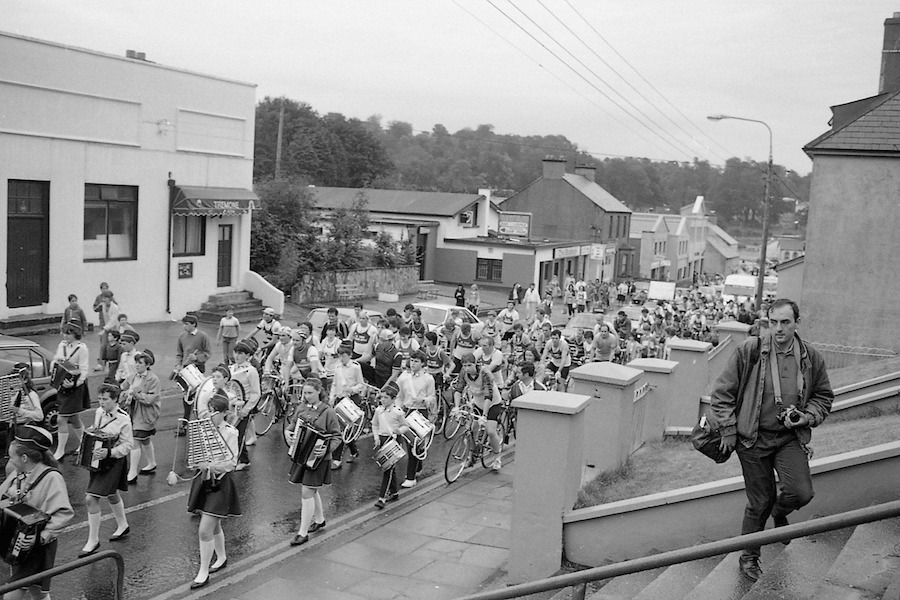 But although Tony has thousand of pictures he had none of himself! For this I had to go to Dan his brother who captured Tony now with a Nikon with a a beautiful part on Donegal in the background.

It’s a rare shot to capture this man on this side of the camera, a man who has captured a great era in Donegal. Thankfully they are here because Tony kept his old negatives, something that may never be possible to do again even with all the technology, in thirty years time with everything on mobile phones 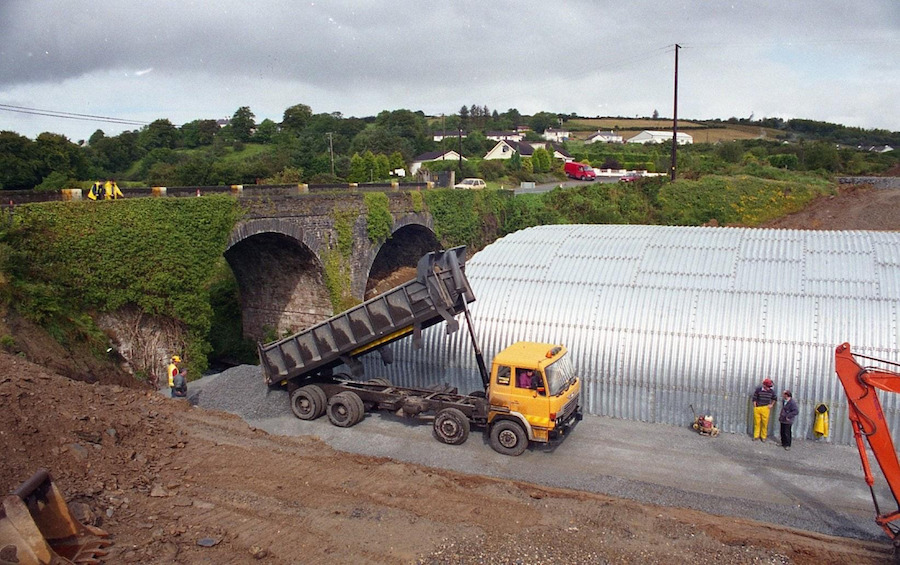 Working on the new bridge in Drumkeen with the old bridge in the background. Photo Tony Nee.

‘Tony’s Times’ captured again on digital for all the world to see was last modified: November 17th, 2021 by Brian McDaid
Facebook0Tweet0LinkedIn0Print0