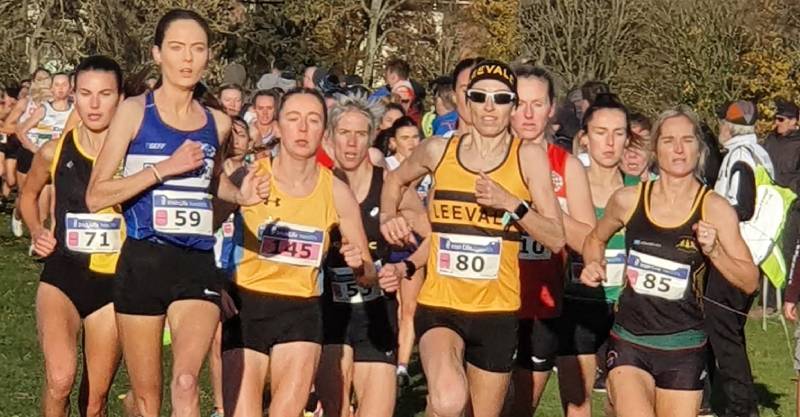 Finn Valley AC women also were crowned u20 Club Champions in a highly successful day for the county.

The outstanding start that had been made to the cross country season meant that Letterkenny AC were always going to have a chance of becoming champions.

However, it was never going to be easy in what was described by club and Irish International coach, Teresa McDaid, as “being the best women’s field in depth and quality that I can recall.”

The victory was achieved by a relatively comfortable margin of 11 points. In the club’s 49th year, this was the club’s first victory in this event, meaning the club will be able to celebrate the half century next year, in the knowledge that Letterkenny AC is among the elite of Irish athletics.

As usual, Annmarie McGlynn, one of Ireland’s most versatile athletes, was at the sharp end of the race. She crossed the line 6th in a highly creditable time of 28.01 for the 8K course. The next LAC runner home was the very consistent Nakita Burke, who was 16th in 28.51. Christine Russell, enjoying an excellent season, clocked 29.42 to finish in 27th position. Natasha Adams, who has had a difficult time with injuries, showed that she has completely recovered; she was 38th in 30.17.

When the sums were done, LAC had 87 points. Co Cork club, Leevale AC, were next with 98 points. Their first counter, Lizzy Lee, was the race winner, which underlined the magnitude of the Letterkenny AC task. It was achieved by excellent packing.

In an event of this nature, every club athlete played a part and the ever improving Niamh Kelly also had a fine run. She played a significant part and finished in 71st place in 32.32. All 5 women did LAC proud on an historic day.
Speaking afterwards, Nakita said, understandably, that the team members were “delighted.” She said the “course was good underfoot and overhead although a little breezy. However, conditions were good for November.”

In an outstanding day for Donegal athletics, the County won the team prize in the Inter-County section. Half of the 6 women team, Annmarie, Nakita and Christine, were 2nd, 3rd and 4th counters for the victorious Donegal team. The first Donegal counter was Finn Valley AC’s Roisin Flanagan, who had an excellent run to finish in 3rd place. Lifford Strabane AC’s Claire McGuigan, was the 5th counter and the victorious Donegal team was completed by another Finn Valley Athlete, Jennifer Elvin. They gave Donegal 116 points, which was 10 less than Dublin, to win the county title.

In the men’s 10K event, there were excellent performances from LAC’s 2 runners, Donal Farren and Conor Gallagher. Both have shown excellent recent form and continued this form on Sunday. Donal has represented both Galway University and Letterkenny AC with distinction. He was the club’s leading runner and finished in 56th place in 33.00. Donal was also a top 20 finisher in the very competitive Under 23 race.

Conor also ran well and was 119th in a very strong field in 35.20. Donal was the first counter on the Donegal team, who were 7th in the Inter-County competition. Conor was the 3rd counter, with the ageless Pauric McKinney being the 4th counter. Evergreen Pauric, now representing Inishowen AC, is a former LAC stalwart. The 2nd counter was Finn Valley AC’s Gerard Gallagher, 5th was Liam Bradley, Inishowen AC, with his teammate Martin Mc Lucas the 6th counter.

The winning county was Dublin, whose 1st counter Hiko Haso Tonosa, was the individual race winner. He also led his club, Dundrum South Dublin, to victory in the Inter-Club race. They had a huge margin of 68 points to spare over their nearest challengers, Clonliffe Harriers.

LAC runner, Paul Caulfield, was first across the line in Saturday morning’s Letterkenny parkrun. His time, 18.14, was the fastest of the 43 parkruns he has done. He had 75 seconds to spare over his nearest challenger. Anthony Farren’s time of 24.24 gave him 1st place in the M55 category. Dara Dunne was the first women home; her time was 25.30. John Doherty, a parkrun regular, finished in 26.07. Paul Lee’s time of 31.48 gave him 4th place in the M50 age group.