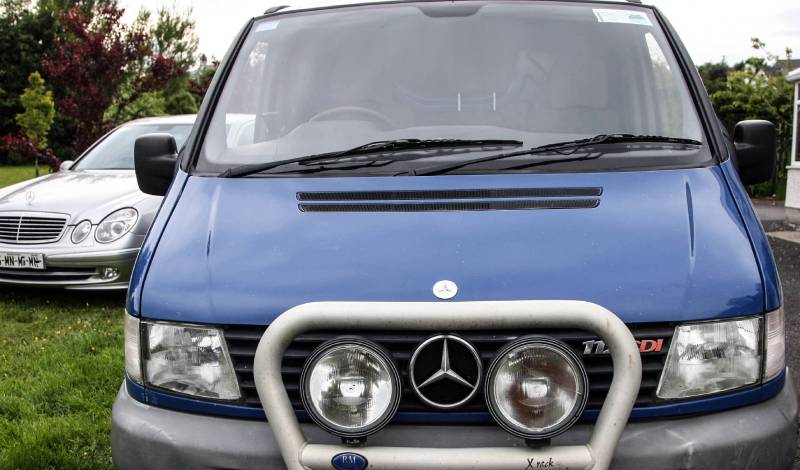 “Ah now, I thought we were going home in the Mercedes”, “this is a Mercedes” I replied as I helped Mark up the small step of the old blue battered ex-builders van. I had a Mercedes car too at the time but it was very low to get in and out of so the van might have looked a little on the rough side, I thought it would be easier on Mark’s multitude of injuries. Today was his  first day to get home since his crash nearly a year ago. 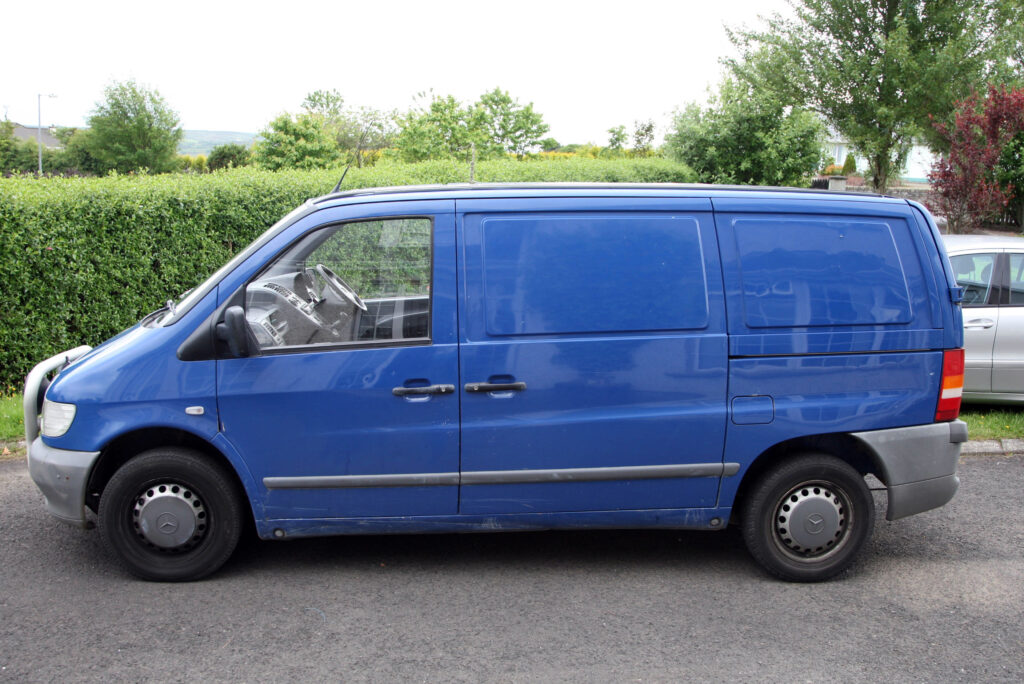 My old Blue Van which was used to transport Mark home from hospital over a decade ago. Photo Brian McDaid.

That day he was rushed from Creeslough by ambulance with a Garda escort.His condition was so poor that the medics at the scene didn’t think he would make it to the hospital. That day I was offered the passenger’s seat in the ambulance where Mark was sitting today, as the crew worked on Mark’s journey to Letterkenny General Hospital. That day he went in the old emergency door at the back of the hospital.

Today he was going out the front door and heading back home to Creeslough. I could see him with the side of my eye bracing himself for a speed ramp in the hospital carpark as I eased the vans wheels very slowly up and over this bump on the road. I knew he was trying to hide either pain or just pure fear of being outside the reaches of medical care that Mark had being in for nearly a year. “Do you want to go down the town a spin?” I suggested as we headed forward to the hospital roundabout.

“Maybe some other day” Mark replied as we turned left and headed for Cresslough.

Every journey in between passing the old hospital gate on the way up the High Road to that day came with advice from those in his care that the odds were stacked against Mark making it in that time in an induced coma as he travelled from the ICU unit in Letterkenny to the Mater Hospital in Dublin. There were a couple of failed attempts to reset the broken bones in his neck because of other issues but they never gave up. And over his long stay in Dublin the team in the Mater Hospital did an amazing job.

Plans were in place to head to the Specialised Rehab unit in Dún Laoghaire but sadly Marks progress health wise didn’t improve enough so a different level of lighter rehab was considered which could be provided in Letterkenny Hospital. I was in the ward the day the ambulance staff transported Mark to Letterkenny Hospital. I thought the sun was blinding him in the bed and went to draw the curtains. “Leave them Brian, I thought I would never see my home town again” he said as he looked out at the spire of the cathedral of St. Eunan’s along the skyline.

What rehab couldn’t do in Dún Laoghaire, being home more than made up for it and the simplest of things that we take for granted lifted the spirits of a slowly recovering body. One day in ICU we had a conversation about cutting hair of all things and Mark said that when he joined the priesthood a haircut was considered a luxury, so they all cut each others hair within the community. It gave me an idea to ask an old school mate of mine, Gerry McGeever, a barber by trade as was his father before him if he would come up and cut Marks hair. After we got the ok from the hospital, Gerry landed up as proud and as well dressed as the top surgeon to cut Mark’s hair, him propped up in the hospital bed in a ward within the ICU ward on the very top floor of Letterkenny General.

The old diesel van was putting out a bit of black smoke as it pulled up the hill at the log cabin before Muckish Mountain came into view, its sight distracted Mark of his fear for a few minutes. “Will you wheel in past Eddie and Madge Carrs house to we say hello?” Mark asked as he got nearer to Creeslough. 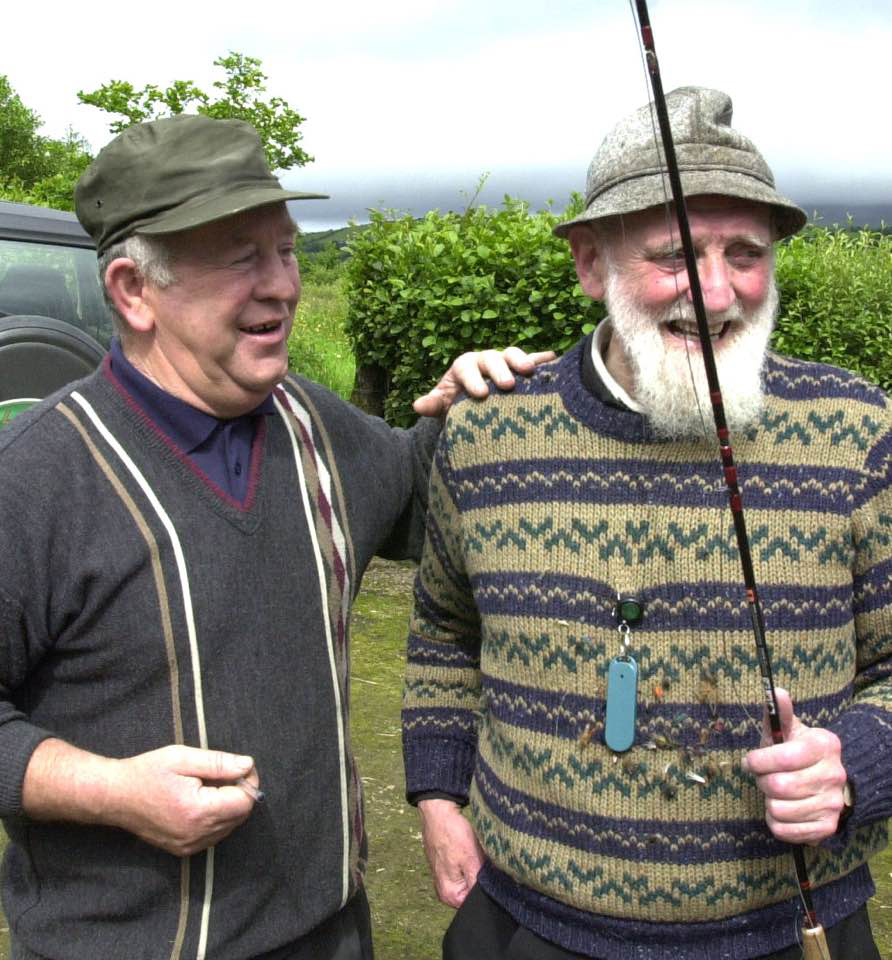 Fr. Mark and one of his best friends Eddie Carr pictured out for a days fishing on Lough Fern. Photo Brian McDaid.

The old Wicklow registered blue van didn’t get the reception that Mark imagined he would get arriving in the street of his closest friends but once they realised it was Mark they were amazed. “Did they send you out in your pyjamas, Fr. Mark”,  Madge suggested, “that’s right” Mark replied “we’ll call in for tea some other day when I’m better dressed” Mark replied, trying to cover his nervousness of being out on the road again.

We passed the spot where Mark had the accident on the Ards side of the old pillars that carried the old Lough Swilly train to Burtonport.

I could see the scrape mark on the road that his car made on the tar in the collision but said nothing. We went up the middle road which he always told me was the quickest way into Ards and nursed the van and his body over the sharp speed ramps along the wall garden. He was very focused on getting to what was his home off and on for the biggest part of his life.

It was waiting for a set of Christmas lights to light up in what was his old home at the foot of the town in Lettetkenny this week that took me on a memory of Mark looking out through the frosted window, which is now in the middle of the gallery, was once the back window of the original building. Christmas lights do this to me every year driving me back the ways to days gone by and if they are meant to make you very joyful, when I first see them lighting up especially somewhere like an old family home. 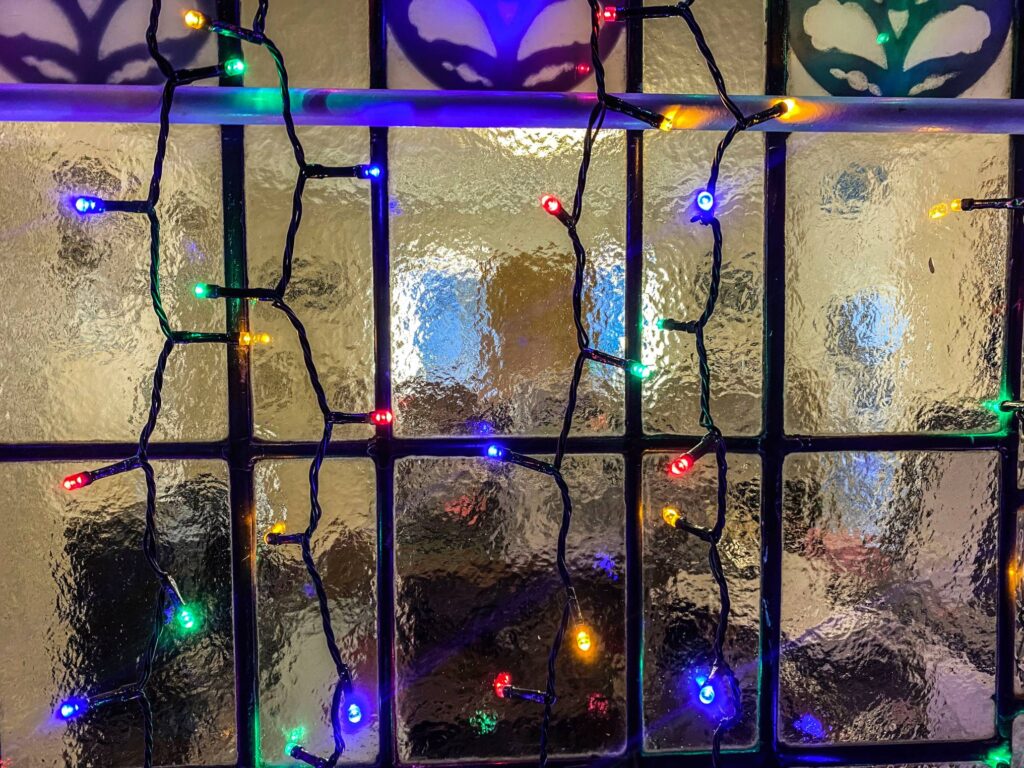 Every Christmas with the help of Bida and Miah, Fr. Mark celebrated mass in this house on the anniversary of my mother passing. He was also the person that sat us down as four very young children and told us that our mother had gone to heaven. I still remember that day not wanting to look into Marks eyes because then I knew it would be true for sure. So instead I looked at Christmas lights on the tree that had been switched off that morning hoping that they would come back on again and everything would be ok.

Mark finally made it back to Creeslough back to his community and back to his home. His health reached a high point on the few Sundays that he was able to celebrate mass from his wheelchair on the altar in Ards. Christmas lights through a frosted window remind me of Mark as we always called him as our uncle and my mothers brother and all of them who went before me. I need to give this time every Christmas before I allow Christmas to be what its suppose to be.

In happier times Mark would as if by magic bring out four bars of chocolate for us for boys out of his long hood in his habit and later years I seen him bring out a bottle of wine from his hood when he called to visit his sister Rosaleen. 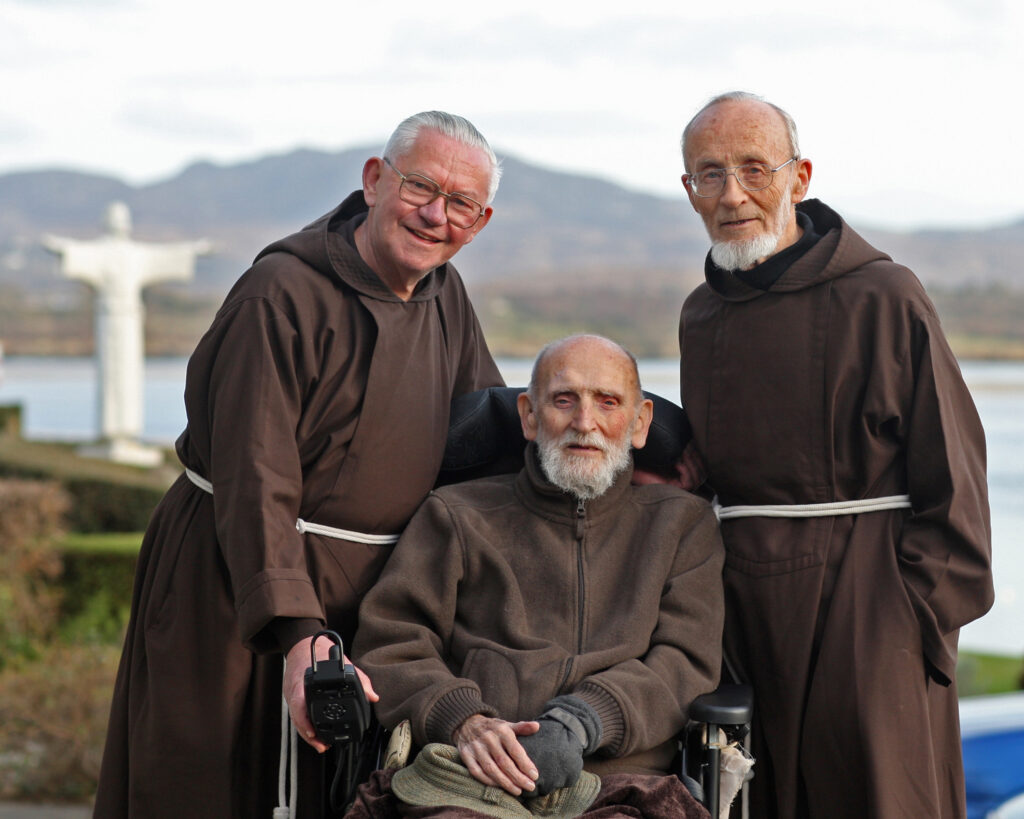 180 years in the Priesthood. Fr Eustas, Fr Mark and Fr Donatus pictured at their retreat in Ards in 2010 The all celebrate their 60th anniversary on the feast of St Francis in October this year but will be in different parts of the world Fr Eustas is based in Dublin Fr Mark is in Ards and Fr. Donatus is based in Zambia. The three entered the priest 60 years ago in Cork and were in Ards before their ordination at St Eunans Catherdal in Letterkenny. Photo Brian mc Daid

The picture included here is celebrating 180 years in the priesthood. Fr. Eustas, Fr. Mark and Fr. Donatus pictured at their retreat in Ards  They will all celebrate their 60th anniversary on the feast of St. Francis in October that year but will be in different parts of the world. Fr. Eustas is based in Dublin, Fr. Mark is in Ards and Fr. Donatus is based in Zambia. The three entered the priests 60 years ago in Cork and were in Ards before their ordination at St. Eunans Cathedral  in Letterkenny.