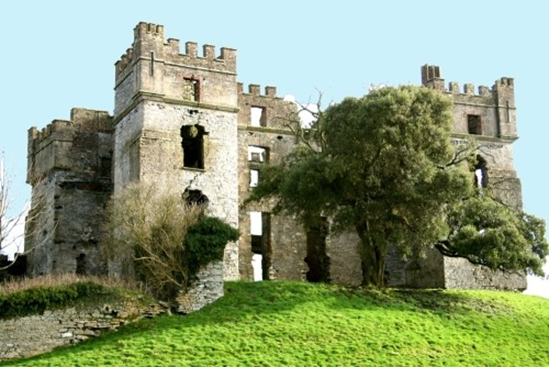 Donegal building among An Taisce’s Top Ten “most at risk”

A well-known Donegal landmark is among one of ten buildings which An Taisce has said are the country’s Top 10 Most-at-Risk Buildings.

The Bishop’s Palace in Raphoe dates back to the 1630s.

These are all buildings of importance, both intrinsically and to the heritage of their local areas; buildings that lie vacant and are in such a state of disrepair that they may be dangerous or have no identifiable new use.

These buildings could be lost to future generations unless direct action is now taken to preserve them.

An Taisce’s Head of Advocacy Ian Lumley said, “We are seeing widespread vacancy and dereliction of heritage buildings in Irish towns and cities. The House by the Churchyard in Chapelizod which was on our 2020 top ten buildings at risk list is one example.

“The one-time home of one of Ireland’s most iconic horror writers Sheridan Le Fanu, and a fine example of an 18th century house is being left to deteriorate. Le Fanu is now part of an equally scary story as his famed novel, The House by the Churchyard, that of dereliction and vacancy”.

Mr. Lumley continued, “There is so much opportunity in restoration and conservation. In these pandemic times, we have seen the value of community and a growing appreciation for spending time and getting to know our local areas.

“Together with a homeless crisis that has not gone away, offer a compelling argument to save and repurpose many of the buildings listed below and many more for either community or residential use. Restoring and repurposing heritage buildings is also far more sustainable than allowing them to deteriorate, bulldozing them, and constructing new developments from scratch”.

The Bishop’s Palace is a roofless shell. Unfortunately, none of the original fabric remains other than the external walls. But worryingly, it is now suffering from structural problems that could lead to a full or partial collapse.

Situated on a prominent hilltop position, the Bishop’s Palace still remains an arresting sight. The former Church of Ireland bishop’s residence, also known as Raphoe Castle, dates back to the 1630s and retains much of its early imposing character and form. Its brooding presence, to the south-east of the centre of Raphoe, can be seen from a number of different locations around the town.

The fortified mansion was built by Bishop John Leslie but, soon after its completion, came under attack during the 1641 Rebellion. It was a target again in 1653, this time by Cromwell’s forces. In 1689, it was damaged in a raid by supporters of King James II, and it also withstood an attack by the United Irishmen in 1798. Ironically, despite resisting so many attempted assaults, it was an ordinary fire that was to trigger its end; the palace was deliberately set ablaze in 1838 by a man whose sole motivation seems to have been to obtain a cheaper lease of the demesne by removing the extant residence on it.

Incredibly, it remains today an imposing and impressive ruin and stands as one of the most striking and important castles in Donegal.

The ‘Top 10 Most-at-Risk’ list is compiled and updated by An Taisce annually.

In alphabetical order, the ten buildings deemed most at risk in 2021 are:

The House by the Churchyard, Chapelizod, Dublin

Donegal building among An Taisce’s Top Ten “most at risk” was last modified: November 25th, 2021 by Staff Writer
Facebook0Tweet0LinkedIn0Print0