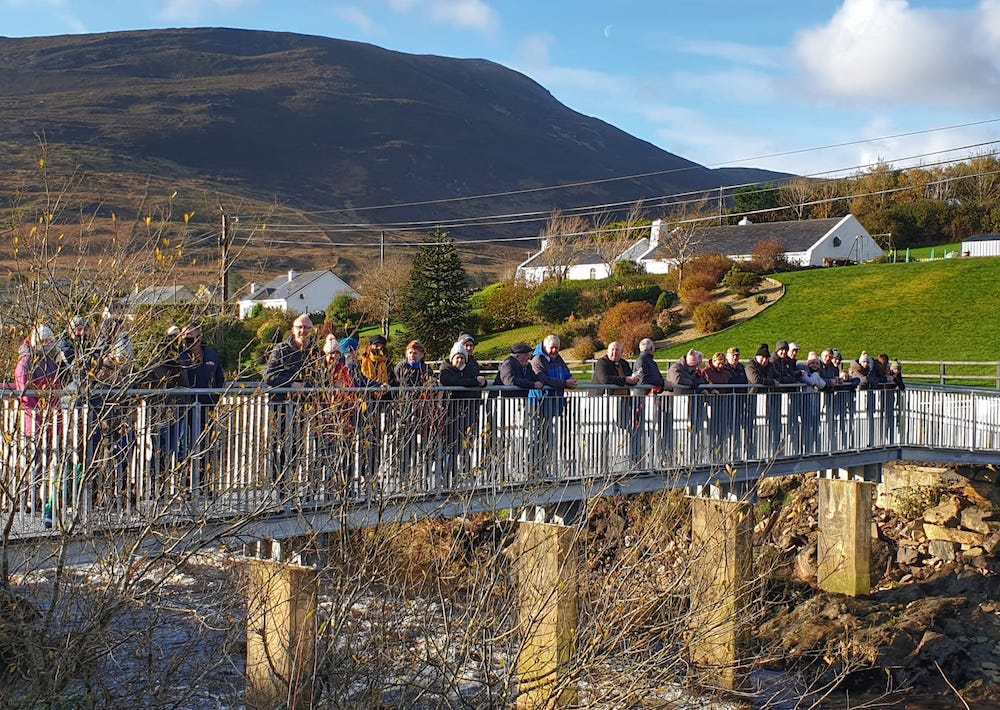 The previous structure was destroyed by floods during Storm Lorenzo in 2019.

The inhabitants of Carrick woke to see the largest flood in the Glen River since 1939.

Landslides, flooded fields and roads were part of the devastation.

But it was the destruction of the Angler’s Footbridge, a treasured community amenity, that had the greatest long-term impact on the village and surrounding community.

The site of the destroyed deck and railings that morning brought a sense of community loss. 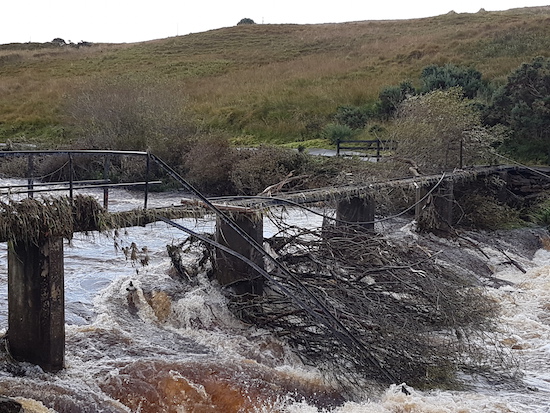 It was built over 30 years ago by the Northwest Fishery Board for the Slieve League Angler’s Association (SLAA) under the supervision of Gerry McCafferty.

The number of walkers that enjoyed this amenity every day far exceeded what would normally be expected in a small rural community. 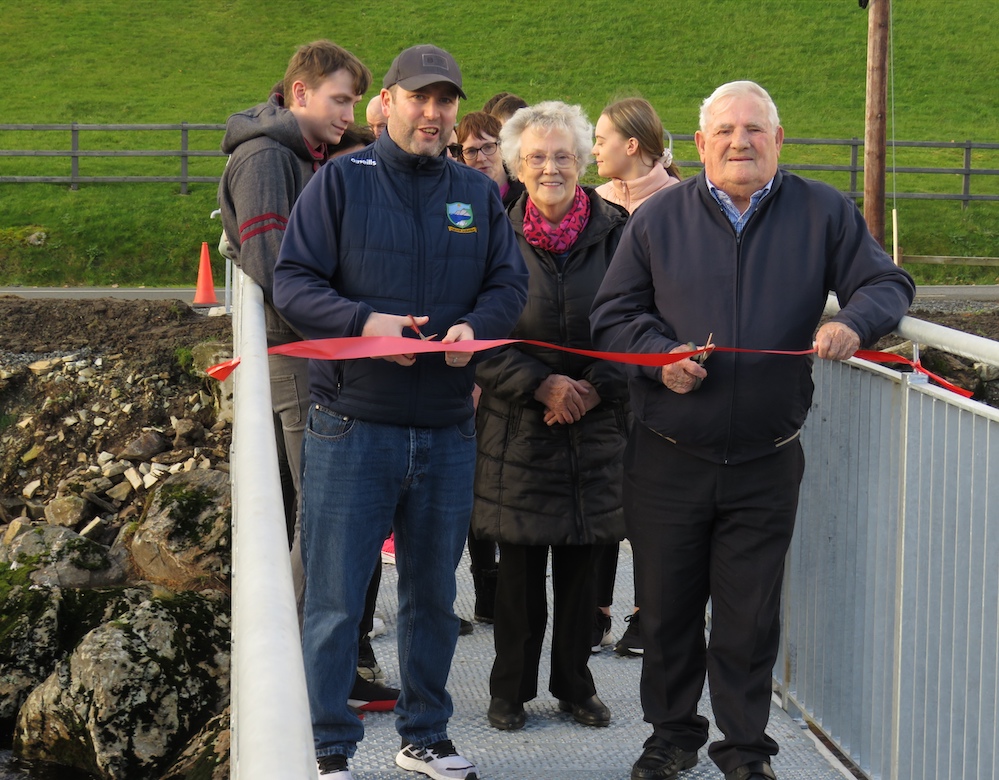 Coiste Forbartha na Carraige with the support of adjoining landowners, met the Slieve League Angler’s Association and undertook to fundraise and project manage the design and construction of a new footbridge that would also accommodate both baby buggies and wheelchairs.

Councillor Niamh Kennedy got the fundraising off the ground by securing €2,500 from the County Council’s Development Fund Initiative for preparatory work.

Both Cllr. Noel Jordan and Cllr. Kennedy supported the committee with donations through their Members Development Fund. 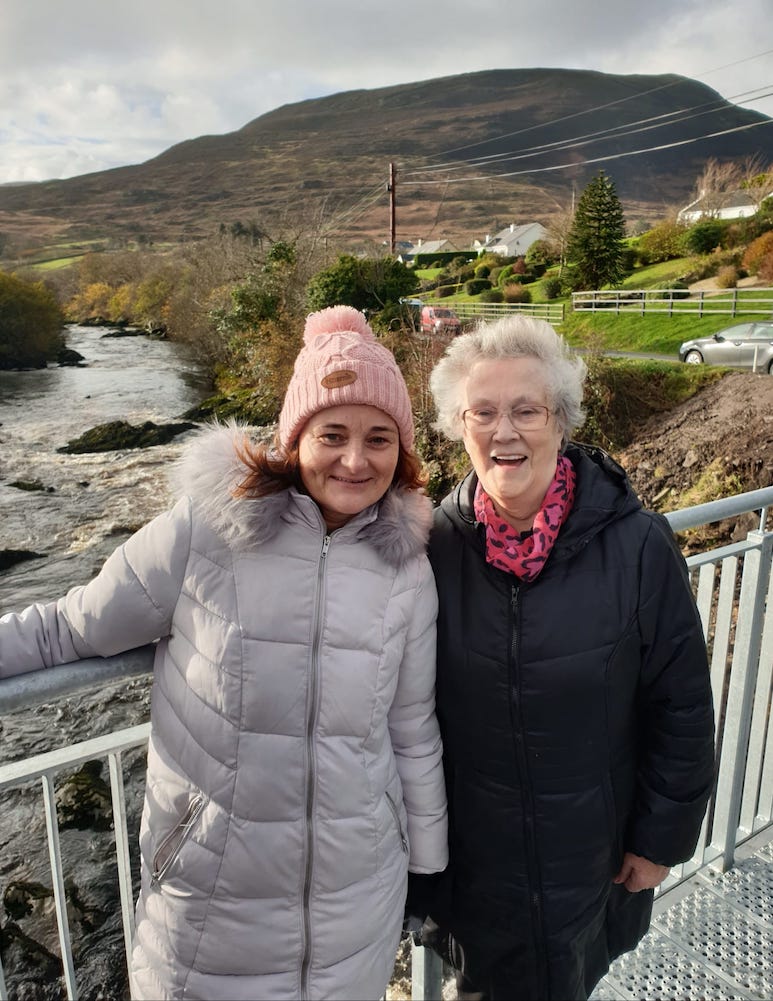 However, the reconstruction of this Community Footbridge was truly a community effort.

Designed by Brian O’Byrne, from Malinbeg in Glen, and constructed by local contractors TAM Ltd from Crove, nobody could complain the commute to work was too long!

In addition to funds raised through Christmas, Easter and the main Summer Draw money came in from unexpected sources.

The Carrick Development committee got a major boost before the main fundraising drive was underway when Derek Williamson and Victor Richards were off on a fundraising cycle from Donegal to Dublin sponsored by Ireland by Bike.

Next, the Brew in Thru coffee shop recruited Paul Mescal of Normal People fame to donate a signed Donegal GAA jersey which they raffled for the project.

Not to be outdone by the coffee people, food vendor Póg mo Lóin and the legendary Minertones combined to organise a charity car wash and outdoor gig raising further funds. 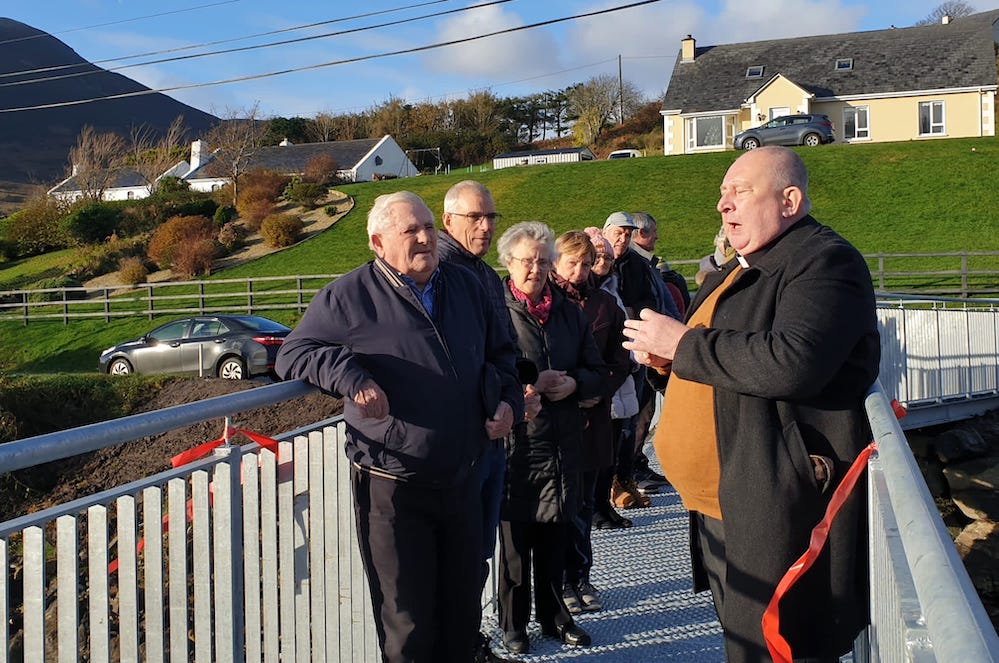 The official opening of the new bridge was performed at noon today by George Doherty and John Cunningham.

Chairman Seamus McGinley said “the community support was fantastic. The local people really got behind the fundraisers, you would go to people hoping to sell one or two tickets and come out with 3 to 5 sold.  It was also obvious too that the local engineer and contractors cut their prices to minimum for us and we want to acknowledge this”.

“We would also like to thank the staff of Donegal County Council’s Planning and Village Renewal sections for their guidance.”

Fr. Denis Quinn who blessed the footbridge and thanked the committee for bringing the project to fruition  about how its construction  reflected a great community spirit to get things done.

The Community Footbridge will now be returned to the care of the Slieve League Anglers Association.