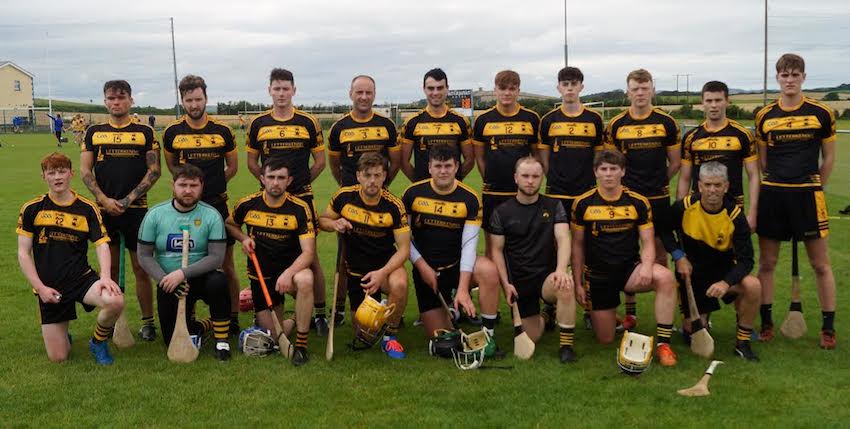 A physically powerful Craobh Rua from south Armagh steamrolled over the surprisingly tepid challenge of a strangely off- colour St Eunan’s side in the Athletic Grounds Armagh on Saturday.

It was just one of those nights for the Donegal county champions who were out muscled and generally outhurled by a fired up Craobh Rua side who used their physical advantage to the maximum effect.

And they had a real matchwinner in Jarly Og Burns who was a late sub and cracked home two killer goals in the opening half which broke Letterkenny hearts.

The dual star was a major factor in this shock result.

For Eunan’s Daire O’Maoileidigh and co tried hard up front but they looked tentative, hit a number of wides and were always under the pressure from the focused and fired up Craobh Rua

The drama began even before the referee had a chance to throw in the ball when we had what one wag called “an Irish version of the Haka with sticks”.

Seven players got involved in a bit of heavy wrestling and a rolling maul erupted in the centre of the field as tempers flared on the eve of battle.

Referee Kevin Parke le the warriors have their blow out and then gave Sean McVeigh, Patrick Garvey and Oisin O’Hare were all given yellow cards.

The ref handed out a total of seven yellow cards.

But the ri ra and ruaille buille seemed to unsettle Eunan’s against a physically powerful and fired up Craobh Rua side who took command from the start.

And their classy corner forward Conor McKevitt set the tone for what was to unfold by hitting a superb point from the right hand sideline after just three minutes.

Eunan’s seemed to be still stunned after the pre match jigs and reels as Tiarnan O’Hare made it 0-2 to 0-0 after six minutes.

Eunan’s did have a slim chance of a goal a minute before that and he drew a fine save from Derry born keeper Joe McEldowney.

And then late sub Jarly Og Burns struck for the first of two killer goals in the 7th minute.

A long ball in seemed to unhinge the Eunan’s defence and the son of ex GAA presidential candidate Jarlath Burns showed ice in the veins as he cooly slammed the sliotar to the Letterkenny net.

Burn’s brilliant strike put the powerful winners into a 1-3 to 0-2 lead after Daire O’Maoieidigh and Kevin Kealy got Eunan’s off the mark.

Craobh Rua marksman Tiarnan O’Hare extended their lead from a free with O’Maoileidigh replied for Eunan’s.

They did have a valid claim for a penalty turned down when centre forward Kevin Kealy was hauled down in the square but referee Kevin Parke’s whistle stayed quiet.

Eunan’s could only manage one more point from play as the winners deservedly led by 2-8 to 0-4 at the break.

And the second hammer blow was also struck by the rampant Burns in the 23rd minute.

Tiarnan O’Rourke badly mishit a close range free and somehow the ball fell to Burns who gleefully hammered the ball to the net and that was the real killer blow for Letterkenny.

The opening quarter of the second half was a turgid affair with both sides tacking on two points.

But it wasn’t until the final ten minutes that Eunan’s began to assert themselves.

Conor O’Grady came into the match in this period and landed a point from a free.

O’Maoileidigh and O’Hare swapped points and Cormac Finn also found the target to leave it at 2-10 to 0-8.

And then O’Grady struck for the first of his two rasping goals to leave the score at Craobh Rua leading by 2-10 to 1-8.

However, any hoped a late rally were dashed when another long ball into the Letterkenny square was fielded by full-forward Ryan Lewis who crashed a glorious strike to the net.

And even though O’Grady found the net again the winners were very well worth their 3-10 to 2-8 victory.