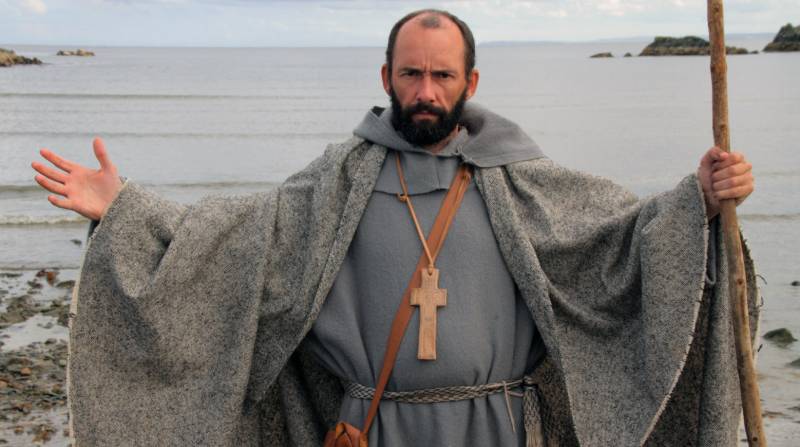 Colmcille – An Naomh Dána, a documentary celebrating 1500 years since the birth of Colmcille is to be aired on 7th December on TG4.

The documentary will take the viewer from Donegal to Iona in a quest for the truths within the myths surrounding Donegal’s finest son, troublemaker, copyright infringer, warrior and exile, yet one of Ireland’s most revered saints – Colmcille.

Though known by many as the Dove of Peace, he was at the centre of bloody battles, before founding a monastery on Iona, laying the foundations for the island to become a beacon of civilization in the Dark Ages – he’s even said to have taken on the Loch Ness Monster!

But who was Colmcille, the Irish abbot, known in Scotland as St. Columba? His exploits as poet, scribe, politician, warrior, and holy man, became notorious throughout Ireland and Scotland. This exciting new documentary, explores the man, the myth, and his legacy today.

Born in Gartan, near Lough Gartan in Co. Donegal in 521 A.D, Colmcille seemed to attract trouble. After clashing with Finnian over the copying of a manuscript he went into exile, founding a monastery on Iona that became a renowned centre of spirituality and learning. Today Colmcille is revered as one of Ireland and Scotland’s major saints and texts about him have made an important contribution to our knowledge of life in the era.

Chief Executive of Northern Ireland Screen’s Irish Language Broadcast Fund Áine Walsh said: “Colmcille is recognised as an Irish saint and a Scottish saint and has left his mark on the folklore and landscape of both countries and as a result the Irish Language Broadcast Fund was delighted that this project came before us and to commemorate 1500 years after the saint’s birth.

“Not only did it provide an opportunity to explore the life of the bold saint, but it also provided another opportunity to strengthen the links between Ireland and Scotland on a significant program which will be broadcast on TG4 and BBC ALBA. Partnerships like this are very important in our efforts to deliver engaging and high-quality content, and this program certainly meets that criterion.”

The feature documentary will air simultaneously on Tuesday 7th December at 9:30pm on TG4 and on BBC ALBA in Scotland including the BBC iPlayer in the UK and worldwide on the TG4 player