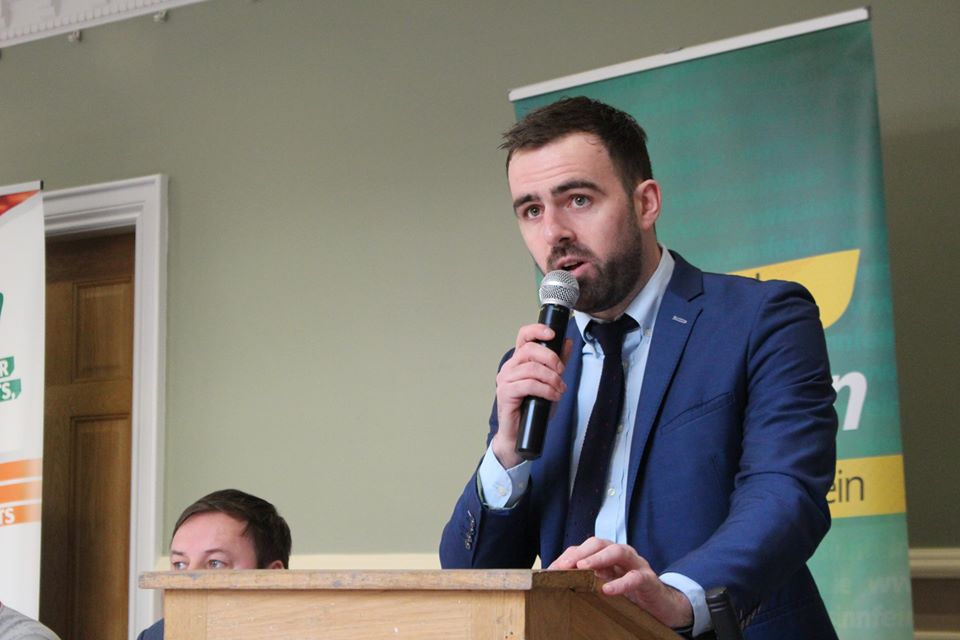 Members of the North West Strategic Growth Partnership held a virtual meeting this week to discuss the cross border approach being taken by Councils to the overall Green Transformation of the North West City Region.

Reports outlining the achievements to date under the North West Development Fund, and the key shared priorities for the region, were also provided at the meeting. The Partnership meeting is held twice yearly, and was attended by officials from both the Northern Ireland Executive and the Irish Government and civic leaders and officials from Donegal County Council and Derry City and Strabane District Council.

The North West Strategic Growth Partnership is a cross-border regional development structure, the only one of its type on the island of Ireland, and operates in conjunction with and supported by The Executive Office and The Irish Government. It was first established in 2016 through the North South Ministerial Council, to drive the sustainable growth and development of the North West City Region in recognition of the need for a cross-border approach to the Region’s future as a net contributor to the economies of Ireland and Northern Ireland.

Jointly led by Donegal County Council and Derry City and Strabane District Council, and chaired by the two Mayors, the meeting was supported by the International Centre for Local and Regional Development (ICLRD).

The main focus of the meeting was a joint presentation on the North West City Region’s strategic plans for Collaborative Opportunities for Green Transformation. Delegates heard how COVID 19 has presented decision makers with an opportunity to deliver the change necessary to address climate and ecology emergencies and how the two Councils were working in close collaboration to achieve strong economic growth through circular zero waste and resource efficient initiatives. Setting out details of the roadmap for the North West to become a carbon neutral region by 2045, members heard how a number of actions are required on a shared island basis in order to achieve this aim. These include political support and alignment on policies, support through the education system, the sharing and harmonisation of data, and funding to facilitate a green future.

As part of the detailed presentation senior officers from both Councils spoke about the work they are doing through the NWRDG Green Transformation and Climate Action Working Group to deliver on the targets set out for the public sector in terms of energy efficiency and a reduction in carbon emissions. Officials also outlined the development of a cross-border energy agency to drive not only energy efficiency measures but also to support the region in developing it capacity for clean energy production. The meeting heard that the key to reaching carbon emissions reduction targets is to embed climate action in every policy, decision and operation and through widespread engagement and consultation so that there is shared learning and understanding.

An Cathaoirleach of Donegal County Council, Cllr Jack Murray said the meeting was another example of positive cross border collaboration on important issues. He said it was imperative that the two Councils continue to drive forward their ambitions for a green transformation in the region.

He said: “The two Councils are to the fore in terms of the environment and the green economy and the work done to date is really impressive. It shows the strength of the partnership and acknowledges that as well as having a shared geography, we also share the same challenges. It is more important than ever that we continue to work together to come up with solutions to protect our shared environment.”

Mayor of Derry City and Strabane District Council Alderman Graham Warke, speaking after the Partnership meeting said it was hugely important for this partnership to meet and discuss progress on all priorities for the region. He said the NW city region was in a truly unique position having senior Government officials working in direct partnership with the two Councils to drive forward ambitious plans for the region. Mayor Warke said he particularly welcomed the focus on green infrastructure and the work being done at a collaborative level to bring forward a strategic and joint approach to climate change and plans for a green transformation.

He said: “Today’s meeting was very interesting and it was great to hear at first-hand about the work that is being done at a senior level between Council officials and senior Government representatives on a range of high level projects and initiatives for this region. I was particularly encouraged to hear about the work being done to bring forward a carbon neutral region by 2045 and the efforts of the two Councils and the relevant agencies to work together to protect the environment and biodiversity through a circular and zero waste economy.”

Attendees at the meeting also received an updated report on the achievements to date under the North West Development Fund and the key shared priorities for the region with updated actions and position from each of the Government departments on the NI Executive. A representative from the office of An Taoiseach provided a detailed report outlining the Irish Government’s commitments and priorities set out in the Revised National Development Plan and its ongoing commitment to the continued support of the work of the North West Strategic Growth Partnership and the North West Development Fund in collaboration with the Northern Ireland Executive.

John G. McLaughlin, Chief Executive of Donegal County Council described the meeting as hugely informative and beneficial in further strengthening links between the two Councils, its partners and the two Governments.

Extending a sincere thanks to everyone participating in the meeting, Chief Executive of Derry City and Strabane District Council John Kelpie said while it was disappointing the group could not meet in person it was imperative that the strong links between senior government officials and the two Councils are retained and developed further. Re-emphasising the importance of collaboration and a joint approach, John Kelpie said the strong working relationship between Derry Strabane and Donegal is key in aligning all of the strategic policy plans going forward.