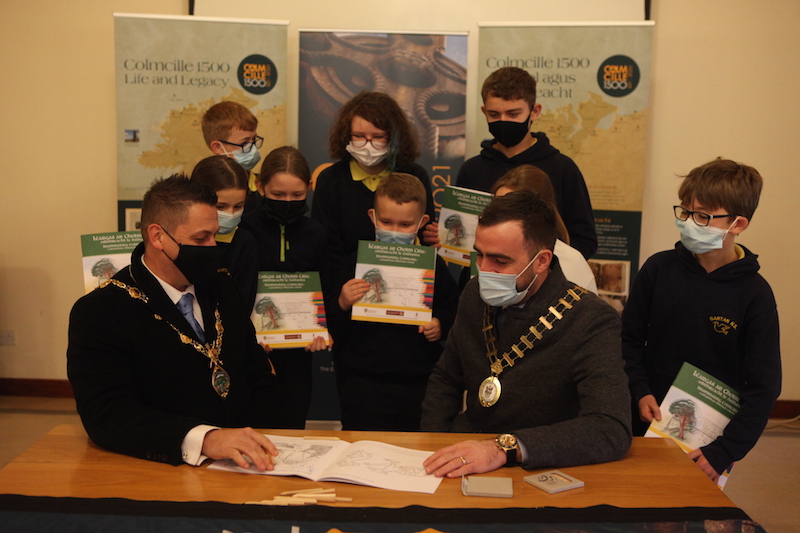 Colmcille’s 1500th birthday was celebrated at his birthplace in Donegal today, in a symbolic cross-border event, which was part of a year-long programme by Donegal Council Council and Derry City and Strabane Council.

The event premiered a digital folklore animation project, which engaged a new generation of children in keeping the iconic saint’s legacy alive.

The event was addressed by the Cathaoirleach of Donegal County Council, who co-ordinated the programme, and the Mayor of Derry City and Strabane District Council (DCSDC).

Cathaoirleach, Cllr Jack Murray said it was “very special to commemorate Colmcille’s 1500th birthday here at the Colmcille Heritage Centre in his birthplace of Gartan.” 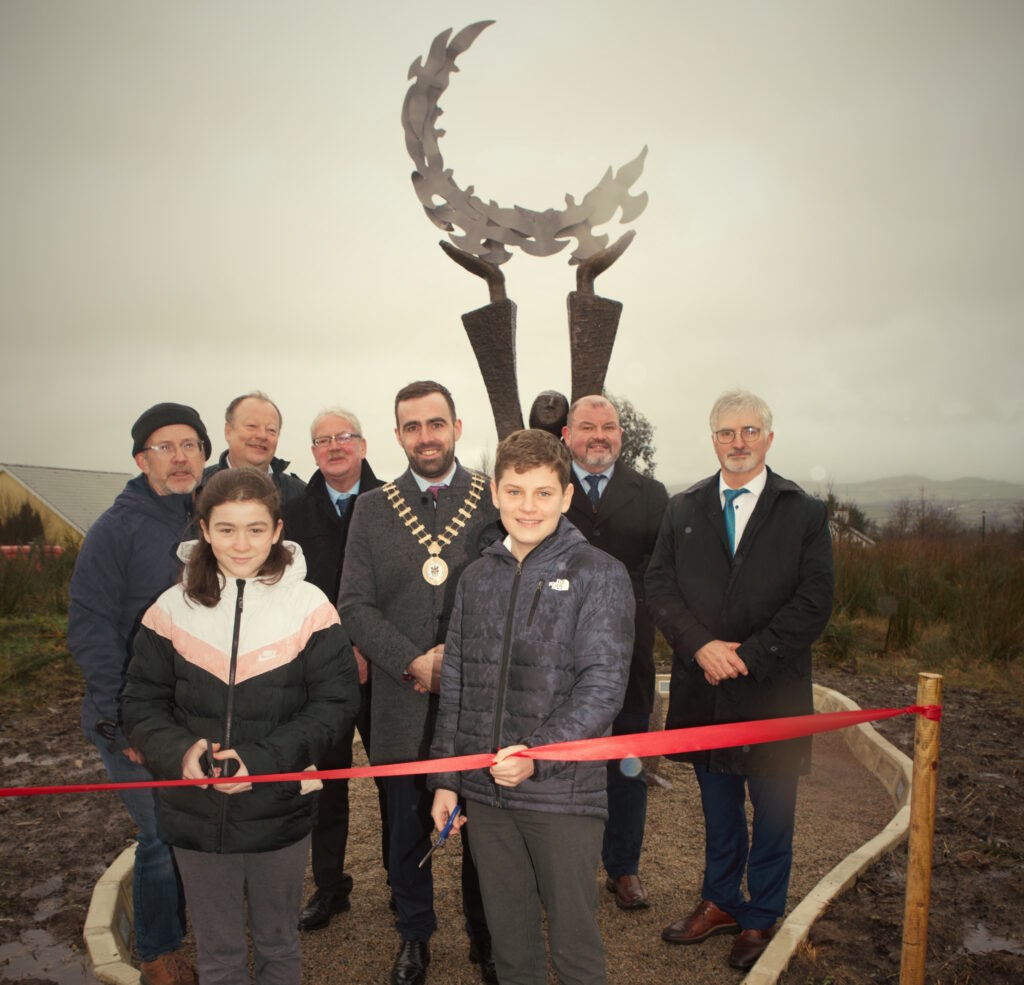 “Our two councils have come together with local church leaders to commemorate this 1500th anniversary with other local, regional and national partners. This birthday celebration today marks the culmination of a series of 120 events and activities over the past year, which commemorated Colmcille’s remarkable life and legacy.

“These included concerts, exhibitions, films, plays, conferences, conservation works to Columban heritage sites, audio guides, publications, lectures and other performances. We are delighted that despite COVID, we managed to use online and virtual events to bring Colmcille to not just local and regional but to national and international audiences too.”

The Mayor of Derry City and Strabane District Council, Alderman Graham Warke, said that birthday celebrations planned for the City that evening “The ‘Light of the Dove’ that were cancelled due to the weather warning would be re-scheduled when feasible.

The event will see the grounds of the Long Tower Church come to life with a stunning light installation, accompanied by dance, poetry and performances by local musicians to create a walk-through experience themed around hope and looking to the future.”

The Mayor said An Cathaoirleach would be joining him for the event, which has been co-ordinated by the North West Carnival Initiative (NWCI), In Your Space and Studio 2. “It will be a special and poignant evening to remember a figure who has such a prominent place in local history” he said.

The birthday event at the Colmcille Heritage Centre was also attended by primary schoolchildren from Gartan National School, one of 20 schools who participated in the digital folklore animation project.

The project was led by Donegal County Council Library Service, in partnership with library authorities in Sligo, Meath and Libraries NI. 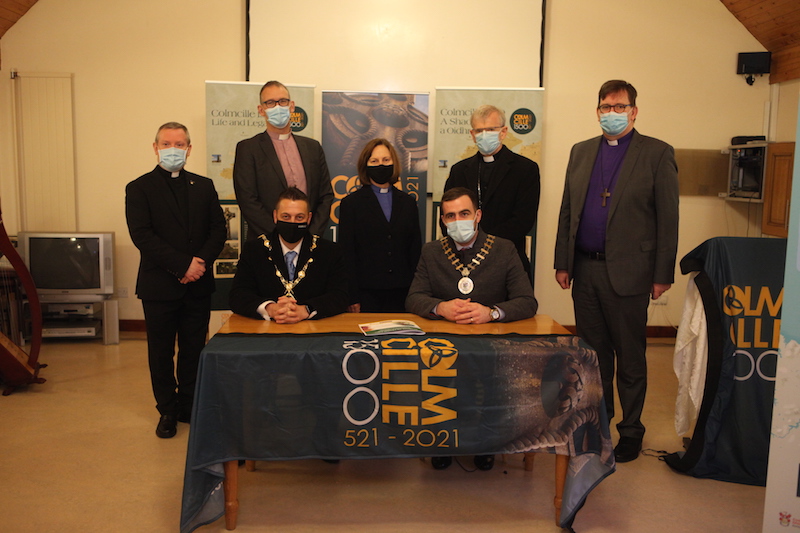 Eileen Burgess, DCC’s Culture Divisional Manager, said the project “upskilled teachers to help children research Colmcille’s life and to create the digital animations. The children’s animations have been developed into an illustrated comic which we launched digitally today. The comic takes a light-hearted look at the folklore and legends of the Donegal saint.”

Ms Burgess said she was delighted to announce two other launches today: a new illustrated map of the key sites in Ireland and Scotland linked to Colmcille and an Irish-language audio guide of Donegal heritage sites associated with St. Colmcille that explores aspects of his life and legacy. 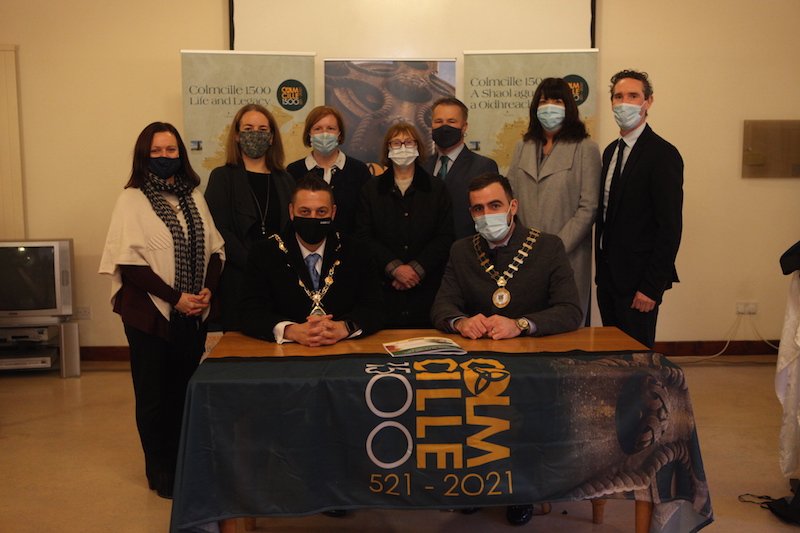 After the Gartan event, the Cathaoirleach unveiled a commemorative 4m bronze sculpture of Colmcille at Kilmacrennan. The sculpture was commissioned as a Percent For Art Project and funded by Transport Infrastructure Ireland as part of the N56 Coolboy to Kilmacrennan Road. Artist Niall Bruton captured the essence of the Saint as a monk-like figure standing proud and strong against the elements, arms heavenwards with a crescent of doves. The sculpture is surrounded by decorative kerb stones created in workshops with Scoil Cholmcille National School in Kilmacrennan and Coláiste Ailligh in Letterkenny.

The day’s celebrations ended with digital projections at the Guildhall Square in Derry as part of an illuminations project ‘Coinneal Cholmcille (Columba’s Candle)’, in partnership with Foras na Gaeilge and local authorities across Ireland and Scotland to illuminate locations linked to Colmcille. Projections in at the Colmcille Heritage Centre and St. Colmcille’s Chapel in Gartan are to be re-scheduled due to the weather warning.