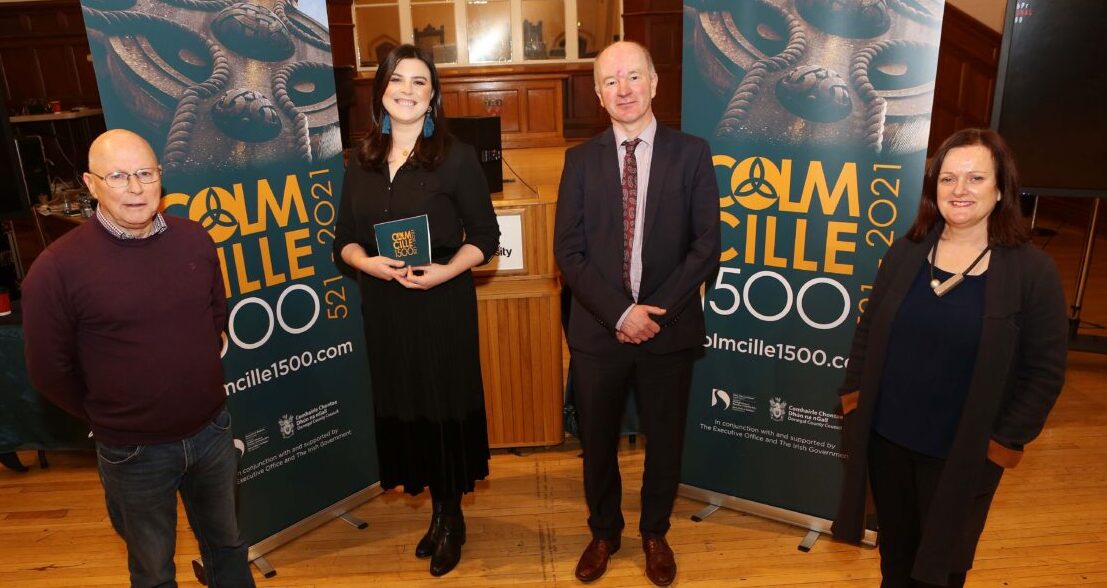 A global audience tuned into the Great Hall at Magee Campus at the University of Ulster in Derry this week to mark St. Colmcille’s 1500th birthday.

Colmcille 1500 is a year-long commemoration marking the 1500th anniversary of the birth of Colmcille. St. Colmcille, also known as St. Columba – the Latin form of his name – was born in Gartan County Donegal in either 520 or 521 A.D.  He died in Iona Scotland in 597.

The virtual event combined video, dance, documentary, poetry and discussion with two expert panels taking part. The Irish panel was made up of Prof Malachy Ó Néill, Professor of Irish and Director of Regional Engagement at University of Ulster, Magee Campus, Dr Brian Lacey, Archaeologist, and Historian and Christy Gillespie, author, historian and former principal of Scoil Cholmcille, Termon in the heart of Colmcille’s local area.

This particular event charted Colmcille’s life’s journey from Gartan to Scotland and back to the Causeway Coast area before his return to Iona.

“We are so proud to have been able to include this event in a year-long series of celebratory occasions. There is so much history and now legacy between the North West and Scotland bound by our Colmcille connections. This will be a legacy event to build on remarkable legacy by the Donegal-born patron saint.

“I want to thank our esteemed panel members and our host Áine Ní Bhreisleáin of Radio Na Gaeltachta who did a superb job in keeping online audiences engaged for over two hours.”

Video contributions came from Donegal, Derry, Kells, Durrow, Sligo and Causeway Coast & Glens as well as Argyll, Iona and the Western Isles in Scotland. Ending the 2-hour event was a video from a new legacy project originating in Donegal called Slí Colmcille Camino. Described as an ambitious project, it is establishling a pilgrimage linking key sites related to St Colmcille from Donegal, Derry, the North Sperrins and the Bann to Argyll and eventually the island of Iona.

You can watch the event replay on the Colmcille 1500 North West Facebook Page https://www.facebook.com/Colmcille1500NW/.