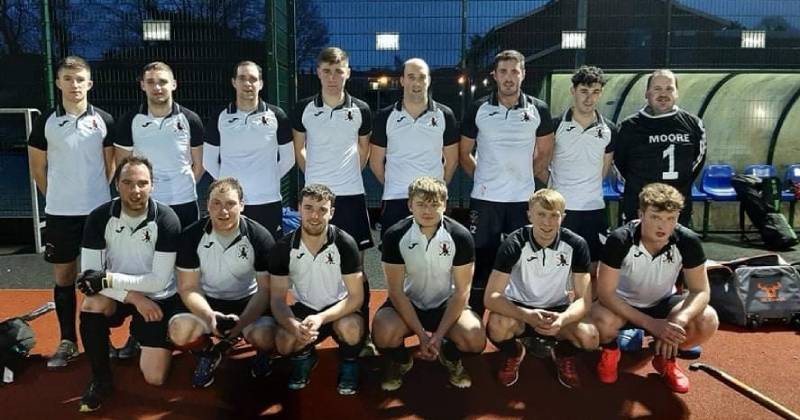 Raphoe lose out to South Antrim in Kirk Cup

After a week off last week, Raphoe were on their travels again with a trip to South Antrim in their 2nd Kirk Cup group game.

With a few players absent, Raphoe took the opportunity to use this game to prepare for their remaining premier league games, a few tactical tweaks from Lee Stewart worked well for the majority of the game.

The first two quarters were extremely tight encounter, both teams matching each other throughout the pitch. A strong defensive display from West, Moore & Meehan ensured the score stayed at 0-0 going into half time.

In the 3rd quarter Raphoe started to find the gaps through Antrims rearguard, Tom Eaton & James Wilson winning a couple of penalty corners. Simon Goudies first effort saved by the goalie and his second superbly cleared off the line.

As the 3rd quarter came to an end, Raphoe lost the ball while on the attack, Antrim found themselves 3 players to the good against Raphoe, James Wilson having no choice but to concede a penalty corner. From the resulting corner, Davy Moores save deflected unfortunately onto Alan Meehans foot on the goal-line, penalty stroke awarded and dispatched by Antrim midfielder Adam Glass.

Raphoe thought they had equalised straight away, a smart quickly taken free by George Patterson who drove at the heart of the Antrim defence, his pass found James Wilson who squared it for Luke Johnson to finish superbly. After long protests from the South Antrim players, the umpires came to a decision that the initial free was taken from the wrong place and play was brought back and goal disallowed.

Raphoe entered the final quarter needing two goals for the win but two early sin bins for Simon Goudie & Evan Lyttle left Raphoe with only 9 players on the pitch, South Antrim capitalised late on with two penaly corners before the end, James Brown & Daniel McElhinney with the goals leaving a harsh scoreline of of 3-0 to South Antrim.