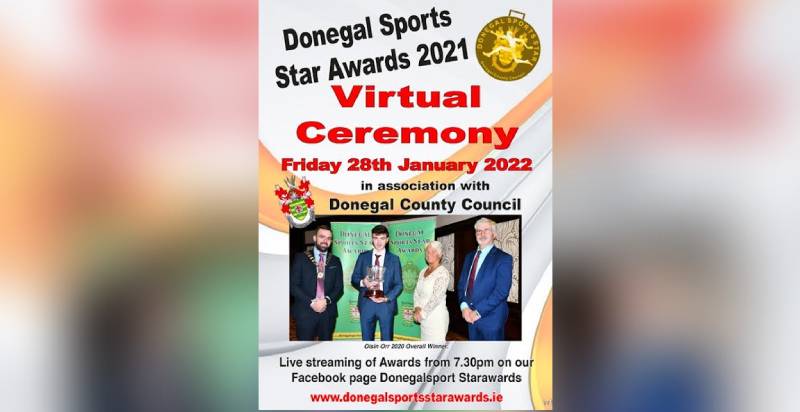 The 2021 Donegal Sports Star Awards have been launched by the reigning Overall winner jockey Oisin Orr.

The awards are going virtual again due to Covid-19 with the show taking place on Friday night, 28th of January at 7.30 p.m.

The 2020 Overall winner Orr said it was a great honour to be asked to formally launch the event.

Orr said: “It’s a very nice honour to be doing this for the committee and I hope that all sports people will watch the award winners being announced on the night.

“I didn’t expect to be the Overall winner last year and it’s something that I always remember. To be picked as the best in Donegal is something very special. It was great for my family back at home who had given me so much support going back to the pony racing days in Rathmullan.

The Rathmullan man was the first jockey to win the Donegal Sports Star Overall Award in the 45-year history of the event. Orr enjoyed another decent season in 2021 recording 24 wins and it might have been more only for the fact that he broke his hand in a race at Navan in September.

Donegal Sports Star Awards Chairperson said the live launch in the Mount Errigal Hotel had become a very big part of the event build-up in recent years. However, due to the pandemic that wasn’t possible for the second successive year.

“Oisin was a most deserving Overall winner last year and the committee is delighted that he has now launched the 2021 Awards. I wan to wish him well for the 2022 racing season. We’re going virtual again and work is continuing on finalising all the awards in the next week or so.

“A lot of time is also going to make sure we are ready to go on Friday 28th and we want to see the sporting public tuning in at 7.30 to see the stars of 2021 being honoured” the Donegal Sports Star Awards Chairperson said.

Once again Donegal County Council is the exclusive sponsor and their support is key to the success of the awards which will be staged for the 46th time.

“We really appreciate the Council’s support and they have really backed when the decision was made not to break the link last year when the live function could not be held because of the pandemic.

“The committee decided to go with a virtual awards and that decision was given full support by Chief Executive John McLaughlin. We thank him very much for that and it is full steam ahead now to get ready for the second virtual awards.”

The first Donegal Sports Star Awards were held in November 1976 in the Milford Inn.