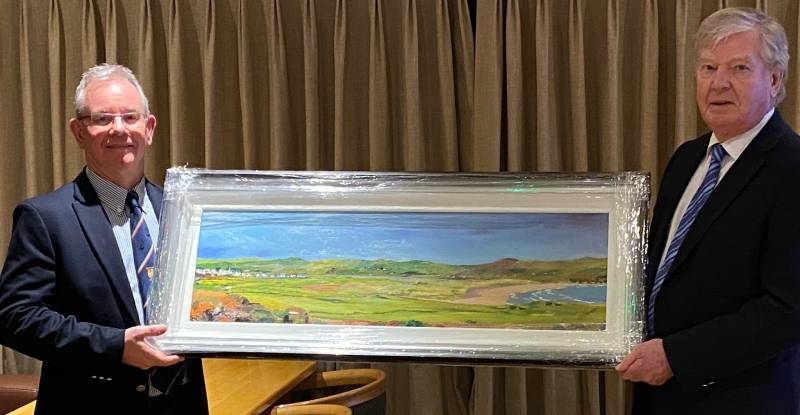 Dunfanaghy Golf: Change of captaincy as Bill McCallion steps down

Dunfanaghy Gold Club held their AGM at the end of December as they thanked many outgoing committee members, including captain Bill McCallion who was presented with a painting of the view from their Donegal home.

The full statement from Dunfanaghy Golf Club is below:

The Annual General Meeting of Dunfanaghy Golf Club was held on Thursday 30th December at 5pm as over 70 members attended via Zoom and listened to encouraging reports from the Captain (Bill McCallion), Treasurer (David Tease) and Secretary (Pat O’Neill), all of whom spoke positively of the financial and overall position and direction of the club.

Dunfanaghy Golf Club is very fortunate to have a small, but extremely dedicated, number of permanent employees who, together with the many volunteers, have the member and visitor experience at their core. As we enter a third year disrupted by Covid, we applaud all who have been involved in the club and who have willingly served on committees.

To be financially stable in such uncertain times is a testament to David Tease’s financial expertise and the hard work and common sense of the committee under the guidance of Captain Bill.

As Bill steps down from his role and hands over to incoming Captain Colm Donaghy, it is appropriate to thank all those who are stepping down from the committee.

Our thanks go to Paul Burton, John McKendry, Denis Martin, Aidan Fox, David Tease, Pat O’Neill, Gerry McGreevy and Mal Johnston.  Paul, John and Denis have all served as Captains while Denis has just completed two years as President. Gerry‘s wise legal counsel has been invaluable, especially recently, while Mal steps back from his role as PRO, having kept us informed of the Club’s activities for 5 years, thanks to his diligence in communicating via a range of different social media.

Aidan has contributed much to the club over his long period of volunteering and delivered a body of work which covers Digital Mapping of the course, interaction with Donegal County Council, positioning of Tee Boxes and course drainage. As they leave, all will be proud to be leaving the Club in a better state than when they first
joined the committee.

Outgoing President Denis presented Bill and Paula with a painting of the view from their Donegal home, painted by member Kieran McTaggart and made this short speech:

“I speak on behalf of the Committee. We would like to recognise the immense contribution which both of you have made to the Club over the last two years. Yours was the first husband and wife captaincy, and little did you know what lay ahead as a consequence of Covid. Despite all the drawbacks, you have overseen and guided the Club development on so many fronts and thankfully you bravely took on a second term of office in these exceptional circumstances, which has provided continuity and stability.

“Thanks to you, the Club is in a strong position, but many challenges lie ahead. On behalf of the Committee and members I would like to present you with a token of our appreciation of your unique contribution to the life of this Club.”