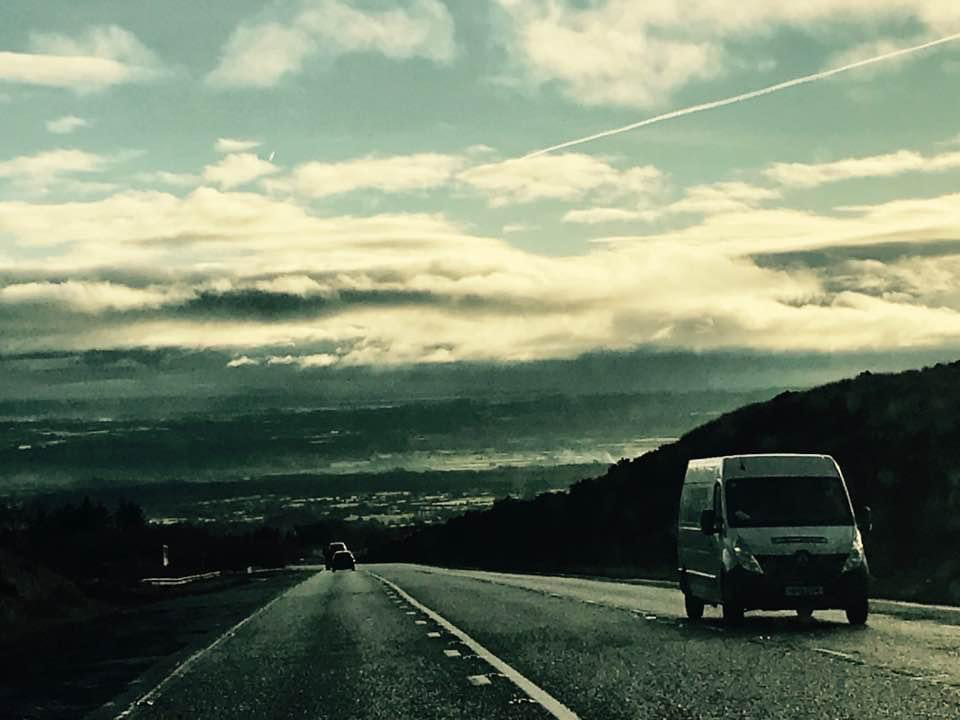 ‘Look at them old fashioned forks and knifes’ my passenger remarks as we wait for our meals to arrive.

‘They don’t look one bit old fashioned to me,’ I reply.

‘I love tea made in a pot like that’ I say, as I give the two tea bags a stir before letting the tea draw for a while.

My passenger has ordered a glass of orange juice and has taking a big drink out of it but now is saving the rest for when his meal arrives – battered sausages and chips.

As I pour my perfect brew of cafe tea from a stainless tea pot, knowing that this will spill if I’m not careful, my passenger is trying to tune into the stream on his phone at the end of the Liverpool match. We watched the first half at home on the telly and Fabinho scored before the break and we headed on our way. Young Chamberlain scored the second as we crossed the Port Bridge as we listened to it in the van radio and the streaming my passenger was watching on his phone which was a few minutes behind shows us the goal at the Dry Arch.

‘Is this the normal way we go’.

‘Nah I’m going to try and grab a bite to eat before we head up the road’, I replied

‘I was thinking we were on a different road I never seen that mountain before’ my passenger suggests as he looks in the direction of Inishowen.

When the battered sausage and chips arrived, I ordered the all day breakfast with scone bread instead of toast.

On the other side of a perspex divider an elderly couple are in for their evening tea. The two of them just breezed past the ‘wait to be seated’ sign that were were standing at, they looked as if they were regulars they had a big pot of tea for two and a slice of toast each the sat beside each other rather than across the table probably out for a wee Sunday spin.

He looked like Hannibal Lecter when he fitted his full face shaped see-through mask. Before he got up to leave the table the woman with him walked out with her blue disposal mask in her hand ready to place it over her mouth if a look from someone forced her to do so. 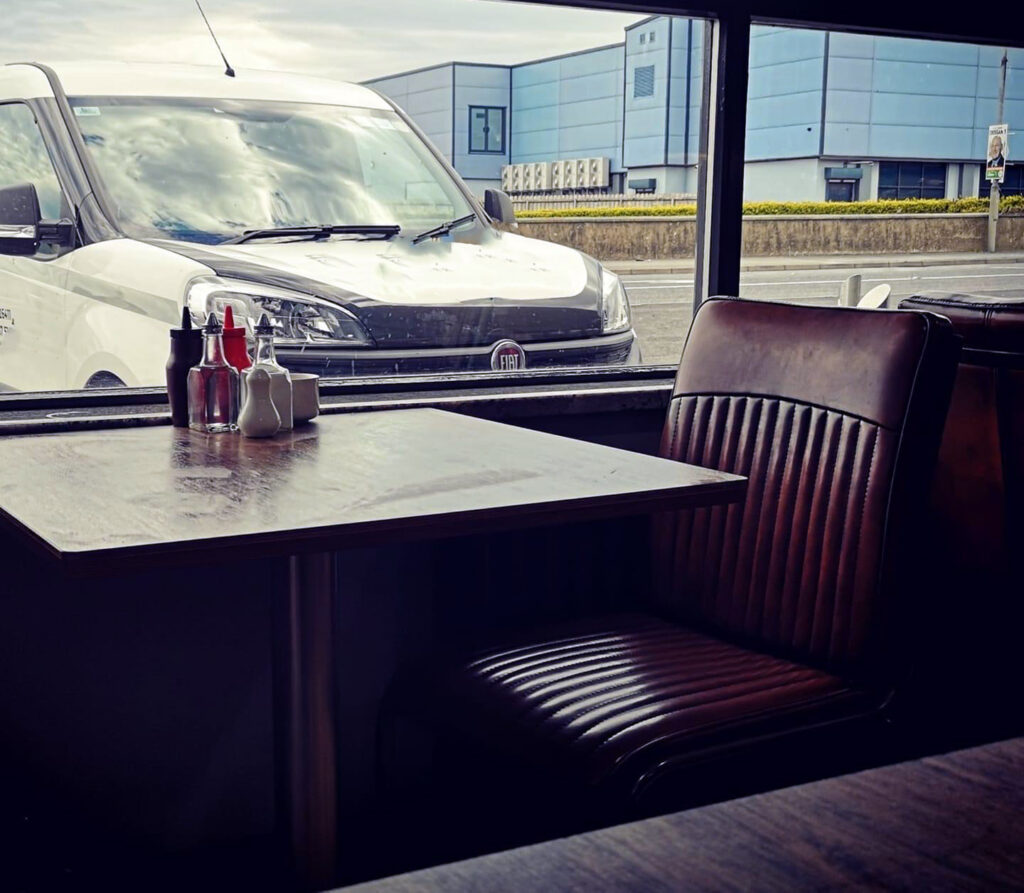 A roadside cafe that refills you with more than food of road trips of years gone by. Photo Brian McDaid.

As they headed off in their car we headed across the Donegal/ Derry border bound for Belfast. Ongoing roadworks between Derry and Dungiven for the last few years are nearly completed on the A5 and in time the new road will bypass the Town of Dungiven. At present the road occasionally is temporarily guided onto one of the lanes of the new dual carriageway. For me it kind of reminds me of driving through the north years ago in the times of the troubles when roads were detoured through security checkpoints on all border crossings. When the town of Dungiven is bypassed there will be no towns to drive through between leaving Derry and arriving in Belfast. Years ago the drive to Belfast or even a trip to collect or leave someone to Aldergrove Airport (now called Belfast International Airport) was a big deal from Letterkenny. That brief time on the motorway keeping a close eye for the first turn off up and over the motorway heading through Antrim Town before arriving at the airport was a challenging drive for a young Donegal man who never drove on a motorway before.

The breath-taking view on the road to Belfast from the height of the Glenshane Pass. Photo Brian McDaid.

It’s a wee bit easier today thanks to the likes of Google maps which we pop in the address of our destination to on the M2 and as the road dropped down into the out reaches of Belfast, a view I always love to see night or day with maybe a massive ferry making it way up Belfast Lough, the audio from the maps app on my phone brings the radio to silence as it gives me guidance into one of the five inbound lanes into the city. A half a dozen more instructions and were at the front door, passengers safely delivered. A cuppa in student accommodation and it is not long to a short location to get me out of the city is dialed in as I look for the eagles on Spotify.

Don’t let the sound of your own wheels drive you crazy.
Lighten up while you still can, don’t even try to understand,
Just find a place to make your stand and take it easy.

I saw them live in the Odyssey Arena in 2008. I’m on the flyover looking across at that venue where they played as I pump up the music.

I never imagined I would ever hear and see the Eagles live and they didn’t disappoint. ‘Stay on the M2 for twenty two miles’ is the last instruction I get from Google maps as I exit the app from here on down as I head through Seamus Heaney country and and on up the road and start to climb Glenshane pass with the dust of the gritters blowing around on a freezing night, I think of days as a passenger with my father as he would head into a hill in his ESB lorry and he would talk to the lorry he was driving as the engine would start to labour. 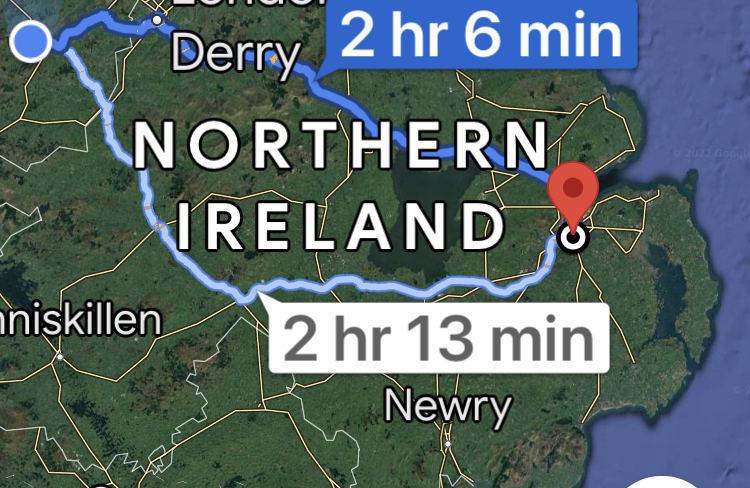 Google maps taking you on your journey.

‘I suppose you want changed’ he calls as he doubles the clutch to a lower gear. With only me and the Eagles I as my wee van the same question as we pull out over the Hill and past the Ponderosa and hopefully into a better year and gear than the year that went before us.

Or call into that lovely cafe on the way up the road earlier that evening tops us up with more than food for the road, it reminded me of me as a passenger with my late father on a journey on a different road up the Sligo and calling into a wee cafe in Grange village called ‘Willie’s Cafe’  Chicken ‘n Chips, tea, bread and butter was the order for us both as we sat watching life going by enjoying a perfect view out the back window of the cafe of Benbulben waiting for a big new stainless teapot in the days to draw before we poured out or tea. The building that the cafe once worked out of is still along the road side in Grange but the cafe is long gone. All that is left are memories of spending a bit of time together as a father and son on the road through life’s journey. I’m soon across the border and back on our own dual carriageway into Letterkenny. I pull in briefly onto the hard shoulder and dial in an old song that my mother would change in words on and do the same as her as I climb the hill belting the song out with Al Jonson before Letterkenny comes into view. 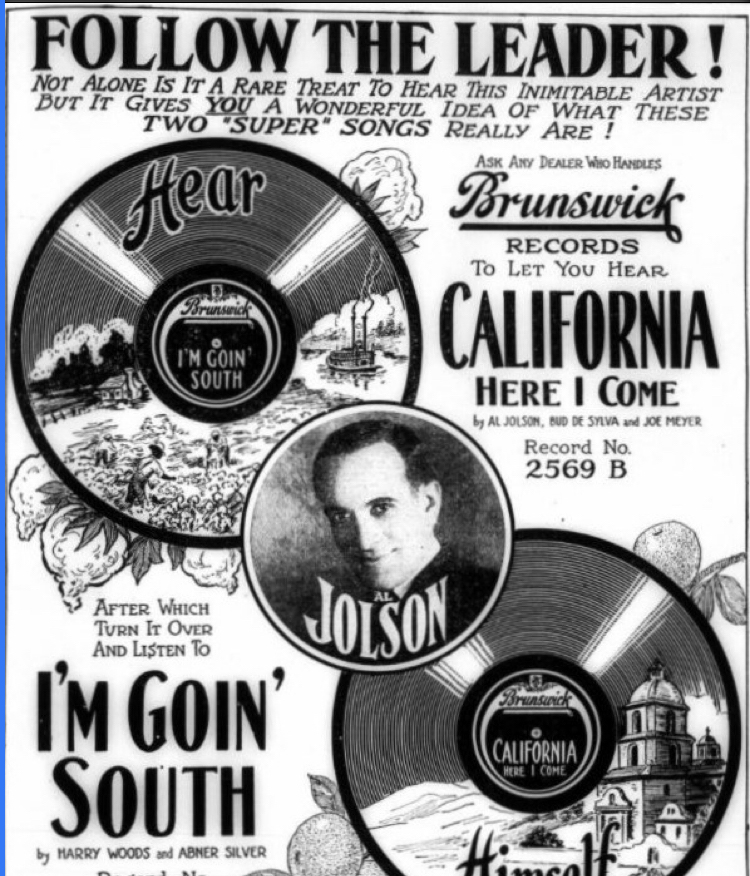 Letterkenny here I come ,
right back where I started from ,
the flowers,  the flowers,
that bloomed in the sun …