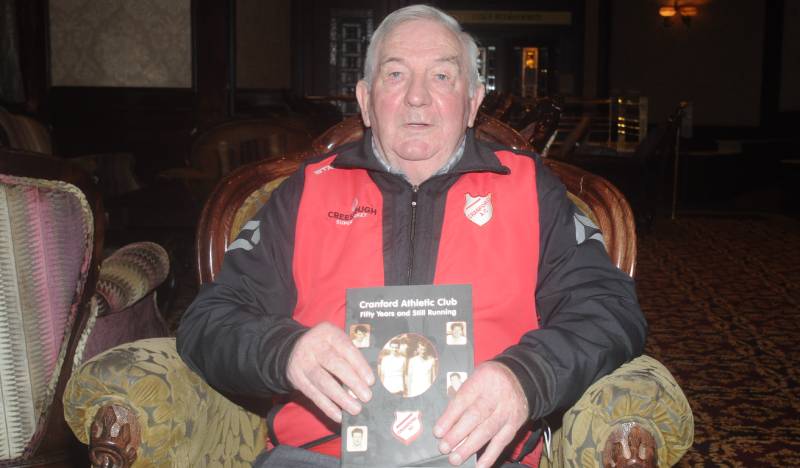 Cranford Athletic Club stalwart Eamon Giles will become the 46th inductee into the Donegal Sports Star Hall of Fame when the Virtual Awards take place on Friday the 28th of January.

It is fitting that in the year that he turns 80 Giles is being honoured for six decades of dedication to the sport of athletics. His name is already written into the history books of Donegal athletics as a founding member of the first club in the county in the winter of 1961.

That was a remarkable achievement for a 19-year-old who drove the project and overcame a series of obstacles on that journey. Eamon didn’t do it on his own and he is anxious to emphasise that.

The late Jim Hunter is one man who certainly comes into that category. It was a two-man committee of Giles and Hunter when the club was officially affiliated to the Ulster Athletics Board in December 1961.

Giles said: “To be receiving this Hall of Fame is really a great honour for me. I never expected to get it. I know the likes of Patsy McGonagle a great friend of mine got the Sports Star Hall of Fame before so I am really pleased to get this award.”

By the time Cranford AC was officially affiliated to the Ulster Athletics Board, Giles had already been building teams to compete. Milford men Paddy Marley and the late Hugo Duggan were key signings. Patsy McGonagle who went on to found Finn Valley joined up along with the McDaid brothers Danny and Neily and the Hunters Bill and Jim.

A lot of local young men bought into the Giles dream and it led to a string of success in the 1960s and 70s first at junior and then senior level in Ulster. The ladies became a big part of the Cranford AC story and they hit the headlines big time in the early 1980s with a couple of provincial team titles while Rose Gavaghan won the Ulster senior individual cross-country race a remarkable three years in a row (1981-83). Another woman Bridie Trearty went on to represent her country in the Masters category. 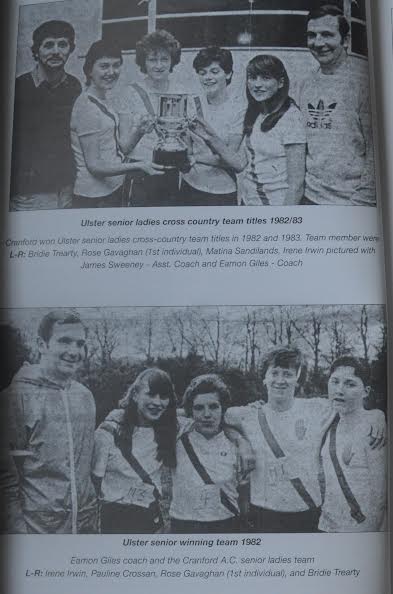 Rose Gavaghan has been a stalwart of the club ever since and is a key member of the Cranford coaching team along with Ernie McElhinney. The club has for many years now focused almost exclusively on juvenile athletes and that has brought some great days in competition at county, provincial and national level. Oisin Kelly (Kilmacrennan) and Caolan McFadden (Creeslough) are two of the current bunch of young athletes who have excelled.

It was remarkable that Eamon Giles, a man in his early 20s could combine competing with coaching and managing an athletic club. He was a very good sprinter excelling in the 100m and 200m distances. Eamonn won a number of Ulster 200m titles and was runner-up in a handful of 100m finals. He was a member of the Defence Forces and that saw Eamon enjoy success in the 110m hurdles at the All-Army National Championships. Indeed if Giles had the luxury in the 1960s of focusing exclusively on competing he feels he could have got much closer to achieving more national success.

When his running days were over he devoted much of his free time to coaching at Cranford and that hard work has paid off with Ulster, Irish and international success as hundreds of athletes reaped the benefits of being involved with a unique rural club. Every week of the season Cranford AC is out competing at events in the county and across the country. Eamon got his love of sports and training from his father, a former Kilkenny hurler and army officer.

Jim Giles moved north when he was posted to the Rockhill Barracks in Letterkenny. He settled locally after marrying Madge McClafferty. His dad had a grounding in fitness and stamina training that he had learned from his hurling days and also in the army. That had a huge influence on Eamon even as a small boy. He began competing at all the local sports days and it was well worth it if you were able to win with money being a prize rather than trophies.

Hugo Duggan, Paddy Marley,  Jim and Bill Hunter, and Pat Marley were young men also competing at the time. Eamon was thinking about the club formation and knew that those lads would be the cornerstone of turning that dream into a reality. 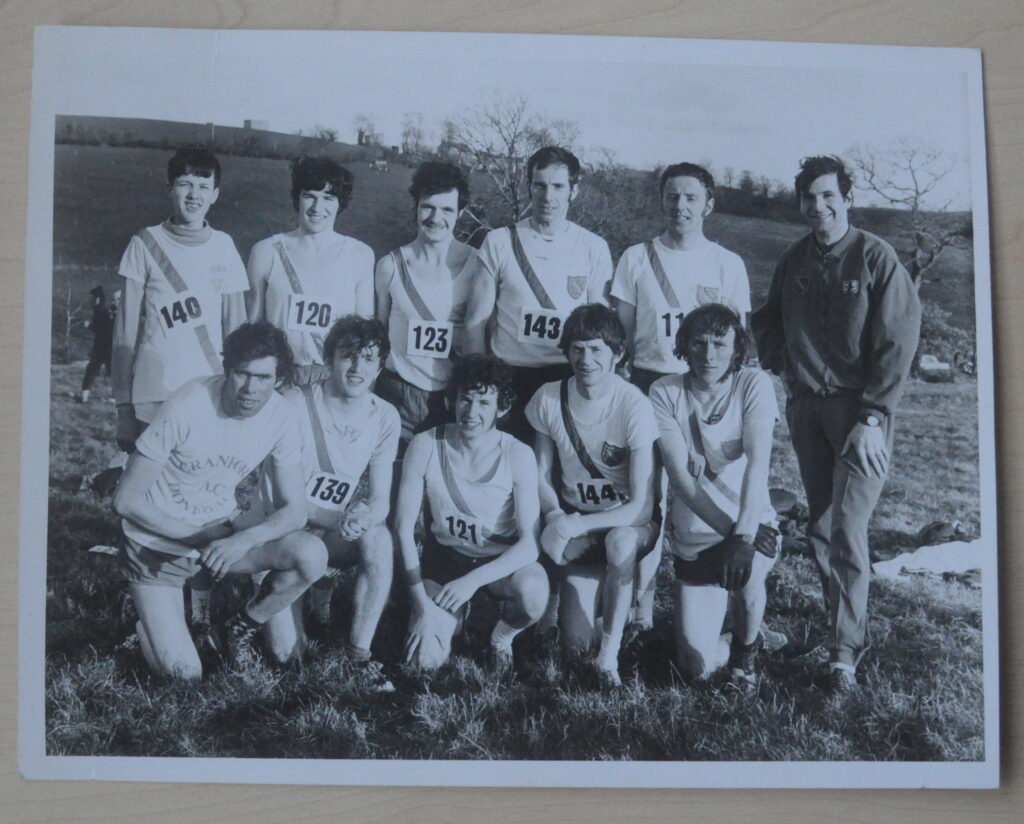 However there were many challenges ahead but Giles was not going to be sidetracked in following his dream. Cranford was a rural area and it was a long journey to the north for competitions. Money was needed to run a club but raising finance was going to be tough in a bleak economic environment.

Eamon Giles was also seen as too young and inexperienced to be running an athletics club. That meant very little local support to back the ambition of the 19-year-old.

Eamon was undeterred by the negativity although with the benefit of hindsight he does acknowledge that the older more experienced people at the time had made some valid points about the potential pitfalls.

The Derry Journal had been carrying reports about the Oak Leaf Club who were ranked the best in Ulster at the time. That prompted Eamon to write to the editor of the Derry Journal and he got an address for the secretary of Oak Leaf Hubert Logue. He was very helpful in providing the right information to form a club. The final step was to make the application to the Ulster Athletics Board and it was successful.

Club training was going well and in 1963 Eamon felt it was time to give his men their first big test. An Oak Leaf team was invited to take part in a road race in Cranford on St. Patrick’s.

The visitors were too good but it was a yardstick as to where the new club was in their development and there was a confidence that the potential was there to improve a lot.   Cranford’s first success was in Belfast in November 1963 in the seven and half mile “Black Mountain Climb.

In January in 1964, Cranford made the trip to Strabane and took the Ulster Junior ‘War Memorial’ title. More Ulster and National successes followed for the men in the red striped vest of Cranford AC. Every title was so special to Eamon Giles and he’s as passionate today as he was 60 years ago about developing athletes and seeing them reach their true potential.

He’s down coaching youngsters a couple of nights a week at their training ground in Rosapenna courtesy of hotel owner Frankie Casey while Creeslough businessman Danny Lafferty has been the club’s main sponsor for 25 years.

As he heads towards his 80th birthday Eamon Giles retains that enthusiasm for the sport and thinks nothing of getting on the road with teams every weekend during the season. Eamonn was a founding member of the Donegal Athletics Board.

Eamon Giles was selected as a member of the Donegal Athletics Team of the Millennium and was inducted into the County Board’s Hall of Fame two years ago.

The Cranford club attracted athletes from all over the county and within eight years three Cranford athletes Paddy Marley, Hugo Duggan and Danny McDaid were representing Ireland at senior level.

Eamon Giles will be the 46th inductee into the Donegal Sports Star Hall of Fame when the awards takes place virtually on Friday night the 28th of January starting at 7.30 p.m.