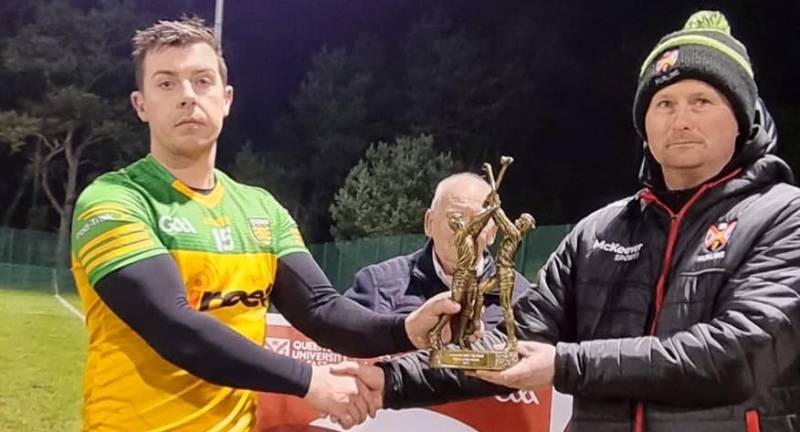 “The best team lost” for it was sheer and utter cruel heartache as Donegal were denied a famous victory by a tremendous comeback from 14-man Down in extra time.

A last gasp free in the 78th minute from Paul Sheehan gave 14 man Down a thrilling victory over a gallant Donegal side who dominated most of the second half.

The Down fans and players could scarcely believe their luck as Antrim referee Cormac McCloskey did not give Donegal a chance to reply as he immediately blew time as Barney Lafferty rifled over what would have been a late leveller.

But Down certainly got out of jail as the Mourne men trailed by 2-17 to 0-18 three minutes from time.

Enter super sub Marc Fisher who crashed a 21 metre free to the net and suddenly we had a game on.

And even though Gerard Gilmore got another point for the gallant losers, Down were unstoppable as Fisher and Co. went for the jugular.

Two goals in each half from Donegal’s man of the match Davin Flynn looked to have the Tir Conaill men to their first ever Conor McGurk Cup over 14 man Down on a greasy and bumpy Dub venue.

Fabulous Flynn struck with deadly effect in the 11th and 50th minutes as they surged clear in the second half.

But they were just not able to match Down in those final frenetic moments.

Down sprung from the traps like an electric hare and the wristy Paul Sheehan pointed after just seven seconds.

That sharp start set the pattern for early Mourne dominance with two snappy points from the lively Oisin McManus and the burly Pearse Óg McCrickard after just three minutes.

Davin Flynn opened Donegal’s account in the sixth minute, and he and full-forward Ritchie Ryan had further points as Sheehan nudged Down into a 0-5 to 0-3 lead.

The impressive Pearse Óg McCrickard then angled over a fine point before Down struck a big road block in the 12thminute.

Centre back Caolan Taggart was given a straight red card after an incident with Ryan on the sideline.

Undaunted, the Mourne men eased into a 0-7 to 0-3 lead thanks to the inevitable Sheehan.

But then Ronan McDermott won a ball in a ruck of Down players and found Flynn in clear space on goals.

The ice cool ex-Tipp Intermediate star flicked the ball to the net to level the scores.

Donegal took the lead for the first time in the 25th minute through Conor Gartland and a fine effort from Josh Cronnolly McGee as they nosed ahead by 1-8 to 0-9.

But the Down men made light of their numerical disadvantage and were a bit unlucky to be only drawing with Donegal at the break on a score of 1-9 to 0-12.

Referee Ciaran McCloskey played a total of 42 minutes in this half as he blew up three minutes early and then we had four minutes of added time to the bemusement of some fans.

And it looked like Donegal had done enough for an historic victory as they led for 37 minutes until Fisher and Co. finished a memorable night for the Mourne men.

It was so frustrating for Mickey McCann’s men as they controlled most of the second half until Fisher’s late goal from a free that sparked a remarkable comeback from Down.

But Mickey McCann and Co. can take mighty positives as they clearly showed they can mix it with the very best.

And, for them, the very best could yet be to come.